Being family: What Latino Catholics can teach the rest of the U.S. church about community 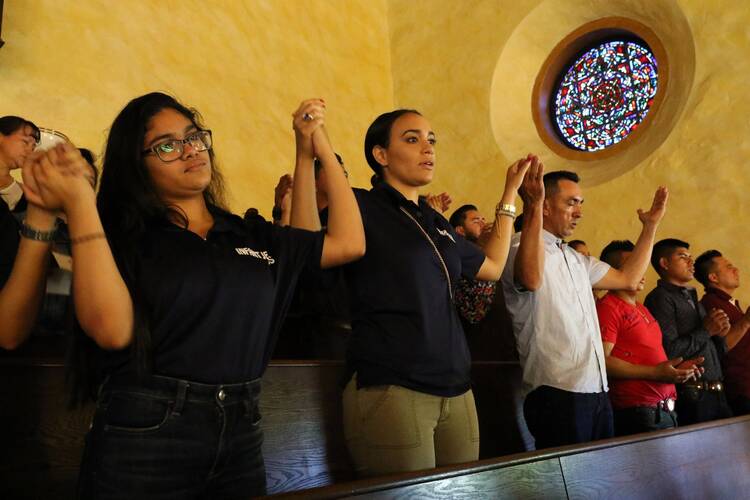 The only reason I joined a Bible study group as a freshman at my Catholic college in Texas was because one of the leaders had a Hispanic last name. I figured that maybe she also spoke Spanish and we could be friends. (She did not, but we became friends anyway.)

Looking back now, I recognize what I was hoping to find in the group. I was not only looking for God in Scripture but also longed for community and real connection. What first-year student doesn’t? Luckily, I found it with that small group of women, and I became close with all of them over the following four years.

I was not only looking for God in Scripture but also longed for community and real connection.

When I graduated from college, I moved to Toronto, where I did not know a single soul. And I found myself yearning for the same thing: a community, a family. Transitioning from a life full of family and friends into one of solitude was difficult. Not only did I have to deal with the culture shock of a new country, I had to figure out how to nourish my faith on my own and in English, my least preferred language to worship in.

So I searched for a home in the most logical place: my parish’s young adult group. And it was...fine. They offered the sacraments and adoration and the occasional praise and worship session, which are all beautiful experiences. They offered lectures and fellowship at the local pub—again, perfectly fine evenings. But I was looking for something more. I ended up dreading those weekly events even while recognizing that those were the only times I was engaging in any sort of fellowship.

Even now, I wonder why “young adult” gatherings elicit cringes from me. But a new survey of young adult U.S. Catholics, to be released this fall by the Center for Applied Research for the Apostolate, touches on what I now realize was missing from these groups: a safe space where one can be vulnerable, be honest and feel at home.

A new survey suggests that Spanish-language groups are perceived as warmer, more familial, intergenerational and relationship-driven.

One of the things the survey does is highlight differences between Spanish-speaking and English-speaking Catholic faith groups. The responses suggest that Spanish-language groups are perceived as warmer, more familial, intergenerational and relationship-driven. English-speaking groups are seen as more goal-oriented and individualistic; they are more likely to be organized around a liturgical season, or to be defined by age, political or cultural interest, or anything else that can divide Catholics. From my experience, this rings true.

We often discuss the problem of young people leaving the church. I wonder what would happen if, instead of focusing on numbers, we focused on building lasting relationships and cultivating the church family to be just that: a family where everyone is welcome, regardless of age, race, sexual orientation, language, or marital or immigration status. To get there, the English-speaking church in the United States could learn a lot from Latino Catholics.

When we focus more on the intellectual, we tend to want to “do things right” or “win” at being Catholic. This frame of mind leads to more division and judgment.

As the CARA survey indicates, Hispanic faith groups, like almost all Hispanic groups, operate on the principle that estas en familia (“here you are family”). Latinos pride themselves on the deep relationships we cultivate with our family members and the extranjeros we can welcome into the fold. Even when I am away from my own family, I am welcomed by Latinos I encounter in public (like food service workers), in my church community and at work. We are en familia wherever we go.

I struggled to feel this “at home-ness” in the English-language faith groups I attended. They skewed more intellectual. This is an important aspect of our faith life, but when we focus more on the intellectual, we tend to want to “do things right” or “win” at being Catholic. This frame of mind leads to more division and judgment. And it leaves little room for the Holy Spirit.

The whole point of being Catholic is that there is no single answer, as my current spiritual director once told me. This realization freed me to live in the ebb and flow of daily life, leaning into all its interruptions because it was exactly in those interruptions that I found real connection.

This is something Pope Francis explores deeply in “Fratelli Tutti”: the necessary but often missing connections between faith, family and community. “To care for the world in which we live means to care for ourselves,” Pope Francis writes. “Yet we need to think of ourselves more and more as a single family dwelling in a common home” (No. 17).

Eighteen months into a pandemic that has left us starving even more for real and tangible connections, we should take heed of the examples of Latino Catholics, who can encounter love, joy and communion in a family that extends to far more than just those who share our DNA.

[Survey: A third of young Catholics expect to attend Mass less often after the pandemic.]