The Editors: Is it time for the U.S. to hold a plenary council? 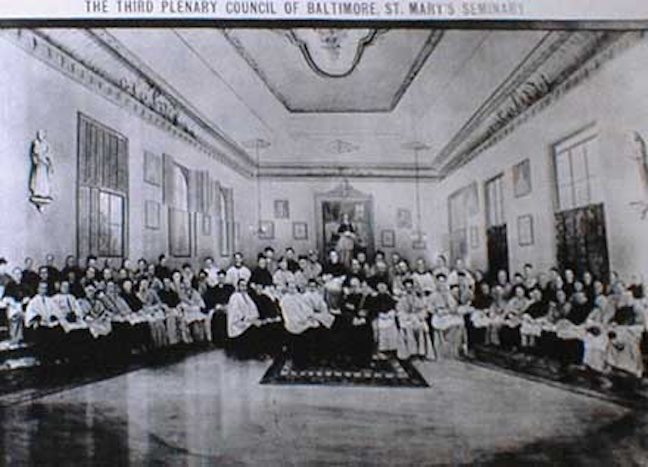 Attendees at the Third Plenary Council of Baltimore of 1884, the last such gathering in the United States. (Wikipedia Commons).

For the first time in history, in 2020 fewer Americans belonged to a church, mosque or synagogue than did not belong. Only 47 percent of U.S. adults now identify as members of a traditional religious home, down more than 20 percentage points in only two decades. Much of the decline correlates with a rapidly accelerating growth in “nones,” those who express no religious affiliation. Among people who belong to a specific church, the decline in Catholics (to 58 percent from 76 percent) was twice as much as among members of Protestant denominations (to 64 percent from 73 percent).

The decline in church affiliation is also steeper according to age—only 36 percent of millennials belong to a church, compared with 58 percent of baby boomers and 50 percent of Generation X—as well as education and political affiliation. Non-college graduates showed a more pronounced drop in church membership than those with college degrees, perhaps reflecting the church’s struggles to reach the working class. And both Democrats and political independents have seen greater declines in membership numbers than Republicans did.

For the first time in history, in 2020 fewer Americans belonged to a church, mosque or synagogue than did not belong.

Any one of these patterns of decline, in isolation, could be used to argue for a particular diagnosis and proposed remedy on the part of religious organizations seeking to evangelize—or simply to stem the tide of departures. The “rise of the nones” could suggest that the problem is a general dynamic of “secularization” that needs to be met with a more robust public apologetics and renewed emphasis on catechesis; this could dovetail nicely with blaming the steeper decline among younger generations on failures in catechesis or on changes in theological emphasis and church discipline following the Second Vatican Council.

Alternatively, the recognition that religious doubt now leads more quickly to abandonment of church membership, rather than lukewarm practice in the pews, could be used to argue for a renewed focus on smaller communities of more intense practice to serve as leaven within a world that is more ignorant of any kind of faith. Or it could lead to demands that the church more quickly respond to the signs of the times by modifying its teachings and practices on any number of issues where it is seen as out of step with the prevailing culture, treating disaffiliation as a kind of testimony against the church’s presumed failure to listen to what the Spirit has been saying through the sense of the faithful.

On the political front, the relatively more stable churchgoing of Republicans could suggest that the problem is hostility toward religion in politically progressive circles, meaning the church might need an even greater emphasis on defending religious liberty against threats from government intrusions. Or the greater decline among Democrats could suggest that the church’s tendency to find common cause with the Republican Party because of the bishops’ focus on abortion as a pre-eminent priority among social issues is functioning as a scandal and stumbling block to those who reject other Republican positions, or Republican candidates, as immoral.

The pattern of decline in church membership and religious practice ought to convince everyone concerned with evangelization that our existing responses have proven woefully insufficient.

The steeper decline among those without college degrees does not lend itself as easily to sweeping diagnoses and prescriptions, which might explain why it has generally received less notice and discussion. Yet any implication that for some reason, the consolations of faith are more available to those who are already at greater material advantage in our society ought to cause believers in the Gospel to spend sleepless nights wondering if we are more in touch with the rich man feasting than with Lazarus, outside his gate.

Regardless of the sufficiency of any explanations or proposed reforms, this pattern of decline in church membership and religious practice, already decades long and apparently now sharply accelerating, ought to convince everyone concerned with evangelization that our existing responses have proven woefully insufficient. The problem is not that one group within the church has the right diagnosis and the rest of the church is failing to listen to them. The problem is that the whole church needs to recognize more deeply that we—both communally and individually—are struggling more and more to evangelize the contemporary world. Increasingly, the message of the Gospel is being heard as an unnecessary imposition or a mere absurdity rather than as the good news of freedom from sin and death and the inauguration of God’s kingdom of justice and peace.

However we are moved to preach the Gospel, and whatever reforms we believe are necessary for the church to evangelize more effectively, Catholics must begin with a thorough examination of conscience about our existing efforts. Even more, we must listen to other Catholics, to those outside the church and to those who have left the church in order to learn how those efforts have been failing. Perhaps the best and most effective witness the church could offer to the world would be openness to such conversion as an expression of our abiding faith, rather than continuing to insist that our existing analyses are sufficient.

The task before the Catholic Church in the United States is an enormous one. It will require the talents and the toil of every part of the church.

The editors of this magazine have published countless “What is to be done?” editorials and essays on this topic since its founding; in our first issue on April 17, 1909, the editors fretted that “our Christian dogmas are coming to be the subject of scoffing doubt” and decried “the loose manner in which the vital doctrines of Christianity are handled among us to-day.” No doubt they would be deeply dismayed by the religious landscape we survey today. But in recent years developments in other areas of the church have suggested a new possibility. What if we followed the example of the bishops of Germany, Australia, Ireland and elsewhere and called for a regional gathering of Catholics—from all corners of the local church—to discuss the flaws and future of evangelization? In addition to acknowledging the value of subsidiarity in our decision-making, it could also truly open our ears to hear what has worked and what has failed to work for the people of God.

The task before the Catholic Church in the United States is an enormous one. It will require the talents and the toil of every part of the church. An event like a plenary council or other national gathering could be an effective catalyst for creative new approaches.

Whatever form it takes, the data is clear: It is essential that the church reorder its pastoral priorities and initiatives and align them with a new evangelization to meet the unique challenge of 21st-century America. The U.S. church must not fail to meet this moment. “We have to find a new way,” Pope Francis said in his 2013 interview in America, “otherwise even the moral edifice of the church is likely to fall like a house of cards, losing the freshness and fragrance of the Gospel.”