Pope Francis to populist leaders: Do not use the cross for political purposes 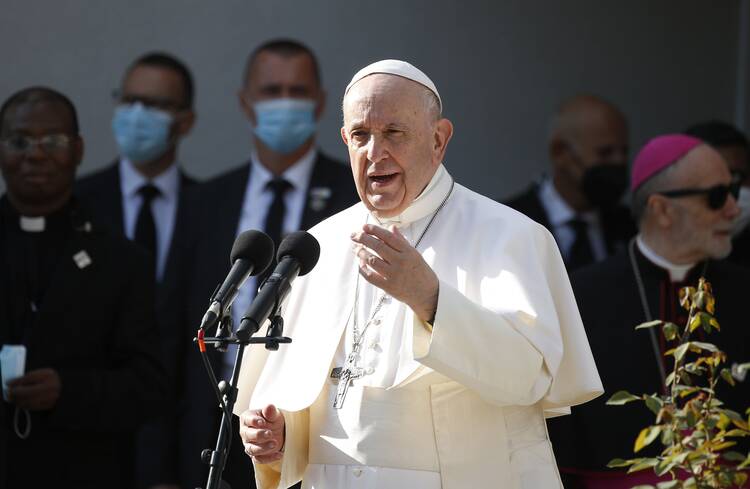 Pope Francis speaks during a meeting with the Roma community in the Lunik IX neighborhood in Kosice, Slovakia, Sept. 14, 2021. (CNS photo/Vatican Media)

“Let us not reduce the cross to an object of devotion, much less to a political symbol, to a sign of religious and social status,” Pope Francis said in an inspiring homily in eastern Slovakia on his third day in the country, challenging the tepid religiosity of many and the use of the cross for political purposes by populist leaders in Europe and elsewhere.

“The cross demands instead a limpid testimony. For the cross is not a flag to wave but the pure source of a new way of living. That of the Gospel, that of the Beatitudes,” the pope told his audience of 30,000 Greek Catholics gathered on a sunny day at the Mestska sports square outside the city of Presov, at the foot of the Tatra mountains, though his message was intended for the whole nation and beyond.

Francis had traveled here early in the morning, flying almost 200 miles from Bratislava to preside at the Byzantine Divine Liturgy on Sept. 14, the feast of the exaltation of the Holy Cross. In honor of the feast day, the pope and the other bishops present wore red vestments. The liturgy was enriched by singing, chanting and music that created an almost mystical atmosphere.

Last Sunday, in Budapest, the pope had focused his message on the centrality of the cross in Christian life and community. He did so again today in Slovakia, where 73 percent of the six million inhabitants are Catholic, with most being Roman Catholic and a minority of about 250,000 Greek Catholics.

The pope’s message on the meaning of the cross resonated with the Greek Catholic community, whose members suffered harsh persecution and were prohibited to exist under Czechoslovakia’s Communist rule from 1948 to 1989. Today they cheered, waved yellow and white scarves (the colors of the Vatican), and chanted “Honor to Jesus Christ!” when Pope Francis arrived and drove among them in his popemobile before the eucharistic celebration.

The pope began his homily by quoting St. Paul, “We proclaim Christ crucified,” a sign of “the power of God and the wisdom of God,” and said the apostle “does not hide the fact that, in terms of human wisdom, the cross appears as a ‘scandal’ and ‘foolishness.’”

“In the eyes of the world, the cross represents failure,” the pope said, “the latest proof that the course of events in our world does not change: The good are cast aside, and the wicked prevail and prosper.”

He reminded Slovak believers that they, too, can fall into the temptation of seeing the cross as a failure. “How often do we long for a Christianity of winners, a triumphalist Christianity that is important and influential, that receives glory and honor? Yet a Christianity without a cross is a worldly Christianity and shows itself to be sterile.”

He reminded them that the apostle John, who stood at the foot of the cross and whose Gospel account of the crucifixion was read before he spoke, “saw that despite appearances, Jesus is not a loser but God, who willingly offers himself for every man and woman.”

Francis continued: “Jesus could have saved his life, he could have kept his distance from the misery and brutality of human history. Instead, he chose to enter into that history, to immerse himself in it…so that no one on Earth should ever be so desperate as not to be able to find him, even there, in the midst of anguish, darkness, abandonment, the scandal of his or her own misery and mistakes. There, to the very place we think God cannot be present, there he came. And now, with him, we are no longer alone, ever.”

Francis told those present, and those watching on national television, “Crucifixes are found all around us: on necks, in homes, in cars, in pockets.” But, he asked, “What good is this, unless we stop to look at the crucified Jesus and open our hearts to him…and we weep before the God wounded for love of us?”

“Let us not reduce the cross to an object of devotion, much less to a political symbol, to a sign of religious and social status,” the pope said. “If we fix our gaze on Jesus, his face comes to be reflected on our own: His features become ours, the love of Christ wins us over and transforms us.”

“Let us not reduce the cross to an object of devotion, much less to a political symbol, to a sign of religious and social status.”

Speaking about the nation’s Christian martyrs, he said, “How many generous persons suffered and died here in Slovakia for the name of Christ!” Francis said, “Theirs was a witness borne out of love of him whom they had long contemplated, to the point that they resembled him even in their death.”

Yesterday, at Saint Martin’s Cathedral in Bratislava, the pope recalled the heroic witness given during the Communist era by the Jesuit cardinal, Ján Chryzostom Korec, who is buried in Nitra, about 100 miles from where he spoke today. Cardinal Korec worked for 39 years as a priest without government recognition, working as a laborer alongside those he ministered to and serving time in prison.

The pope reminded the Greek Catholic faithful, “You have seen such witnesses” to the faith.

“Cherish the memory of those persons who nurtured you and helped you to grow in the faith. Lowly, simple persons who gave their lives in love to the end,” the pope said. “These are our heroes, the heroes of everyday existence, and their lives changed history.”

“That is how the faith is spread,” he continued, “not with worldly power but with the wisdom of the cross, not with structures but with witness.”

Looking to the audience, he said, “Today the Lord, from the eloquent silence of the cross, is also asking each of you—you and you and me—‘Do you want to be my witness?’”

That afternoon, Francis visited the Roma settlement Lunik IX in the district of Kosice, Slovakia’s second-largest city. It is the largest Roma settlement in Europe; 4,300 Roma people live here in squalid conditions, without basic services, health care or education. The Salesians of Don Bosco have worked in the area since 2008, and the pope visited their house today.

The Roma are a nomadic people who have lived in the region for almost 700 years and have suffered discrimination for centuries and today.

Pope Francis asked to come here, and the government reluctantly agreed. It did not want this aspect of the country highlighted, and so it gave the area a facelift before his arrival. Despite the outward improvements, the community’s situation remains dire. Francis hoped his visit, by highlighting the plight of the Roma, might contribute to change.

Greeting them with the help of a translator and listening to their testimonies, the pope recalled that in 1965, Paul VI had told a community of Roma, “In the church you are not on the margins.… You are in the heart of the church.” Pope Francis added, “In the church, no one ought ever to feel out of place or set aside.”

“The church is your home,” the pope said, “and I say to you with my whole heart, you are always welcome!”

Pope Francis acknowledged that the Roma have “all too often been the object of prejudice and harsh judgments, discriminatory stereotypes, defamatory words and gestures and, as a result, we are all poorer, poorer in humanity.”

“It is not easy to leave prejudice behind, even for Christians,” he said. “It is not easy to value others, especially if we see them as problems or enemies, if we pass judgments without making any effort to get to know them and to listen to their stories.”

“Restoring dignity means passing from prejudice to dialogue, from introspection to integration,” which is “the path to peaceful coexistence,” the pope said. Integration, he told this community that is largely segregated from the rest of Slovak society, is “an organic, gradual and vital process that starts with coming to know one another, then patiently grows, keeping its gaze fixed on the future.” He encouraged all those engaged in the “prophetic work” of encounter and integration and assured them they have his backing.

From Lunik IX, Pope Francis drove to the Lokomotive stadium for the final event of the day, a meeting with 20,000 young people who had been preparing for his visit all day, practicing songs and dances. They gave him an ecstatic welcome as he drove among them in the popemobile, and he appeared to enjoy every moment, even stopping the popemobile to kiss a baby.

20,000 young people preparing all day in Košice’s Lokomotiva stadium, September 14, for arrival of Pope ⁦@Pontifex⁩ after his meeting with the Roma community pic.twitter.com/aSXGRHLf7q

Tomorrow morning, Francis concludes his visit to Slovakia by going to pray and celebrate Mass at the national Marian shrine of Our Lady of Sorrows, after which he will drive to the airport to take the plane back to Rome. En route, he is expected to give a press conference.

While all eyes during the trip have been fixed on the pope’s health following his July colon operation, Pope Francis has shown in these days that he appears to have recovered from his operation and even seems rejuvenated. As Cardinal Leonardo Sandri told my wife, Elisabetta Pique, the Rome correspondent for the Argentine daily La Nacion, yesterday, “With this trip, he has shown that the operation is a thing of the past.”