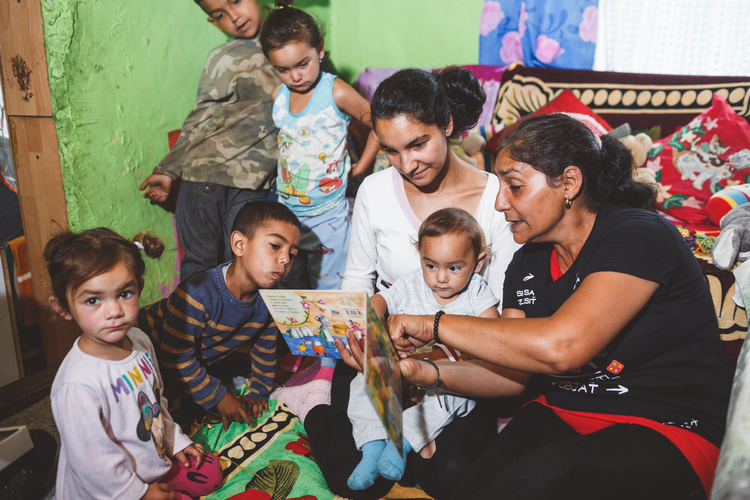 Roma women working with the Omama program read to children. (Photo provided by the author)

Lunik IX is the largest Roma settlement in Slovakia. Pope Francis visited it today as part of his apostolic journey to the country. With the pope’s focus on marginalized communities, this choice comes as no surprise: It is the Roma people who have been the most systematically “discarded,” to use Francis’ term, ethnic group in Slovakia. Those living in Roma settlements have been left hanging by a thread as the country has made its way out of the Communist era into the European Union, with its economic growth being compared to those of the “Four Asian Tigers”: South Korea, Taiwan, Singapore and Hong Kong.

A third of the over 380,000 Roma in Slovakia live in romske osady, which translates literally to “Roma settlements.” These are shantytowns not dissimilar to the villas miseria in Francis’ native Argentina, favelas in Brazil, or slums or trailer parks in the United States. Notorious for high unemployment and low education levels, “osady” have become islands of inescapable deprivation in an economically prosperous country. Many Roma begin to slide into the cycle of generational poverty in the first months of their lives. Constant stress, malnutrition and dire living conditions negatively impact social, emotional and cognitive growth in the crucial first three years of life. Once they enter the system of compulsory education, which would in ideal conditions improve their social mobility, it is already too late.

This is where Roma women come in. If you ask about their desires for the future, the answer is almost unanimous: a better life for their children. As for improving their own lives, they are already resigned. Typically getting pregnant in their early teenage years, they have lives inevitably structured around securing a basic livelihood for their families. With an unemployment rate as high as 80 to 90 percent, Roma women cannot rely on their husbands to provide financial security. Alcohol abuse is rampant among men.

Recently, the plight of Roma women has taken on a tragic global dimension. They have been some of the most likely victims of human trafficking from the east to the west of Europe, with girls as young as 16 years old being sold (sadly, not infrequently, by their own relatives) for prostitution.

From the perspective of political elites, the situation of Roma women seems close to unsolvable. As government after government has failed to tackle the situation, the “Roma issue” has been exploited by populists and neo-Nazi extremists, for whom the Roma are an easy scapegoat. Large Roma families and pregnant Roma women have become symbols of how Roma, the populists claim, “exploit” the state’s generous social security system.

But the situation is different in civil society. Indeed, nongovernmental initiatives, religious or secular, have emerged as the most effective programs. And Roma women have played a crucial role. The recent success of the “Omama” (Hungarian for grandmother) program is a case in point.

Omama focuses its efforts on the most vulnerable—young mothers and preschool children. Its mission is to train Roma women in early child development methods. These women then help their fellow mothers develop the youngest children (up to 3 years old), paying weekly visits to families with small children, organizing parent clubs and giving counsel to pregnant teenagers. In doing so, the “Omamas” prepare children in settlements for a smoother transition into elementary education.

The Omama program's mission is to train Roma women in early child development methods, mindful of the distinctiveness of Roma culture.

Mindful of the distinctiveness of Roma culture, the program is based on “the participatory approach and the involvement of Roma women.” As Oľga Shaw, one the founders of the program argues, “It is important for us to make a distinction between the Roma culture and its specific features and the so-called culture of poverty which can be recognized universally in different parts of the world.” Unfortunately, Ms. Shaw said, “These two are often referred to interchangeably, which often leads to the creation of negative stereotypes about the Roma minority.”

Roma culture is thus not something to discard, but rather serves as a springboard for further development. Roma women have co-created learning methods and tools with the Omamas. “Many activities use tools and objects which can be found in any Roma household. For instance, Omamas have written nursery rhymes in Romani and used them to aid language development,” Ms. Shaw explained.

The project is not affiliated with any church, but according to Shaw, religion provides Roma women with something essential: hope. Religious affiliation also gives the Roma women “a sense of belonging.” It is this sense of belonging and acceptance that “helps them overcome the feelings of isolation, of being alone with one’s problems,” Ms. Shaw said.

Roma women are changing, but so is the surrounding non-Roma community. As Shaw and her co-workers have observed, Omamas are “respected for being the agents of positive change in their communities.” Their results are appreciated by local teachers, physicians and mayors. Their work has gained national acclaim. Zuzana Caputova, the country’s president, has given the project consistent support.

Omamas reflect much of what Pope Francis envisions as an effective way to help those in need. By visiting the Lunik settlement, the pope has acted on his own appeal to “seek out others and embrace the world as it is, without fear of pain or a sense of inadequacy” (“Fratelli Tutti,” No. 78).

The pope’s presence at Lunik is an invitation to see and then judge the current situation from the perspective of the “discarded.”

Speaking at Lunik today, the pope said, “It is not easy to leave prejudice behind, even for Christians. It is not easy to value others, especially if we see them as problems or enemies, if we pass judgments without making any effort to get to know them, and to listen to their stories.”

Active presence among those who have been marginalized is essential, as the Omamas have shown, not only for those in need but for those who extend a helping hand. For it is among the poor, argues Francis, where “we will discover all the goodness that God has planted in human hearts” (No. 78).

Indeed, even as government policies fail and populist politicians continue to exploit the plight of the Roma for their own political gain, grassroots work among Roma women has engendered hope. Women in Roma settlements across Slovakia are gaining agency and bringing about a better future for the next generation. 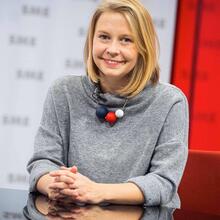 Agata Sustova Drelova is an historian of religion at the Slovak Academy of Sciences.