The key to understanding Pope Francis’ restrictions on the Latin Mass? His belief in inculturation. 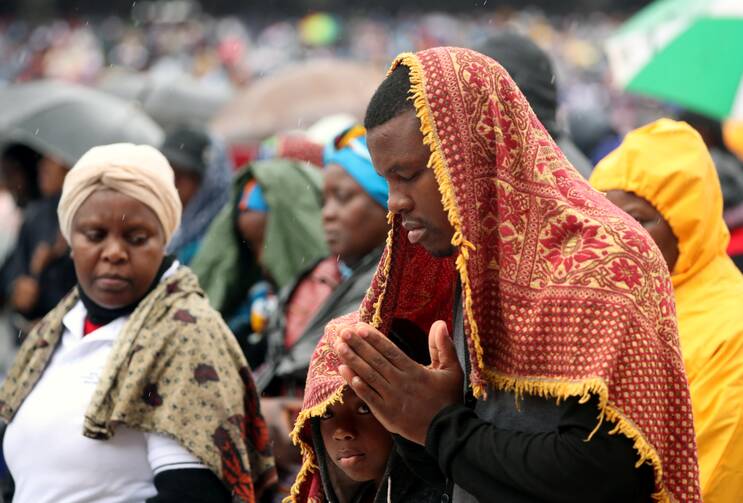 In a video message sent on Aug. 13 to the religious orders of Latin America, Pope Francis touched on a theme dear to his heart: the inseparability of evangelization and inculturation. But he also discreetly offered an insight that may help explain why in July he chose to restrict and regulate the pre-Vatican II liturgy, which has increasingly become an instrument of division within the church.

“Let us not forget that a faith that is not inculturated is not authentic,” Francis told the Latin American Confederation of Religious (C.L.A.R.). He then invited them to enter into the “soul of the peoples,” which, he said, was what gave “true meaning” to culture. To do so, he said, was to value what the Holy Spirit has sown in every person, which is at the same time a gift for all. “Do not forget the binomial: inculturation of faith and evangelization of culture,” he urged.

“Inculturation” is a term that took off in the 1980s, especially in Latin America, to express an insight that developed in the wake of the Second Vatican Council. Although St. Paul VI never used the term, it is implicit in his 1975 apostolic exhortation “Evangelii Nuntiandi,”especially paragraphs 20 and 48, which made clear that the proclamation of the Gospel builds up a culture and regenerates it; it does not quash culture or replace it. And evangelization further involves a kind of discernment of the presence of the Spirit in the beliefs of “the simple and poor,” who were for a long time despised but were now being rediscovered as a repository of the divine.

“Let us not forget that a faith that is not inculturated is not authentic,” Francis told the Latin American Confederation of Religious.

This growth in understanding and respect for culture, and especially popular religiosity, was enabled by, on the one hand, Vatican II’s understanding of the church as both a universal body and a communion of local churches, and, on the other, the liturgical changes—allowing prayers in local languages in which people actively participated—that flowed from this. The Latin American church, notably the thinkers associated with what has come to be known as “the theology of the people” (“teología del pueblo”), were the pioneers of this understanding and their thinking was reflected in the synod that preceded “Evangelii Nuntiandi,” which in turn endorsed that thinking. The Latin American bishops’ meeting in Puebla, Mexico, in 1979 was a decisive moment in liberating this “inculturated” evangelization from both culturally eurocentric preconciliar Catholicism as well as Marxist-influenced sociological categories that permeated early liberation theology.

Down in Argentina, inculturation was promoted especially by the provincial of the Argentine Jesuits, Jorge Mario Bergoglio, S.J., who used to send his students into the barrios for this purpose. He insisted they were going to be taught by, rather than teach, the faithful people of the area and that their capacity for entering into their culture and devotions was the decisive test of their faith. Jesuits promoting justice, he told them, must act in ways rooted in the concrete concerns, as well as the values and devotions, of the faithful, unlike ideologues, who—in a well-worn Bergoglio phrase—were “for the people but never with the people.”

Jesuits promoting justice, Bergoglio told them, must act in ways rooted in the concrete concerns, as well as the values and devotions, of the faithful.

In 1985, then-Father Bergoglio organized and hosted an international conference—the first of its kind in Latin America—in Buenos Aires in which 120 theologians gathered to discuss “the evangelization of culture and the inculturation of the Gospel.”

Twenty years later, Cardinal Bergoglio oversaw the editing of the document that came out of the groundbreaking Aparecida meeting of the Latin American episcopate in May 2007. Its beautiful passages on popular religiosity and culture, unsurpassed to this day, were the contribution, in particular, of the three Argentine drafters and are referenced in many passages of Francis’ 2013 exhortation “Evangelii Gaudium.”

There Francis explains the key insights of an inculturated evangelization as an outworking of the Incarnation itself: “God’s gift becomes flesh in the culture of those who receive it” (No. 115). Christianity has many cultural expressions, reflected in the catholicity of the church (No. 116). And while some cultures are associated with the development of Christianity, “the revealed message is not identified with any of them” (No. 117).

Cultural diversity, he adds, is not a threat to church unity, which is the work of the Holy Spirit; that Spirit reconciles diversity rather than imposes uniformity. Hence the importance of not imposing a particular culture along with the Gospel, for this is to show “more fanaticism than true evangelizing zeal.”

Without inculturation, Pope Francis said, Christian life “ends up in the most bizarre and ridiculous gnostic tendencies.”

It is this “fanaticism” that Francis warned about last week in his address to C.L.A.R. Without inculturation, he said, Christian life “ends up in the most bizarre and ridiculous gnostic tendencies,” in which what matters “is ideology and not the reality of the peoples, and that is not the Gospel.” As an example of this, he pointed to “the misuse of liturgy.”

He did not elaborate, but coming on the heels of his letter to the world’s bishops explaining his reasons for “Traditionis Custodes,” a decision issued on the pope’s initiative that regulates the celebration of the old rite Mass, we can connect some dots. In the letter he regretted how the Roman Missal of 1962 was being used to reject not just the liturgical developments it mandated but Vatican II itself, claiming that the council had betrayed the “true church.” Francis reminds the bishops that this is not just to reject the authority of the council but ultimately the Holy Spirit who guides the church.

That council, Francis recalled to the bishops, insisted on the “full, conscious and active participation of the whole People of God in the liturgy.” Citing the council, he noted that “within the ecclesial communion” there were the particular churches “which enjoy their proper traditions, without prejudice to the primacy of the Chair of Peter who presides over the universal communion of charity, guarantees the legitimate diversity and together ensures that the particular not only does not injure the universal but above all serves it.”

Before the council, the liturgy reflected the ecclesiological culture of that time—highly Roman, centralized and so on, but also real.

That quote, from “Lumen Gentium,” is significant, because it opened the door to what would become, over time, the understanding that evangelization and inculturation were inseparable. “The church is a people of many faces,” Francis says in our book Let Us Dream, “called to be the People of God within a history, in a concrete place, in the language of that place.”

This is what the current weaponization of the Traditional Latin Mass against both Vatican II and papal authority rejects. Francis appears to discern in it a resurgence of the ancient gnostic heresy, which turns Christianity into a discarnate ideology abstracted from the fleshy reality of human culture. Rather than a true spiritual unity forged from diversity, it creates a universal ideology. “The enemy wants diversity to become opposition and so he makes them become ideologies,” the pope warned this year during his homily on Pentecost.

Whether the Mass is in Latin or the vernacular—it’s the same Eucharist that unites the church
Matt Malone, S.J.

Such postures are “bizarre,” the pope says, because they deny that God becomes incarnate in language and culture and “ridiculous” because the attempt to recreate a past tradition is a distinctly postmodern venture. Before the council, the liturgy reflected the ecclesiological culture of that time—highly Roman, centralized, and so on, but real. Nowadays, that same preconciliar liturgy risks being a pastiche, reflecting no culture at all beyond the traditionalist ideology that justifies and promotes it.

Perhaps I am overinterpreting those four small words: “the misuse of the liturgy.” But put against Francis’ long and passionate advocacy of an evangelization inseparable from inculturation, and his recent “Traditionis Custodes,” the link seems as clear as his advice to the men and women religious to avoid being “fearful disciples, enclosed in the past and abandoned to nostalgia.” Francis’ message? “Get out into the holy faithful people of God, respect the holy faithful people of God, evangelize, give witness—and the rest leave to the Holy Spirit.”

Austen Ivereigh is a Fellow in Contemporary Church History at Campion Hall, at the University of Oxford. His latest book is Wounded Shepherd: Pope Francis’s Struggle to Convert the Catholic Church, published by Henry Holt.

@austeni
Show Comments ()
Join the conversation: Login or create an account
Before you can comment, you need to update your profile to include your first and last name, as required in our comments policy. Then reload this page and you'll be set up for commenting. Update your profile