Pope Francis: It’s sad to see men and women religious ‘who have no sense of humor’ 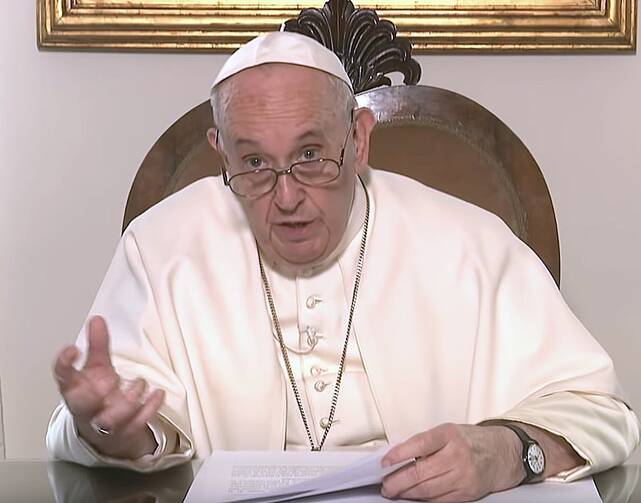 In an Aug. 13, 2021, video message to a virtual conference of religious men and women from Latin America and the Caribbean, Pope Francis urged them to offer a joyful witness to the people they serve. (CNS screenshot/Vatican Media)

VATICAN CITY (CNS) -- Religious men and women must enter into the life of the people they serve, “with respect for their customs, their traditions,” and “try to carry out the mission of inculturating the faith and evangelizing the culture,” Pope Francis told religious from Latin America and the Caribbean.

The pope warned that without inculturation, both Christian and religious life would end up “in the most aberrant and ridiculous gnostic positions.”

“We have seen this, for example, in the misuse of the liturgy,” he said in an Aug. 13 video. “What becomes important is ideology and not the reality of the people, and that is not the Gospel. Do not forget the pairing: inculturate the faith and evangelize the culture.”

The message was broadcasted at the start of a three-day conference sponsored by the Latin American Confederation of Religious, known by the Spanish acronym CLAR. The Aug. 13-15 virtual event reflected on the theme, “Toward an intercongregational, intercultural and itinerant religious life.”

Joy “is the best witness we can offer to God’s holy faithful people, whom we are called to serve and accompany on their pilgrimage toward the encounter with the father,” the pope told them.

The joyful witness of consecrated men and women comes in many forms, especially through a sense of humor, the pope added.

“It is so sad to see consecrated men and women who have no sense of humor, who take everything seriously.”

“It is so sad to see consecrated men and women who have no sense of humor, who take everything seriously,” Pope Francis said. “Please; to be with Jesus is to be joyful, it is also to have the capacity that holiness gives us to have this sense of humor.”

Pope Francis also emphasized the importance of consecrated life as a “promoter of fraternity.”

However, with many congregations facing “the temptation of survival” amid dwindling numbers, the pope urged religious men and women to “renounce the criterion of numbers, the criterion of efficiency” that can turn them into “fearful disciples, locked in the past and abandoned to nostalgia.”

“This nostalgia is basically the siren song of religious life,” he said.