Podcast: Austen Ivereigh on writing a book with Pope Francis (during a pandemic) 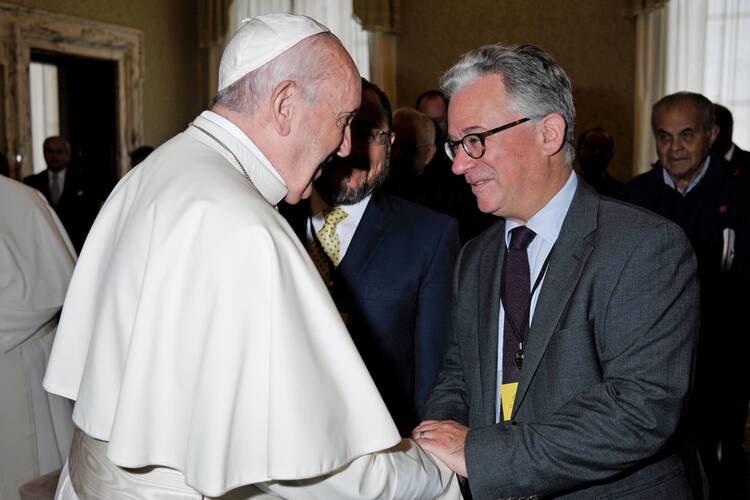 Pope Francis meets author Austen Ivereigh at the Vatican in October 2019. The pope collaborated with Ivereigh on the book, "Let Us Dream: The Path to A Better Future." (CNS photo/Vatican Media)

Pope Francis opens up about his “personal covids”—times of crisis in his life—in a new book called Let Us Dream, written in collaboration with his biographer, Austen Ivereigh.

With Mr. Ivereigh’s encouragement, the pope brought his sometimes-lofty ideas for building a new society post-pandemic down to earth. He discloses in a new way how his lung operation as a young man taught him dependence on others and how his so-called “exile” in Cordoba, Argentina after that country’s “Dirty War” unexpectedly prepared him to become pope.

In this bonus episode of “Inside the Vatican,” host Colleen Dulle and papal biographer Austen Ivereigh discuss Pope Francis’ view of the George Floyd protests, the #MeToo movement and how the work of clerical sexual abuse survivors are an integral part of people reclaiming their dignity.

Mr. Ivereigh and Ms. Dulle discuss the pope’s role as, as Mr. Ivereigh calls him, “the world’s spiritual director,” and how he hopes to apply Jesuit discernment to helping people recover their collective memory and build a new future together.