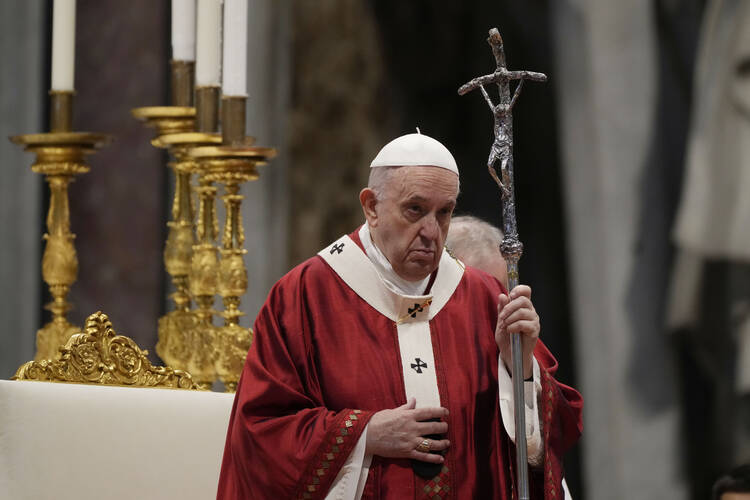 In this Tuesday, June 29, 2021 file photo, Pope Francis celebrates Mass during the Solemnity of Saints Peter and Paul, in St. Peter's Basilica at the Vatican. (AP Photo/Gregorio Borgia, File)

The consolidated financial statement of the Roman Curia for 2020 revealed better-than-expected results even though the overall situation is still quite difficult, the prefect for the Secretariat for the Economy, Juan Antonio Guerrero Alves, S.J., announced July 24 when he released the annual report.

The S.O.E. had prepared a zero-based budget for 2020 that simulated three different financial scenarios—the worst, medium and best case—for what was probably the most critical year for the Holy See and indeed for the whole world because of the crisis caused by the Covid-19 pandemic. The final statement proved to be “slightly better than the best-case scenario” and resulted in a deficit of 68 million euros ($80 million).

The consolidated financial statement of the Roman Curia for 2020 revealed better-than-expected results even though the overall situation is still quite difficult.

The statement revealed that the income for 2020 was only 5 percent lower than that of 2019, which could be considered a positive result given the pandemic, though the full impact of the reduction in income may not be seen until 2021.

The sources of this income are threefold.

First, funds generated in the Holy See from rents, investments, visitors (to museums, catacombs, etc.) and services accounted for 58 percent of the income in 2020, compared with 68 percent in 2019.

The statement revealed that the income for 2020 was only 5 percent lower than that of 2019, which could be considered a positive result given the pandemic.

Third, contributions from entities linked to the Holy See (mainly the Institute for the Works of Religion, commonly known as the I.O.R. or Vatican Bank, and the Governorate of the State of Vatican City) accounted for 19 percent of the income in 2020 compared to 14 percent in 2019.

Sixty-five percent of the total income is dedicated to supporting the Holy See’s mission.

The consolidated financial statement shows that the contribution from Peter’s Pence to the mission of the Holy See was 50 million euros in 2020, less than in any of the previous three years. It counted for 32 percent of the cost of the mission in 2019 and only 24 percent in 2020. A further 12 million euros from Peter’s Pence was given to specific projects in countries in need.

Since the Peter’s Pence collection in 2020 amounted to a total of 44 million euros, the Vatican had to draw from the reserve patrimony of that fund to cover the 50 million euro contribution.

It is noteworthy that none of Peter’s Pence was used for administration or asset management in 2020, a practice that has been criticized in the past.

There has been a significant 40 percent reduction in the contributions received from the Peter’s Pence collections in churches worldwide between 2015 and 2020.

Although the consolidated financial statement does not show it, America has learned from the S.O.E. that there has been a significant 40 percent reduction in the contributions received from the Peter’s Pence collections in churches worldwide between 2015 and 2020, but the United States and Germany are still the biggest contributors.

The statement reveals that there was an income loss of 11.6 million euros because the pandemic forced the closure of the Vatican museums, the catacombs and the Vatican travel office in 2020 due to the Covid-19 pandemic. That loss was offset to an extent by a reduction in expenses of almost five million euros for operating those same activities, so the total net loss amounted to 6.7 million euros.

The 2020 statement showed that the return from the Vatican’s financial investments was lower than that of 2019 by 32.1 million euros, but this appears to be due especially to the fluctuation in the rates of exchange and the depreciation of the market value of the stock. Much of the investment is in dollars, though that could change in the coming years.

One significant item not shown in previous consolidated financial statements is the posting under “receivables” of 83.5 million euros more than last year. The statement explains that this “is mainly due to a loan agreement between APSA (Administration of the Patrimony of the Apostolic See) and the Secretariat of State to refinance with much better conditions the investment in the 60 Sloane Avenue property in London.”

America learned from the S.O.E. that the Vatican had been paying for a mortgage of 127 million euros on that property at the exorbitant interest rate of 7.7 percent, but thanks to the refinancing it now pays a 0.71 percent rate of interest.

Father Guerrero confirmed the breaking news that the Vatican has now put up for sale the London property that cost it so much money but far more in terms of image.

Father Guerrero confirmed the breaking news that the Vatican has now put up for sale the London property that cost it so much money but far more in terms of image. A trial opens in the Vatican on July 27 to judge the misdeeds related to the purchase of that property, and for the first time in modern history a cardinal, Giovanni Angelo Becciu, is among the 10 on trial. It was the Vatican’s own internal controls—at the I.O.R. and in the general auditor’s office—that first uncovered the alleged financial crimes, including embezzlement, and reported them to the judicial authorities.

Scope of the Statement

In a wide-ranging interview with Vatican News, Father Guerrero emphasized that the 2020 consolidated financial statement is only that of the Roman Curia and not of the Vatican as such because it does not include the Governorate of the Vatican City State, the Institute for the Works of Religion or the many institutes linked to the Holy See, including hospitals, foundations, the pension fund, the health services fund and so on. The S.O.E. is working to ensure that all these can be included in the consolidated financial statement for 2021. This is a work in progress and one of great importance.

Why the deficit is less than expected

One of the main reasons why the deficit was better than anticipated in 2020 is to be found in the reduction of expenses by 26 million euros. This was the result of decisions taken in preparing the 2020 zero-based budget, Father Guerrero said. This involved “maintaining only what was essential: salaries, aid to the churches in difficulty and assistance to the poor,” he said. It involved cutting travel and events such as congresses or meetings, the hiring of consultants and the postponement of many works of maintenance. For example, the Holy See’s 26 nunciatures (embassies) worldwide reduced their expenses by 19 percent compared to the previous year. Costs for papal travel were also greatly reduced in 2020 because of the pandemic.

Speaking of the deficit, Father Guerrero emphasized that “the entities of the Holy See do not have making profit as their goal.”

Speaking of the deficit, Father Guerrero emphasized that “the entities of the Holy See do not have making profit as their goal. Many tend to show a loss because the services they provide are not completely financed.” At the same time, he said, an important effort is being made “to improve the sustainability of these entities.”

“The only item of expenditure that did not decrease in 2020 was the taxes paid by the Holy See to the Italian state and the municipality of Rome, and this was almost the same as the previous year: 18.8 million euros),” Father Guerrero told Vatican News.

At the same time, the financial statement shows that one item in the deficit is the provision of aid to churches in difficulty (around 10 million euros), where the need was especially acute during the pandemic. This aid was provided by the dicastery for human development, the Congregation for the Oriental Churches and the office of the papal almoner.

Today’s statement confirms the work that is being done by the S.O.E. under Father Guerrero to ensure greater transparency, accountability and professional management to the Vatican’s finances—an area that has long been plagued by scandal.

Note: For the first time, in a further act of transparency, the Vatican’s office for the Administration of the Patrimony of the Apostolic See has published its balance sheet that reveals, among other things, the size of the real estate owned by the Holy See and how and where it makes investments.