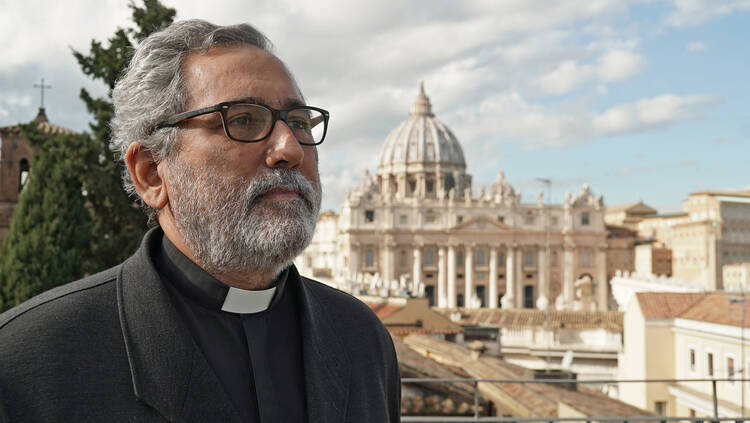 Jesuit Father Juan Antonio Guerrero, prefect of the Vatican Secretariat for the Economy, is pictured in an undated photo. (CNS photo/courtesy Society of Jesus)

Like all other states across the globe today, the Vatican, the world’s smallest state, is in financial difficulty as the Covid-19 pandemic continues to strike not only the lives of people but the global economy.

The Holy See, the central government of the Catholic Church, is in crisis mode as it struggles to find ways to balance its budget in these turbulent times, as Juan Antonio Guerrero Alves, S.J., the new head of the Vatican’s Dicastery for Finances, explained in an interview published on Vatican Media today.

Denying media reports to the contrary, he said, “The Vatican is not at risk of default.” At the same time, he said, “We certainly have difficult years ahead. The church carries out its mission with the help of the offerings of the faithful, and we do not know how much the people can give.”

Last week, Father Guerrero, who took over as head of the dicastery in November, outlined a grim scenario at a summit meeting with Pope Francis and the heads of the Roman Curia offices, where he presented a 10-page document entitled, “Holy See: economic situation and future prospects at the time of Covid-19.”

The Holy See, the central government of the Catholic Church, is in crisis mode as it struggles to find ways to balance its budget in these turbulent times.

“It is certain that there will be a contraction in income,” he said in the document, “but it cannot [at this stage] be quantified with precision. Right now, it is only possible to work at the reduction of administrative costs.”

Before presenting the budget, Father Guerrero and Cardinal Reinhard Marx, the president of the Council for the Economy, sent a letter to the heads of all Vatican offices on April 7, asking them to drastically cut costs in their respective offices and revise their budgets for 2020. It called to radically reduce all travel this year, cancel all conferences, meetings, ad limina visits, radically limit contracts for consultancy and overtime and postpone until next year all work that is not absolutely necessary.

The document, which America has seen, anticipates that the Holy See, like every other state, will be hard hit by the Covid-19 pandemic. But unlike other states, the Holy See does not maintain a market economy nor a tax system to regulate. Both the text and Father Guerrero in the Vatican Media interview explain that “the mission of the Holy See” is supported by five principal sources of income:

Father Guerrero explained that the priority of the Holy See’s budget is to enable it to continue its “mission,” which includes to pay the salaries of the employees and provide assistance in a tangible way to those in difficulty—both struggling churches in other countries and the poor.

“There will be no cutting of funds to those most in need. We do not live to save the budget,” he said. “We trust in the generosity of the faithful, but we have to show to those who give part of their savings that their money is well spent.”

The budget analysis anticipates that the Holy See, like every other state, will be hard hit by the Covid-19 pandemic.

Father Guerrero sought to put the Vatican Budget in perspective. “We are not a business enterprise. We are not a company. Our goal is not to make profit,” he said. “Each [Vatican] dicastery, each entity, provides a service, and every service has a cost. Our commitment is to do that with the maximum sobriety and the maximum clarity. Our budget is a mission budget. The balance sheets connect the figures to the mission of the Holy See,” he added.

He pointed out that the Holy See’s budget pales when compared to some U.S. universities. Sources say he was alluding to comparisons with the budgets and endowments of Boston College or the University of Notre Dame, not to mention Harvard or Columbia. “This is a truth that is often ignored,” he remarked.

The Vatican today employs around 5,000 persons; 2,600 of them are employed in the Roman Curia, of whom 952 are clerics; the rest are lay people. Some 2,000 people (over 90 percent are members of the laity) work for the Vatican City State, including around 1,000 in the Vatican Museums.

Father Guerrero told the Vatican summit that it is not yet possible to present a consolidated balance sheet for 2019 due to the slowdown in the administration due to the pandemic, but he presented the consolidated balance sheets for the years 2016 to 2018, which throw light on the regular income, outlays and deficits of the Holy See. He explained to Vatican Media that these show that 45 percent of the outlay is related to salaries and personnel costs, while another 45 percent goes to administrative and general expenses and 7.5 percent to donations given by the Holy See.

He said the deficit for those years oscillated between 60 and 70 million euros. He denied media reports that the deficit was due to “bad administration” and emphasized that “behind these figures is the mission of the Holy See and the Holy Father.”

He said, “It’s not right to say that the deficit is financed by Peter’s Pence,” explaining that Peter’s Pence “is a donation of the faithful that finances the Mission of the Holy See, which includes the pope’s charity, and is not enough for all this.”

A committee will soon be established of “persons of the highest level, without conflict of interests” to assist the Holy See in overseeing all investments.

The document he presented at the Vatican summit was based on an approved budget for 2020 that showed an income of 269 million euros ($292 million), outlays of 322 million euros ($349 million) and a deficit of 53 million euros ($58 million). But aware that the world economic situation is in great flux, his presentation offered three possible best- to worst-case scenarios for the Holy See’s 2020 budget.

The best-case scenario is based on effective containment of administrative costs and a reduction of income of between 30 and 50 percent. This envisages a 2020 budget with an income of 201 million euros ($218 million), outlays of 269 million ($292 million) and a total deficit of 68 million ($74 million). That is a deficit of 15 million euros ($16.3 million) more than the approved budget or a 28 percent deficit.

The medium scenario is calculated on a reduction of income of around 50 to 60 percent and a partial containment of expenses, with a salary correction of 3 percent. This envisages a 2020 budget with an income of 180 million euros ($196 million), outlays of 277 million ($301 million) and a deficit of 97 million euros ($105 million). That is 44 million euros ($48 million) more than the approved budget or an 83 percent deficit.

The worst-case scenario is based on a particularly slow economic recovery, a drastic reduction of income of between 50 and 80 percent and ineffective control of expenditures. This would result in a 2020 budget having an income of 149 million euros ($162 million), outlays of 295 million ($320 million) and a deficit of 146 million euros ($156 million). That is 93 million euros ($101 million) more than the approved budget—a deficit of 175 percent.

To ensure there is no cash flow problem, the document asked that all liquid funds held by the different Vatican entities be transferred to the Administration of the Patrimony of the Apostolic See, the office that administers the patrimony of the Holy See and pays the salaries of personnel and the expenses of the Vatican offices. There will also be a centralization of all funds for investment.

Father Guerrero explained that these three scenarios are “hypothetical” and will be updated as soon as the dicastery gets new data.

In the document presented to the summit and in his interview with Vatican Media, Father Guerrero announced that a governing code for the purchase of goods and the assignment of contracts will soon be introduced, in accord with the best international and ethical standards, to ensure efficiency and savings. He also announced that a committee will soon be established of “persons of the highest level, without conflict of interests” to assist the Holy See in overseeing all investments. He admitted that in the past “we have trusted persons who were not worthy of trust,” but he promised to put in place transparency measures meant to prevent such mistakes in future.

In the budget document, Father Guerrero announced that different Vatican offices have been asked to prepare an austerity budget “from base zero” for 2021, in other words not taking into account what has happened in the past but starting only from what is essential.

Updated on May 20 with a clarification to a reported comment.