It’s okay to be upset by the Bishops-Biden controversy—but please, don’t leave the church over it. 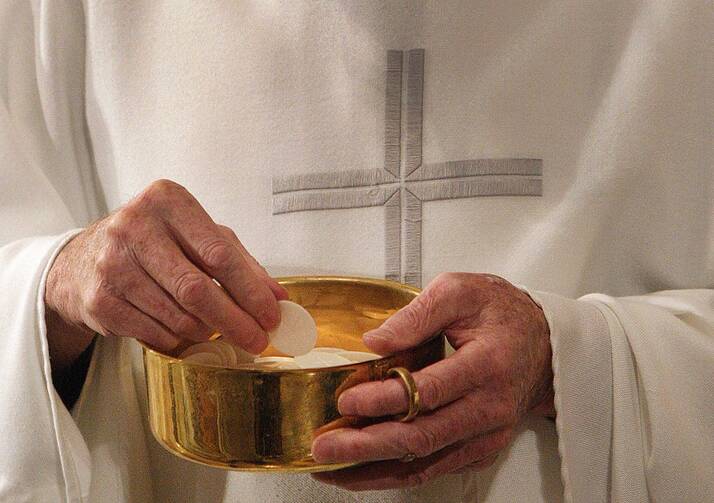 A priest prepares to distribute Communion during Mass in Washington. (CNS photo/Bob Roller)

This conversation is an edited transcript from the most recent episode of Jesuitical.

Ashley McKinless:
So what have the reactions been to this vote, Zac?

Zac Davis:
I think people are really upset. That’s what I’ve heard from people that listen to this show. I’ve also been talking with priests I know who really feel like there’s a fallout that they have to deal with, [who feel] left hanging high and dry on how to explain and talk about this. One pastor I know told me that longtime parishioners are leaving, leaving the church finally over this. And people have definitely expressed similar sentiments in the Facebook group. But people are very, very upset.

ZD:
Before saying a little bit more about that, I just kind of want to nuance this conversation a little bit. And, in the spirit of charity, offer a few benefits of the doubt here because I think that’s important to do as young Catholics. We should try and read the best intentions into this.

"Where is the voice of God calling you? ... If you’re thinking about leaving, let me just say, I hope you stay."

Communion is important, right? So it’s not necessarily bad to have discussions like this, especially about people in power. You saw a little bit of this when President Trump was still in the presidency, particularly around the treatment of refugees and migrants at the border. At least one bishop brought up imposing canonical penalties on people that cooperated with that, but [that proposal] did not go anywhere. Especially because the church, in its history, has let a lot of people and regimes really abuse their presence in church and with the church to commit really horrible atrocities. Now, that’s a separate question of whether we should be doing this to President Biden right now.

AM:
Just to kind of echo that, I would invite people, just because we are all tempted to let our political leanings reflect the way we see the church, [to consider this]. Would you have, if Trump was Catholic, cheered or been upset by bishops talking about whether he should be denied Communion, given his manifest disregard for human dignity? So I just would urge trying to think about this consistently and not put partisan feelings ahead of what you actually believe about denying the Eucharist to people.

ZD:
Now to be perfectly candid, this has been a disaster.

"My general reaction to this has not been anger but sadness, because it just shows a church that still hasn’t figured out how to talk to its flock in a credible way."

ZD:
I think a lot of people see our second Catholic president, who at least aligns with the church on a number of things, but who also definitely disagrees with it in this area of huge importance, and feel very frustrated that after this past year, where everyone had the worst year of their life, that people are emerging and it looks like the church didn’t even notice. The church has not even noticed what we’re going through, what we’ve gone through and, as you said, Ashley, we just spent the last year and a half without the Eucharist. We all watched the TV Mass. We all said this Act of Spiritual Communion. We know what it’s like to not have it.

And they see that being used as sort of a political discussion, see it brought into this realm of hyper-partisanship that is plaguing this country, [even though] this doesn’t seem to be an issue anywhere else in the world. President Biden was just at the G7 summit with a number of Catholic world leaders. And you don’t really see any of their bishops’ conferences having conversations about whether or not to deny them Communion. And so I think people feel like the church is fighting the same culture war that it has been fighting for 20 years. And it comes at a time when we’re just coming out of the resurgence of the sex abuse crisis (which really hurt the church’s authority to speak on moral issues), we’re coming out of this pandemic, and yet we’re still talking about this.

AM:
I get that anger and frustration. A couple of things I would say, not in rebuttal, but just as things to always keep in mind. There’s no such thing as “the bishops.” Yes, there were some bishops that were engaging in this hyper-partisanship and calling out Biden by name. There are a lot of other bishops who seemed genuinely distressed about the situation in the United States where they see how we’ve been talking about the new evangelization for years and it is has had zero effect on the amount of people feeling like they need to come to Mass, or feeling like the Eucharist should be the source and summit of their faith. And so I do believe that they are genuinely concerned about that, or at least some of them are, and that whatever the origins of this document are, many of them are coming to it with good faith. And some of the bishops would agree that the timing is off and we shouldn’t even be talking about this. So I would just nuance it a little bit in that way.

"That Eucharist is not the bishops’ Eucharist. It’s the church’s. It belongs to the church, which is all of us."

I’m generally kind of an unflappable person. And so my general reaction to this has not been anger but sadness, because it just shows a church that still hasn’t figured out how to talk to its flock in a credible way. Like you said, they’re relying on the same issues that they’ve gone to in the past and they still haven’t figured out public relations in any way. The fact that they couldn’t see this coming is pathetic. [I say this] not in a mean way, but like, I actually feel bad for them because they’ve seemed like they’re just floundering.

They put out a Q&A after this vote responding to common questions that should have been addressed before the vote, like, “why are they doing this now?” or, “Does this ban Communion for politicians?” And was no, but that has been the headline. This seems less malicious and more just like incompetent floundering to me. And I don’t know, I guess I haven’t come to expect anything different from the bishops at a national level, just because that’s not where my faith is grounded in any way.

ZD:
I think we want to end this discussion with just a little, if we could, challenge to look at the hope here. Especially if you are someone who is really distressed by this and someone who may be hanging on to the church by a thread and you’re thinking about finally letting go and leaving. First of all, your feelings are valid. In no way am I, are we, trying to say that they’re not. But the biggest thing you could do in response to this is go receive the Eucharist. Go, go chew on Jesus’ flesh and think, and pray about this and ask what’s going on. That Eucharist is not the bishops’ Eucharist. It’s the church’s. It belongs to the church, which is all of us.

[I’ve also been thinking about how], for most of the church’s history, lay people like you and me, Ashley, would have never known what was coming out of a bishops’ meeting, and people just have generally had to do the work of receiving the sacraments and doing the works of charity. And I would hope that, as you’re looking at this news, you’re doing your own sort of interior survey of what’s going on inside you. And that just be aware of the temptation to despair, because that is not where the voice of God is. Where is the voice of God calling you? And I hope if you’re thinking about leaving, let me just say, I hope you stay.