Why do white Catholics have such a high vaccination rate? Is it faith or education? 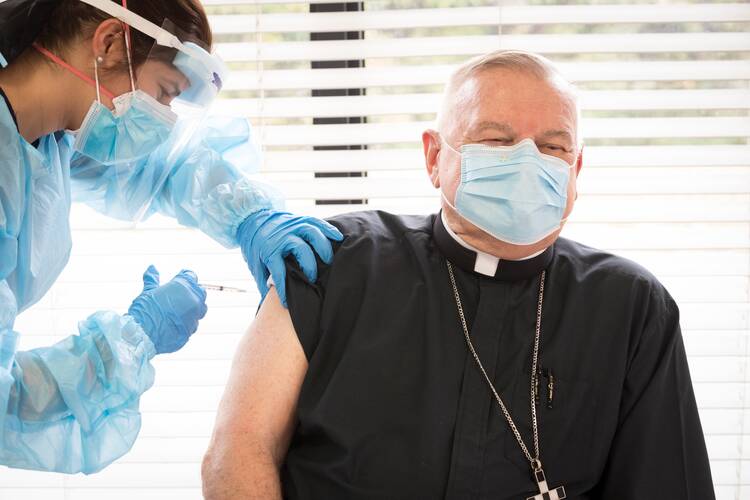 About two-thirds of white U.S. Catholics have received a Covid vaccine or plan to get one as soon as possible, according to a poll released on April 22 by PRRI and the Interfaith Youth Core. That was a higher rate than PRRI found for any religious group other than Jews, and there seemed to be no significant difference between white Catholics who attend religious services and those who do not. But it is unclear whether the high vaccination rate is a matter of faith—Pope Francis has urged Catholics worldwide to get vaccinated against Covid—or of demographics.

But attitudes toward the Covid vaccine may be more sharply divided by educational background than by religious belief. Among those with four-year college degrees, 70 percent plan to get the vaccines, compared with 45 percent among those whose education has not gone beyond high school. It is worth noting that, according to a 2016 survey by PRRI, white Catholics are more highly educated than most other religious groups (39 percent said they were college graduates, compared with 25 percent of white evangelical Protestants and 12 percent of Hispanic Catholics).

About two-thirds of white U.S. Catholics have received a Covid vaccine or plan to get one as soon as possible—a higher rate than any religious group other than Jews.

In an attempt to more closely examine the link between vaccine acceptance and religious belief, PRRI also asked respondents whether getting vaccinated was “a way to live out the religious principle of loving my neighbors.” The Catholic Health Association, in fact, is using the phrase #LoveThyNeighbor as part of a campaign to encourage vaccination.

But in the PRRI poll, white Catholics were not especially likely to cite love of neighbor as a reason for getting vaccinated. Only 57 percent of white Catholics agreed with the PRRI statement, not much different than the 55 percent among Hispanic Catholics or 55 percent among white mainline Protestants. Even among Americans with no religious affiliation at all, 53 percent said vaccination was a way to honor that “religious principle” of loving one’s neighbor.

It is unclear whether the high vaccination rate is a matter of faith—Pope Francis has urged Catholics worldwide to get vaccinated against Covid—or of demographics.

PRRI also found that 56 percent of all Americans favor allowing individuals who would otherwise be required to receive a Covid-19 vaccine to refuse doing so on the basis of their religious beliefs. That percentage rose to 81 percent among white evangelical Protestants but was only 55 percent among white Catholics and an even lower 45 percent among Hispanic Catholics—the latter figure perhaps reflecting the fact that Covid cases and deaths are higher among Hispanics than among any other major racial/ethnic group in the United States.

Correction: An earlier version of this story omitted the Interfaith Youth Core as a co-sponsor of the poll with PRRI.

[Read this next: ‘Pray for the people of India’: a country suffering ‘unimaginable’ Covid-19 outbreak]