Where else will Pope Francis travel in 2021? 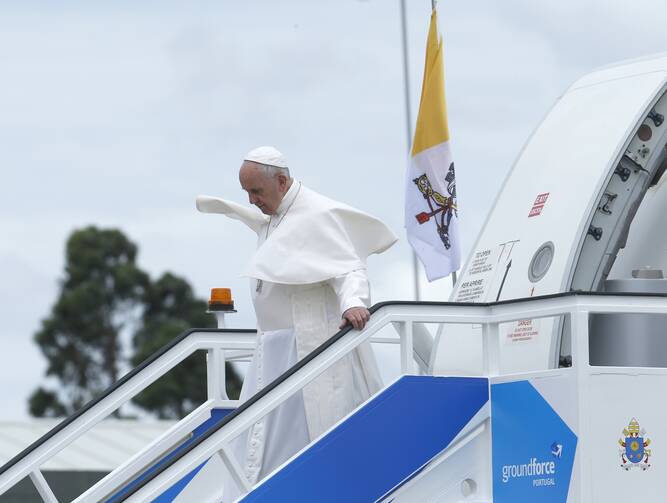 Pope Francis is planning to travel abroad again in the second half of this year, starting with visits to Hungary and Slovakia in September. He also hopes to visit Greece and Cyprus in November and may even go to Glasgow that same month for the international meeting on climate change, known as COP26. All of this, of course, depends on the coronavirus pandemic being under adequate control.

On Feb. 8 of this year, he explained the purpose of these foreign visits when he addressed ambassadors from the 183 countries that have diplomatic relations with the Holy See. “These visits are an important sign of the solicitude of the Successor of Peter for God’s people spread throughout the world and the dialogue of the Holy See with states,” the pope said. “They also frequently provide an opportunity to promote, in a spirit of sharing and dialogue, good relations between the different religions.”

Francis has already made 33 foreign trips and visited 52 countries since his election as pope on March 13, 2013. He is the second-most-traveled pope in history after St. John Paul II.

The first Jesuit pope is expected to begin his travels in the fall with a visit to Budapest, the capital of Hungary, for the closing Mass of the International Eucharistic Congress in the city’s Heroes Square, on Sept. 12. He confirmed this at a press conference on the plane returning from Iraq on March 8, but clarified the Mass would be the only stop on this brief trip. At the same time, he indicated that he might also visit nearby Slovakia. “Budapest is a two-hour drive from Bratislava,” he said. “Why not make a visit to Slovakia?”

The Hungarian bishops’ conference responded with joy at the news and in a statement that same day said, “We are pleased to learn that the Holy Father has announced his decision to come to Budapest for the closing Mass of the 52nd International Eucharistic Congress.”

“We hope that his visit will be a great encouragement and spiritual reinforcement for all of us and for the future participants of the Eucharistic Congress,” Cardinal Peter Erdo, archbishop of Esztergom-Budapest and primate of Hungary, and Bishop Andras Veres of Gyor, the president of the conference, said in the statement.

The event was originally scheduled for 2020 but had to be postponed due to the coronavirus pandemic. But, even now, it seems that bishops from many countries will not be able to attend because of pandemic restrictions.

The Jesuit pope is expected to begin his travels in the fall with a visit to Budapest, the capital of Hungary, for the closing Mass of the International Eucharistic Congress on Sept. 12.

Many people in Hungary, a landlocked country of 10 million people of whom more than 50 percent are Catholic, would like the pope to remain more than one day, but it is not clear if that will happen. One reason seems to be that Prime Minister Viktor Orbán’s anti-immigration policies and “rule by decree” that threatens to undermine democracy have sparked much controversy in the European Union and concern in Rome, too.

Pope Francis linked his visit to Hungary to a trip to neighboring Slovakia, but it is not yet clear to which he will go first. Slovakia, another landlocked country, is a stable democracy in central Europe with a population of 5.5 million, bordered by Poland, Ukraine, Hungary, Austria and the Czech Republic, from which it separated in 1993.

Its president, Zuzana Caputova, a lawyer and anti-corruption campaigner, told the local TASR news agency in March: “I am very pleased that we will be able to welcome the Holy Father in Slovakia.” She had visited Francis at the Vatican last December and invited him to visit her homeland. “His visit will be a symbol of hope, which we so desperately need,” she said. St. John Paul II visited Slovakia three times; his last visit was in September 2003.

The Vatican has yet to confirm the visits to both countries; the confirmation normally comes about three months ahead of the trip.

In addition to these visits, sources in Rome told America that the 84-year-old pope also hopes to travel to Greece and Cyprus in November, but again there is no official confirmation from the Vatican.

Sources in Rome told America that the 84-year-old pope also hopes to travel to Greece and Cyprus in November, but again there is no official confirmation from the Vatican.

Francis went to the Greek island of Lesbos on April 16, 2016, to visit the Mòria refugee camp. Twelve Syrian refugees, all of them Muslims, flew back with him to settle in Rome, a gesture that made an enormous impact internationally and especially in the Muslim world. He was joined on the visit by the Ecumenical Patriarch Bartholomew I and the primate of Greece, Archbishop Ieronymous II. He told the world then, “We have come to call the attention of the world to this grave humanitarian crisis and to plead for its resolution.”

In an emotional scene amid 2,500 refugees, the pope said: “I have wanted to be with you today. I want to tell you that you are not alone.”

He may well want to visit that camp or other camps on the island, as well as Athens, the capital city. In 2020, a fire broke out in the Moria camp, leaving nearly 13,000 migrants without shelter.

He is expected to travel from Greece to the divided eastern Mediterranean island of Cyprus, which he had planned to visit in 2020. The island has been partitioned since 1974 following the invasion of Turkish forces, and there is a U.N.-guarded buffer zone between the two parts of the island. The northern part (about 36 percent of the territory) is inhabited by Turkish Cypriots and, according to international law, is illegally occupied by Turkish forces; the other part is inhabited by Greek Cypriots.

The Cypriot president Nicos Anastasiades visited Francis in the Vatican in November 2019 and afterward announced the pope’s visit, which, he said, would coincide with the 60th anniversary of the republic (when it gained independence from Britain) and the 10th anniversary of Pope Benedict XVI’s visit to the island in 2010. Cyprus was the first stop on St. Paul’s missionary journeys to spread Christianity in the first century A.D., and he converted the Roman governor of the island, Sergius Paulus, to the faith. Today, most Christians in Cyprus are Greek Orthodox.

Apart from visits to those four countries, Vatican sources told America that “it is possible” Pope Francis may also travel to Glasgow, Scotland, if invited, for the COP26 climate change conference hosted by the United Kingdom and Italy. The heads of state or government from many countries that are party to the Paris climate accord are expected to attend, including the leaders of the United States, China, Germany, France and Russia.

From the beginning of his pontificate, Francis has emphasized the urgent need to address climate change and care for planet earth. In June 2015, he released “Laudato Si’,” an encyclical “on care for our common home,” just months before the Paris climate summit (COP21). The document is said to have helped build support for the climate agreement that was approved at that summit. Last week, the pope also gave a brief video message of encouragement at the Leaders Summit on Climate organized by President Joseph Biden on April 22.

Vatican sources told America that “it is possible” Pope Francis may also travel to Glasgow, Scotland, if invited, for the COP26 climate change conference.

On the plane returning from Iraq on March 8, Francis told journalists that he would like to visit Lebanon as soon as the conditions permit. He repeated his wish on April 22 when he met Saad Hariri, the country’s prime minister designate, in a private audience at the Vatican. Afterward, Mr. Hariri, who has been struggling to form a government for six months, told reporters that he read the pope’s words as “a message to all Lebanese and all parties that we have to hurry up in the formation of a government.”

It remains to be seen if that visit can take place this year.

In addition to the aforementioned trips, Francis has several times stated his desire to visit South Sudan with Archbishop Justin Welby of Canterbury as soon as the nation’s peace process is consolidated. But this is unlikely to be happen in 2021 because of what the U.N. Office for the Coordination of Humanitarian Aid describes as “the dire situation in the country,” aggravated by “the lack of a durable peace” and “the coronavirus pandemic,” that have left two-thirds of the population and some 300,000 refugees and asylum seekers in need of some form of humanitarian assistance and protection.