Pope Francis meets with refugees in camp and tells them: You are not alone. 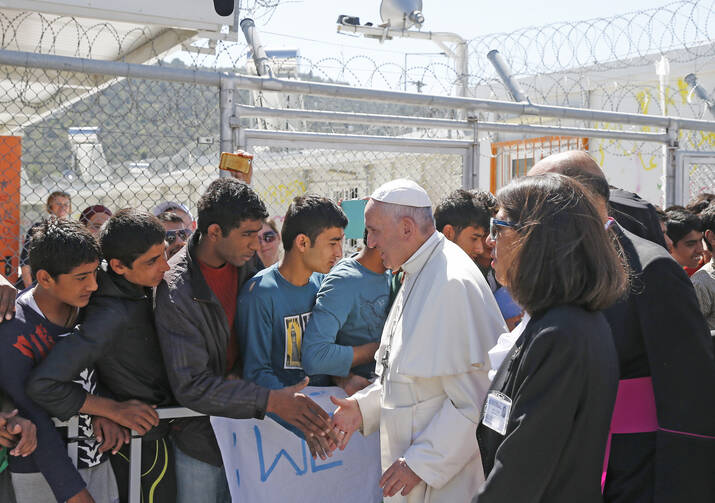 “I have wanted to be with you today. I want to tell you that you are not alone,” Pope Francis told refugees—men, women and children—when he spoke to them amid highly emotional scenes at a Moria refugee camp, which is home to 2,500 of them on the Greek island of Lesbos, on Saturday, April 16.

“We have come to call the attention of the world to this grave humanitarian crisis and to plead for its resolution,” he said referring to the fact that he had come with the Ecumenical Patriarch Bartholomew, and the Primate of Greece, Archbishop Ieronymous II.

“As people of faith, we wish to join our voices to speak out on your behalf,” Francis told the refugees in the camp.

Accompanied by the Orthodox leaders, Francis greeted 150 young refugees along the barricades inside the camp, then another 250 of them gathered in a tent, and then many more who called out to him. Amid scenes of great emotion, Francis face alternated between expressions of intense joy as he shook young hands or bowed to veiled Muslim women, and immense pain and sadness as he listened to their sad stories, often expressed with emotion, cries and tears.

Several young children gave him beautiful drawings depicting their experiences and he promised to show some of these later at the press conference on the plane returning to Rome.

In the tent, some Pakistanis raised a placard saying “Pakistani Christians welcome the Pope.” At another point a young man with Asiatic features broke down with emotion and on his knees pleaded with the pope, “Father, please bless me!” Kurdish Christians as well as Muslims kissed his hand.

Young children held up signs appealing to the pope and the other religious leaders, “Please help the Ezedi people from genocide.” Muslim women with children pleaded with the pope to help them, pointing to their children.

As the pope, patriarch and archbishop prepared to address the refugees, hundreds of refugees chanted “Freedom, freedom, freedom.”

He had driven in a white minibus to the camp in the hills, four miles from the port city of Mytilene, together with the Ecumenical Patriarch Bartholomew I and the Archbishop Ieronymous II, in an unprecedented ecumenical gesture of solidarity with the 60,000 refugees in 40 camps across Greece, and vast number of others across Europe or waiting to reach the continent.

“As people of faith, we wish to join our voices to speak out on your behalf,” he told the refugees.

“We hope that the world will heed these scenes of tragic and indeed desperate need, and respond in a way worthy of our common humanity,” he added.

He recalled how in these past weeks and months “you have endured much suffering in your search for a better life” and “many of you felt forced to flee situations of conflict and persecution for the sake, above all, of your children, your little ones.”

He told them, “You have made great sacrifices for your families. You know the pain of having left behind everything that is dear to you and—what is perhaps most difficult—not knowing what the future will bring.”

He recalled that “many others like you are also in camps or towns, waiting, hoping to build a new life on this continent.”

He left them with one message: “Do not lose hope!”  And he called on “all our brothers and sisters on this continent, like the Good Samaritan, to come to your aid in the spirit of fraternity, solidarity and respect for human dignity that has distinguished its long history.”

Patriarch Bartholomew and Archbishop Ieronymous also delivered moving speeches in a similar vein, and then all three of them had lunch with eight refugees in a container which is their typical home in this camp.