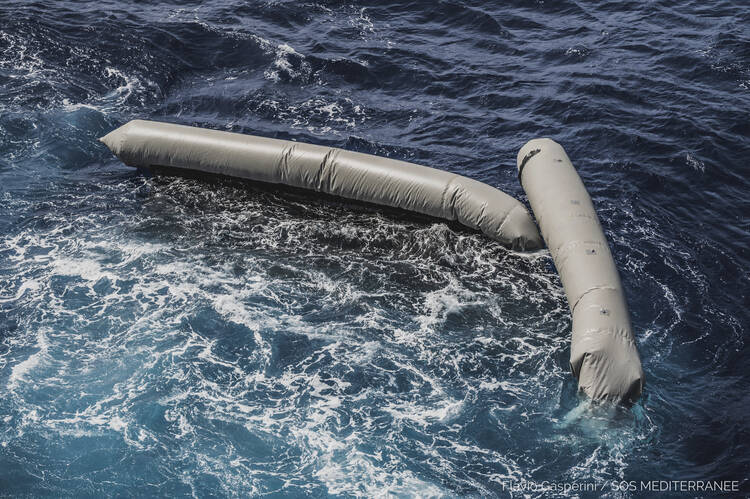 Debris from a dinghy which was supposedly carrying over 100 migrants are seen floating in the Mediterranean Sea northeast of the Libyan capital, Tripoli, Thursday, April 22, 2021. SOS Mediterranee, which operates the rescue vessel Ocean Viking, said late Thursday that the wreck of a rubber boat, which was initially carrying around 130 people, was spotted in the Mediterranean Sea. The aid vessel did not find any survivors, but could see at least ten bodies near the wreck, the group added in a statement. (Flavio Gasperini/SOS Mediterranee via AP)

VATICAN CITY (CNS) — In the wake of a deadly fire in a Baghdad hospital treating COVID-19 patients and more migrant deaths in the Mediterranean Sea, Pope Francis prayed for the victims of the disasters and their families.

After reciting the “Regina Coeli” prayer with visitors in St. Peter’s Square April 25, the pope urged those gathered there to join him in prayer.

“I confess I am extremely sad over the tragedy that has once again taken place in the Mediterranean,” he said, referring to reports that all of the estimated 130 people on board a rubber dinghy drowned in rough waters.

European Union border protection agents alerted Italian, Maltese and Libyan government authorities of a vessel in distress April 21, but it was up to nonprofit rescue groups and three merchant vessels to conduct an active search, ending in finding no survivors April 22.

Pope Francis lamented not just the loss of life, but the lack of immediate rescue by government authorities.

“They are people. They are human beings who begged for help in vain for two whole days—help that never arrived,” he said.

“Brothers and sisters, let us all ask ourselves about this umpteenth tragedy. It is a shameful moment.”

“Let us also pray for those who can help but prefer to look the other way. Let us pray in silence for them,” the pope added.

The pope also expressed his closeness and prayers for victims of a fire in a hospital for COVID-19 patients in Baghdad.

Some 82 people died and more than 110 were injured by the blaze, which erupted late April 24 and was suspected of being caused by improperly stored oxygen canisters.

With Iraq now facing a second wave of infection, the hospital housed patients affected by the coronavirus.

Cardinal Louis Sako, the Baghdad-based Chaldean Catholic patriarch, visited the hospital April 25 and prayed for those who died or were injured and their families.

“Let us also pray for those who can help but prefer to look the other way. Let us pray in silence for them,” the pope added.

In a note published on the patriarchate’s website and translated by AsiaNews, the cardinal called it a “humanitarian and national disaster” which requires “unity and solidarity” in order to “avert such shameful disasters in the future.”

Iraqi Prime Minister Mustafa al-Kadhimi suspended the minister of health from his duties as an investigation was underway. The leader also announced three days of national mourning and promised financial compensation for the families of each victim.

Cardinal Sako said in his note that the church would continue to support all efforts by government, security and health officials as well as their fellow citizens “to build together peace, stability and closeness and to provide services, especially in these turbulent conditions in a region that also experiences many conflicts.”

The cardinal said it was urgent the country find ways to overcome the many recurring crises afflicting the country.