Pope Francis on Easter: ‘The risen Christ is hope for all who continue to suffer.’ 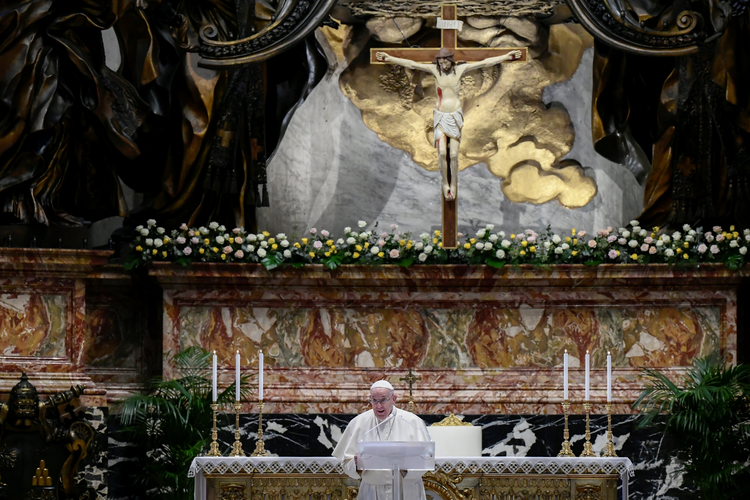 The resurrection of Jesus from the dead is the source of hope for humankind, Pope Francis told a global audience on Easter Sunday in his “Urbi et Orbi” (“to the city and the world”) address. He also offered a message of hope to people throughout the world who are suffering from the Covid-19 pandemic and called for an equitable distribution of vaccines to poorer countries.

For the second year in a row, he delivered his Easter message from inside St. Peter’s Basilica because of the pandemic. Pope Francis told his global audience on television, radio and social media that “the Easter message does not offer us a mirage or reveal a magic formula. It does not point to an escape from the difficult situation we are experiencing.”

He noted that “the pandemic is still spreading, while the social and economic crisis remains severe, especially for the poor.” In addition, he said, “the scandal of today” is that “armed conflicts have not ended, and military arsenals are being strengthened.” Indeed, “there are still too many wars and too much violence in the world.” He prayed to the risen Lord, “who is our peace, to help us to overcome the mindset of war,” and called on world leaders to “curb the race for new weaponry.” Noting that today—April 4—is International Day for Mine Awareness and Assistance in Mine Action, he again called for their elimination.

Pope Francis: “The Easter message does not offer us a mirage or reveal a magic formula. It does not point to an escape from the difficult situation we are experiencing.”

In the midst of this complex reality, Pope Francis said, “the Easter message speaks concisely of the event that gives us the hope that does not disappoint: “Jesus who was crucified has risen.”

Christ, he said, “is hope for all who continue to suffer because of the pandemic, both the sick and those who have lost a loved one.” He prayed that Christ may “sustain the valiant efforts of doctors and nurses” who are on the frontline in combating the pandemic. He emphasized that “everyone, and especially the most vulnerable among us, requires assistance and has the right to have access to necessary care.” This has become more evident at this time when we are all called to combat the pandemic, he said.

“In a spirit of global responsibility,” he said, all nations should “commit to overcoming delays in the distribution of vaccines and to facilitate their distribution, especially in the poorest countries.” From the beginning of the pandemic, Francis has been deeply concerned about its disastrous economic effects on people. Today, he prayed that the crucified and risen Lord may be a “comfort for those who have lost their jobs or experience serious economic difficulties and lack adequate social protection.” He prayed that Christ “may inspire public authorities to act so that everyone, especially families in greatest need, will be offered the assistance needed for their decent sustenance.”

Several times in recent months, Francis has expressed concern for young people affected by the pandemic. Today he emphasized that “the Risen Christ is hope for the many young people who are forced to spend long periods without attending school or university, and without sharing time with friends,” adding that we all have need of “real human relations,” not merely “virtual” ones, and said this is even more true of young people in the formative years of their life.

His address included specific mentions to many situations of conflict and suffering worldwide. Pope Francis has spoken out several times on the dramatic situation in Myanmar since the military coup in that country on Feb. 1, and today he spoke in support of the young people of that country. “I am close to the young people of the whole world and, at this time, in a special way to those of Myanmar, who are committed to democracy and making their own voice heard in a peaceful way, conscious that hate can only be dissipated by love,” he said.

Pope Francis called for an end to all restrictions on freedom of worship and religion worldwide and that "everyone be allowed to pray and praise God freely.”

Pope Francis, himself the son of immigrants to Argentina, again drew attention to the plight of the world’s 281 million migrants, especially those who flee from war and misery. He prayed that the risen Lord may be “a source of rebirth” for them and that believers would recognize in their faces “the disfigured and suffering face of the Lord.” He appealed to people to show “concrete signs of solidarity and human fraternity to them,” and he thanked especially Lebanon and Jordan for giving assistance to almost two million refugees fleeing the conflict in Syria that started in 2011.

The pope turned next to socioeconomic and political crises in Lebanon, and prayed that its seven million people may receive assistance from the international community. Francis also appealed for an end both to the ten-year conflict in Syria, “where millions of persons are living in inhuman conditions,” and to the equally disastrous seven-year conflict in Yemen that continues amid a “deafening and scandalous silence.” He also called for an end to the conflict in Libya, where he sees signs of hope for a negotiated solution.

“The resurrection naturally leads to Jerusalem,” Francis said, and invited his global audience to pray for “peace and security” in the city that is holy to the world’s three largest monotheistic faiths. He urged people to pray that Israelis and Palestinians “may find again the strength of dialogue so as to reach a stable solution that sees two states living side by side in peace and prosperity.”

Pope Francis on Palm Sunday: ‘In drawing close to those ill-treated by life, we are loving Jesus.’
Gerard O’Connell

A month after his visit to Iraq, he prayed today that Iraq “may continue on the journey to peace that it has set out on.”

He next turned his attention to “the peoples of Africa” whose future is being “compromised” by “internal conflicts and international terrorism,” especially in the Sahel and Nigeria, as well as in the Tigray region of Ethiopia and Mozambique’s northern region of Cabo Delgado. He encouraged those involved in these conflicts to seek a solution through “fraternal and constructive dialogue in a spirit of reconciliation and solidarity.”

He also prayed for the release of the prisoners of conflicts in eastern Ukraine and Nagorno-Karabakh, as well as the people of Haiti.

As he concluded his ninth Easter message since becoming pope, Francis turned to his fellow Christians and noted that “again this year, in various places many Christians have celebrated Easter under severe restrictions and, at times, without being able to attend liturgical celebrations.” He asked his audience to pray “that those restrictions, as well as all restrictions on freedom of worship and religion worldwide, may be lifted and everyone be allowed to pray and praise God freely.”