Pope Francis on Palm Sunday: ‘In drawing close to those ill-treated by life, we are loving Jesus.’ 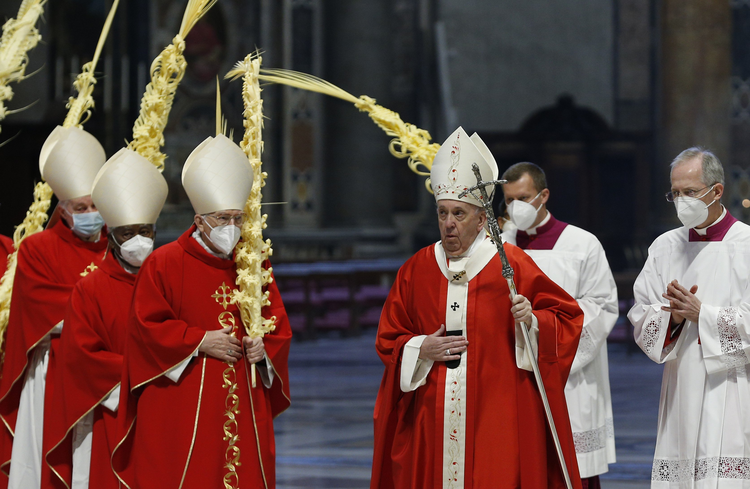 Pope Francis opened Holy Week celebrations today by leading the Palm Sunday ceremony in St. Peter’s Basilica for the ninth successive year since his election as pope on March 13, 2013.

“For the second time we are living in the context of the pandemic. Last year we were more shocked, this year we are more tried, and the economic crisis has become heavier,” he said after reciting the Angelus at the end of Mass.

“In this historic and social situation, what is God doing?” he asked, referring to the more than 100 million Covid-19 cases and more than 2.7 million deaths from the pandemic worldwide in the past year. “He takes up the cross. Jesus takes the cross; that is, he takes on himself the evil that this reality brings, the physical, psychological and above all the spiritual evil, because the Evil One takes advantage of this crisis to sow distrust, desperation and lies.”

Pope Francis: Jesus “experienced our deepest sorrows: failure, loss of everything, betrayal by a friend, even abandonment by God."

Addressing the worldwide audience for the internationally televised ceremony, Francis asked, “And we, what must we do [in this situation]?” His answer: “The Virgin Mary, the Mother of Jesus and his first disciple, shows us the way.” She “followed her son” and “took on herself her own part of the suffering, of the darkness and bewilderment, and she walked on the road of the Passion, keeping alive in her heart the lamp of faith.”

Pope Francis said that “we too, with the grace of God, can make the same journey. And along the daily ‘way of the cross,’ we encounter many brothers and sisters in difficulty. Let us not pass by, let our hearts be moved with compassion and draw near.”

He then invited his global audience to join him in prayer for all victims of violence, especially for “the victims of his morning’s attack in Indonesia, in front of the cathedral of Makassar.” A number of people were killed or injured in a suicide bombing attack in front of a crowded church in Makassar in Indonesia’s South Sulawesi province.

In his first seven years as pope, Francis opened Holy Week by participating in a colorful procession in St. Peter’s Square, recalling Jesus’ triumphal entry to Jerusalem before his passion and death. Because of the pandemic, last year and again this year there was only a very short procession inside the basilica. Around 30 cardinals and top officials of the Secretariat of State participated in the procession. Only 120 congregants could attend today’s ceremony.

Pope Francis: “When faith no longer experiences amazement, it grows dull: It becomes blind to the wonders of grace."

In his homily, Pope Francis focused on two key words: “admiration” and “amazement.”

“Every year this liturgy leaves us amazed: we pass from the joy of welcoming Jesus as he enters Jerusalem to the sorrow of watching him condemned to death and then crucified,” he said. “That sense of interior amazement will remain with us throughout Holy Week.”

He recalled how many of the people of Jerusalem at first admired Jesus and shouted “Hosanna,” but later cried out for his crucifixion. “They were following an idea of the Messiah rather than the Messiah,” Francis said. “They admired Jesus, but they did not let themselves be amazed by him.”

“Amazement is not the same as admiration,” he continued. “Admiration can be worldly, since it follows its own tastes and expectations. Amazement, on the other hand, remains open to others and to the newness they bring.”

Even today, the pope noted, there are many people who admire Jesus because “he said beautiful things; he was filled with love and forgiveness; his example changed history.” But “to admire Jesus is not enough,” he said. “We have to follow in his footsteps, to let ourselves be challenged by him; to pass from admiration to amazement.”

It is amazing to see “the God of the universe stripped of everything and crowned with thorns instead of glory,” he continued, “to see the one who is goodness personified insulted and beaten.” Jesus endured the humiliation “for us, to plumb the depths of our human experience, our entire existence, all our evil. To draw near to us and not abandon us in our suffering and our death. To redeem us, to save us.”

Jesus “experienced our deepest sorrows: failure, loss of everything, betrayal by a friend, even abandonment by God,” the pope said. “By experiencing in the flesh our deepest struggles and conflicts, he redeemed and transformed them. His love draws close to our frailty; it touches the very things of which we are most ashamed. Yet now we know that we are not alone: God is at our side in every affliction, in every fear; no evil, no sin will ever have the final word. God triumphs.”

A Palm Sunday message from Pope Francis: Do not be afraid; you are not alone
Gerard O’Connell

Pope Francis invited his global audience “to ask for the grace to be amazed,” saying that “a Christian life without amazement becomes drab and dreary. How can we talk about the joy of meeting Jesus, unless we are daily astonished and amazed by his love, which brings us forgiveness and the possibility of a new beginning?”

“When faith no longer experiences amazement, it grows dull: It becomes blind to the wonders of grace; it can no longer taste the Bread of life and hear the Word; it can no longer perceive the beauty of our brothers and sisters and the gift of creation.” Adding to his prepared text, he said, “And it has no other way except to take refuge in legalisms, in clericalisms and in all those things that Jesus condemns in Chapter 23 of the Gospel according to St. Matthew.”

The pope encouraged believers worldwide to “gaze upon Jesus on the cross and say to him: Lord, how much you love me! How precious I am to you!” He encouraged them, “Let us be amazed by Jesus so that we can start living again, for the grandeur of life lies not in possessions and promotions, but in realizing that we are loved and in experiencing the beauty of loving others.”

“In the crucified Jesus,” he said, “We see God humiliated, the Almighty dismissed and discarded. And with the grace of amazement, we come to realize that in welcoming the dismissed and discarded, in drawing close to those ill-treated by life, we are loving Jesus. For that is where he is: in the least of our brothers and sisters, in the rejected and discarded.” And, he said, adding to his prepared text, “in those whom our pharisaical culture condemns.”