Read: Pope Francis explains each day of the Easter Triduum 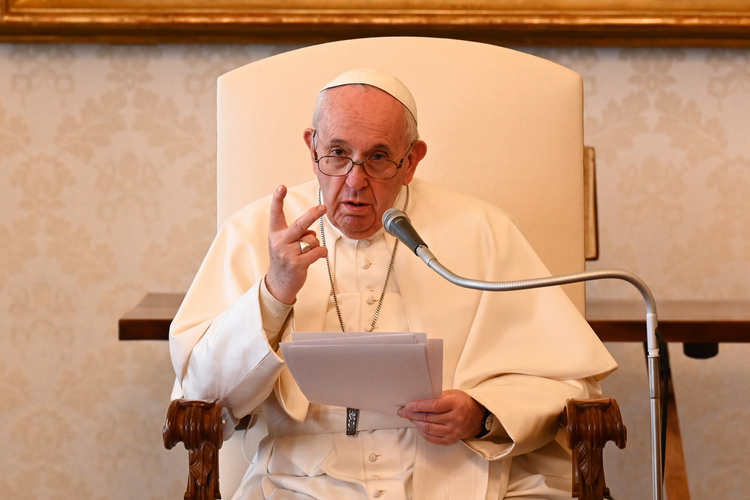 Pope Francis speaks during his general audience in the library of the Apostolic Palace at the Vatican March 31, 2021. The pope reflected on the Easter triduum and the hope Christ's passion, death and resurrection brings in uncertain times. (CNS photo/Vatican Media)

Below is the text of Pope Francis’ weekly Wednesday audience, delivered on March 31, 2021, Wednesday of Holy Week.

Already immersed in the spiritual atmosphere of Holy Week, we are on the eve of the Easter Triduum. From tomorrow until Sunday we will live the central days of the Liturgical Year, celebrating the mystery of the Passion, Death and Resurrection of the Lord. And we live this mystery every time we celebrate the Eucharist. When we go to Mass, we do not go only to pray, no: we go to renew, to bring about again, this mystery, the Paschal mystery. It is important not to forget this. It is as though we were to go to Calvary – it is the same – to renew, to bring about again the Paschal mystery.

When we go to Mass, we do not go only to pray, no: we go to renew, to bring about again, this mystery, the Paschal mystery.

On the evening of Holy Thursday, as we enter the Easter Triduum, we will relive the Mass known as in Coena Domini, that is, the Mass in which we commemorate the Last Supper, there, in that moment. This is the evening when Christ left his disciples the testament of his love in the Eucharist, not as a remembrance, but as a memorial, as his everlasting presence.

Every time we celebrate the Eucharist, as I said at the beginning, we renew this mystery of redemption. In this Sacrament, Jesus substituted the sacrificial victim—the Paschal lamb—with himself: his Body and Blood grant us salvation from the slavery of sin and death. The salvation from every form of slavery is there. It is the evening in which he asks us to love one another by becoming servants to one another, as he did in washing the disciples' feet, a gesture that anticipates his bloody oblation on the cross. And indeed, the Master and Lord will die the next day to purify not the feet, but the hearts and the entire life of his disciples. It was an oblation of service to us all, because with that service of his sacrifice he redeemed us all.

Good Friday is the day of penance, fasting and prayer. Through the texts of the Sacred Scripture and the liturgical prayers, we will gather as though we were on Calvary to commemorate the redemptive Passion and Death of Jesus Christ. In the intensity of the rite, through the Liturgical Action, the Crucifix will be presented to us to adore. Adoring the Cross, we will relive the journey of the innocent Lamb sacrificed for our salvation. We will carry in our minds and hearts the sufferings of the sick, the poor, the rejected of this world; we will remember the “sacrificed lambs,” the innocent victims of wars, dictatorships, everyday violence, abortions.... Before the image of the crucified God, we will bring, in prayer, the many, the too many who are crucified in our time, who only from Him can receive comfort and meaning in their suffering. And nowadays there are many: do not forget the crucified of our time, who are the image of Jesus Crucified, and Jesus is in them.

Before the image of the crucified God, we will bring, in prayer, the many, the too many who are crucified in our time.

Ever since Jesus took upon himself the wounds of humanity and death itself, God’s love has irrigated these deserts of ours, he has enlightened our darkness. Because the world is in darkness. Let us make a list of all the wars that are being fought in this moment; of all the children who die of hunger; of children who have no education; of entire populations destroyed by wars, by terrorism. Of the many, many people who, just to feel a bit better, need drugs, the drug industry that kills … It is a disaster, it is a desert! There are small “islands” of the people of God, both Christian and of all other faiths, that hold in their heart the desire to be better.

But let us tell the truth: in this Calvary of death, it is Jesus who suffers in his disciples. During his ministry, the Son of God disseminated life by the handful, healing, forgiving, reviving… Now, in the hour of his supreme Sacrifice on the cross, he brings to fulfillment the task entrusted to him by the Father: he enters into the abyss of suffering, he enters into these disasters of this world, to redeem and transform. And also to free every one of us from the power of darkness, of pride, of resistance to being loved by God. And this, only God’s love can do this. By his wounds we have been healed (see 1 Pt 2: 24), the apostle Peter says, by his death we have been reborn, all of us.

Following the Stations of the Cross—digitally
America Staff

And thanks to him, abandoned on the cross, no one will ever again be alone in the darkness of death. Never, he is always beside us: we need only open our heart and let ourselves be looked upon by him.

Holy Saturday is the day of silence, lived by the first disciples in mourning and bewilderment, shocked by Jesus’ ignominious death. While the Word is silent, while Life is in the tomb, those who had hoped in him were put to a difficult test, they feel like orphans, perhaps even orphaned by God.

This Saturday is also Mary's day: she too lived it in tears, but her heart was full of faith, full of hope, full of love. The Mother of Jesus had followed her Son along the path of sorrows and remained at the foot of the cross, with her soul pierced. But when it all seemed to be over, she kept watch, she kept vigil, in expectation, maintaining her hope in the promise of God who raises the dead. Thus, in the world’s darkest hour, she became the Mother of believers, the Mother of the Church and sign of hope. Her witness and her intercession sustain us when the weight of the cross becomes too heavy for each one of us.

In the darkness of Holy Saturday, joy and light will break through with the rites of the Easter Vigil and, in the late evening, the festive singing of the Alleluia. It will be an encounter in faith with the Risen Christ, and the joy of Easter will continue throughout the following fifty days, until the coming of the Holy Spirit. He who was crucified is risen! All questions and uncertainties, hesitations and fears are dispelled by this revelation.

Christ’s Cross is a sign of the hope that does not disappoint; and it tells us that not even one tear, not one sigh is lost in God’s plan.

The Risen One gives us the certainty that good always triumphs over evil, that life always conquers death, and it is not our end to descend lower and lower, from sorrow to sorrow, but rather to rise up high. The Risen One is the confirmation that Jesus is right in everything: in promising us life beyond death and forgiveness beyond sins. The disciples doubted, they did not believe. The first to believe and to see was Mary Magdalene; she was the apostle of the resurrection who went to announce that she had seen Jesus, who had called her by name. And then, all the disciples saw him.

But, I would like to pause at this point: the guards, the soldiers, who were in the tomb to prevent the disciples from coming and taking his body, they saw him; they saw him alive and risen. His enemies saw him, and then they pretended not to have seen him. Why? Because they were paid. Here is the true mystery of what Jesus once said: “There are two masters in the world, two, no more: two. God and money. He who serves money is against God”. And here it is money that changed reality. They had seen the wonder of the resurrection, but they were paid to keep quiet. Think of the many times that Christian men and women have been paid not to acknowledge in practice the resurrection of Christ, and did not do what Christ asked us to do, as Christians.

Dear brothers and sisters, again this year we will live the Easter celebrations in the context of the pandemic. In many situations of suffering, especially when they are borne by people, families and populations already tried by poverty, disasters or conflicts, Christ’s Cross is like a beacon that indicates the port to ships that are still afloat on stormy seas. Christ’s Cross is a sign of the hope that does not disappoint; and it tells us that not even one tear, not one sigh is lost in God’s plan. Let us ask the Lord to grant us the grace of serving him and acknowledging him, and of not letting ourselves be paid to forget him.