A Palm Sunday message from Pope Francis: Do not be afraid; you are not alone

A Palm Sunday message from Pope Francis: Do not be afraid; you are not alone 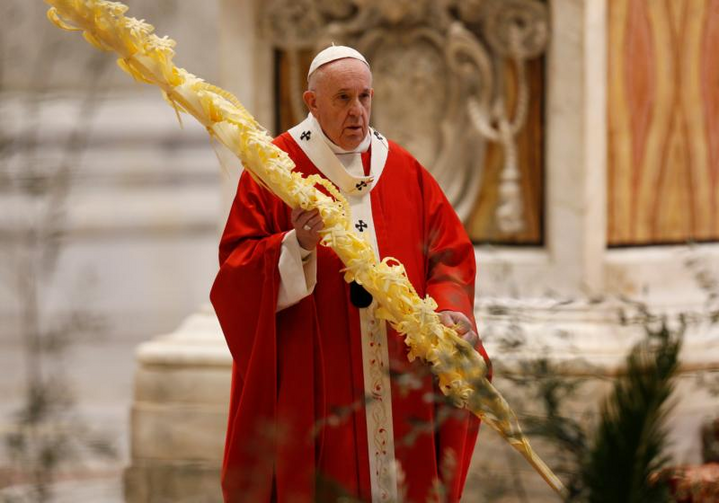 Pope Francis celebrates Palm Sunday Mass in St. Peter's Basilica at the Vatican on April 5, 2020. The Mass was celebrated without the presence of the public as Italy battles the coronavirus. (CNS photo/Paul Haring)

For the first time in living memory, a pope celebrated a Palm Sunday liturgy without the participation of the people, as Pope Francis did this morning in a virtually empty St. Peter’s Basilica. Holy Week begins in the midst of the coronavirus pandemic that has led to severe restrictions on movement being placed on almost half of the world’s population.

Pope Francis celebrated the liturgy at the altar of the chair of St. Peter, in the apse behind the main altar. Hanging behind him was the miraculous crucifix from the church of St. Marcello in Rome, which was carried through the streets at the time of the plague in 1522 and is credited with ending the pestilence. Placed next to the crucifix was the much venerated Byzantine image of Our Lady, the protectress of Rome (“Salus Populi Romani”), which is normally in the basilica of St. Mary Major. It is credited with saving the Romans from a plague in the 6th century and a cholera epidemic in the 19th century. These images will remain in St. Peter’s Basilica throughout Holy Week.

Pope Francis celebrated the Mass in Italian, while a downsized Sistine Choir of around 9 men—standing at a distance from one another—sang the Credo, Sanctus and other prayers in Gregorian chant. There was no offertory procession or kiss of peace.

This morning, Pope Francis began the liturgy by blessing a handmade palm, and then walked with it to the altar without the traditional procession. He celebrated the Mass in Italian, while a downsized Sistine Choir of around 9 men—standing at a distance from one another—sang the Credo, Sanctus and other prayers in Gregorian chant. There was no offertory procession or kiss of peace.

In his homily, Pope Francis sought to encourage his global audience of countless millions who were following this unique celebration by television, radio or social media. Drawing on the Gospel account of Jesus’ passion and crucifixion, he recalled that Jesus “descended into the abyss of our most bitter sufferings, culminating in betrayal and abandonment,” and said that from this experience Jesus’s message to us today is this: “Do not be afraid, you are not alone. I experienced all your desolation in order to be ever close to you.”

“Today, in the tragedy of a pandemic, in the face of the many false securities that have now crumbled,” Francis said, “in the face of so many hopes betrayed, in the sense of abandonment that weighs upon our hearts, Jesus says to each one of us: ‘Courage, open your heart to my love. You will feel the consolation of God who sustains you’.” He told the small congregation in the basilica of some thirty persons standing at a distance from each other and the larger global audience that Jesus had “served us even to the point of being betrayed and abandoned,” and that, “we were put in this world to love him and our neighbors. Everything else passes away, only this remains.”

Drawing on the Gospel account of Jesus’ passion and crucifixion, Pope Francis recalled that Jesus “descended into the abyss of our most bitter sufferings, culminating in betrayal and abandonment."

Francis added that “the tragedy we are experiencing summons us to take seriously the things that are serious, and not to be caught up in those that matter less; to rediscover that life is of no use if not used to serve others. For life is measured by love.” He continued:

So, in these holy days, in our homes, let us stand before the Crucified One, the fullest measure of God’s love for us, and before the God who serves us to the point of giving his life, and let us ask for the grace to live in order to serve. May we reach out to those who are suffering and those most in need. May we not be concerned about what we lack, but what good we can do for others.

At this point, Francis turned to young people worldwide. He recalled that for the past 35 years Palm Sunday had been dedicated to them in memory of the fact that young people had welcomed Jesus on his entry to Jerusalem. “Dear friends, look at the real heroes who come to light in these days,” said Francis. “They are not famous, rich and successful people; rather, they are those who are giving themselves in order to serve others. Feel called yourselves to put your lives on the line. Do not be afraid to devote your life to God and to others.”

Because of Covid-19, Pope Francis will celebrate Holy Week ceremonies without the public present
Gerard O’Connell

At the end of Mass, Pope Francis greeted all those who were following the celebration through television, radio or social media. “Let us walk together with faith in this Holy Week in which Jesus suffered, died and rose again,” he said. He encouraged people who cannot participate in this week’s liturgical celebrations “to gather together in their homes in prayer” also with the help of social media. He urged them “to be close spiritually to those who are sick, to their families, and to all those who care for them in a selfless way.” He called on everyone to “pray for those who have died” and assured people worldwide that “each one is present in our heart, in our remembrance, in our prayer.” He encouraged them too to pray to Our Lady, “who walks with us, and sustains our hope at this time.”