Pope Francis celebrates 500 years of Christianity in the Philippines 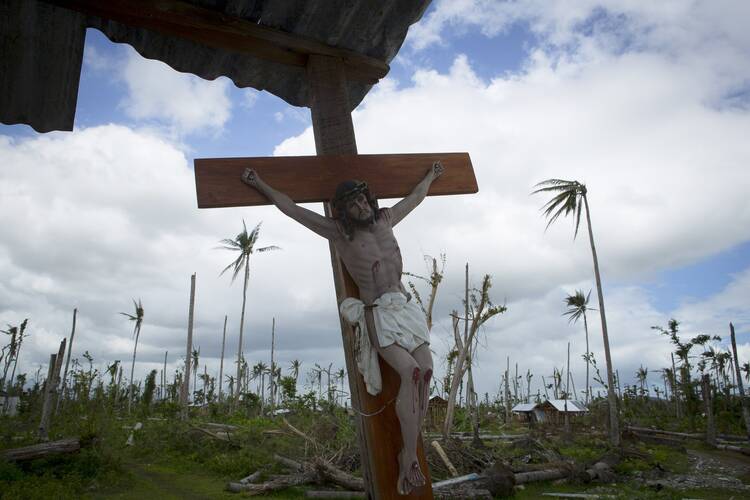 A crucifix is displayed in Barangay Cabarasan Guti, a community in Tanauan, Philippines, Feb. 6, 2014. Obedience means to hear the word of God and act on it. (CNS photo/Tyler Orsburn)

Pope Francis presided over a truly festive Eucharistic celebration in St. Peter’s Basilica this morning, March 14, to commemorate the arrival of the Gospel of Jesus in the Philippines 500 years ago.

Cardinal Luis Antonio Tagle, the former archbishop of Manila and now prefect of the Congregation for the Evangelization of Peoples, concelebrated the Mass with him. Because of the pandemic only 180 Filipinos could participate in the celebration, including two cardinals, several priests, as well as women and men religious and lay faithful. Many wore the traditional colorful dress of their islands and waved white handkerchiefs when “Lolo Kiko”—as they affectionately called Francis in the Philippines when he visited in January 2015—arrived.

Wearing pink colored vestments, Pope Francis came at the end of a procession that was headed by a young woman carrying a statue of the Holy Child of Cebu and a young man holding a replica of the Magellan Cross that was first planted on Filipino soil soon after the Portuguese explorer, Ferdinand Magellan, leading a Spanish expedition, reached the Philippines on March 16, 1521. The first Mass in the Philippines is believed to have been celebrated on March 31, on the Filipino island of Limasawa. At today’s celebration, the cross and the statue were accompanied by Filipino women dancers, followed by the cardinals and other clergy.

Commenting on the Gospel of the day that recounted how “God so loved the world that he gave his only-begotten Son” (Jn 3:16), Pope Francis told his Filipino congregation here and abroad, “This is the heart of the Gospel; this is the source of our joy.”

Pope Francis: “You received the joy of the Gospel: the good news that God so loved us that he gave his Son for us. And this joy is evident in your people.”

He reminded them that “the source of our joy is not an elegant theory about how to find happiness, but the actual experience of being accompanied and loved throughout the journey of life.” He told them, “God has always looked at us with love, and for the sake of love, he came among us in the flesh of his Son. In Jesus, he went in search of us when we were lost. In Jesus, he came to raise us up when we fell. In Jesus, he wept with us and healed our wounds. In Jesus, he blessed our life forever.”

Francis said, “God does not love us in words: he gives us his Son, so that whoever looks at him and believes in him will be saved (cf. Jn 3:14-15).” Indeed, he said, “the more we love, the more we become capable of giving. That is also the key to understanding our life. It is wonderful to meet people who love one another and share their lives in love. We can say about them what we say about God: they so love each other that they give their lives. It is not only what we can make or earn that matters; in the end, it is the love we are able to give. This is the source of joy!”

Then, addressing the Filipinos present in the basilica, the 110 million living in 7,641 Philippine islands and the 10 million Filipino migrants scattered in many countries across the globe, many of whom who were following the celebration on streaming or television, Pope Francis recalled that when the Christian message first arrived in their homeland five centuries ago, “You received the joy of the Gospel: the good news that God so loved us that he gave his Son for us. And this joy is evident in your people. We see it in your eyes, on your faces, in your songs and in your prayers.”

Looking at them, he said, “I want to thank you for the joy you bring to the whole world and to our Christian communities.” He recalled “the many beautiful experiences in families here in Rome—but also throughout the world—where your discreet and hardworking presence became a testimony of faith.”

He may have been thinking of the thousands of Filipinos who attended his Masses in the Holy Land in 2014, in Abu Dhabi in 2019 and in other places too which he visited. He told them that by giving testimony to their faith in this discreet way “you are following in the footsteps of Mary and Joseph” and he reminded them, “God loves to bring the joy of faith through humble, hidden, courageous and persevering service.”

Pope Francis encouraged these modern-day missionaries as they celebrate this fifth centenary of the arrival of the Christian Gospel in their homeland, “to persevere in the work of evangelization—which is not the same as proselytism” and said, “The Christian proclamation that you have received needs constantly to be brought to others.” Indeed, he said, “The Gospel message of God’s closeness cries out to be expressed in love for our brothers and sisters.”

“I want to thank you for the joy you bring to the whole world and to our Christian communities.”

He assured them that “God desires that no one perish” and “for this reason, he asks the church to care for those who are hurting and living on the fringes of life. God so loves us that he gives himself to us, and the Church has this same mission. She is sent, not to judge but to welcome; not to make demands, but to sow seeds; not to condemn, but to bring Christ who is our salvation.”

Aware that the pastoral program of the Filipino church “is a missionary commitment that involves everyone and reaches everyone,” Francis told them, “Never be discouraged as you walk this path. Never be afraid to proclaim the Gospel, to serve and to love.” He assured them that “with your joy, you will help people to say of the church too that ‘she so loved the world.’”

Pope Francis concluded his homily at the Mass, at which readings, prayers and joyful hymns were expressed in Tagalog (the basic Filipino languages), Italian and English, by telling the Filipinos, “how beautiful and attractive is a church that loves the world without judging, a church that gives herself to the world.” He prayed the church “may be so in the Philippines and in every part of the earth.”

He recalled how the coming of the Christian faith to the Philippines “is God’s gift” and “was received by the majority of our people and given by them a Filipino character.” Today, he said, “the Philippines has the third largest number of Catholics in the world” and this too “is truly God’s gift.” He attributed “the enduring faith of the Filipino people only to God’s love, mercy and fidelity, not to any merit of our own” and said, “from 1521 to 2021, we see gift upon gift.”

The cardinal said, “We thank God for the bearers of the gift these 500 years: the pioneering missionaries, the religious congregations, the clergy, the grandmothers and grandfathers, the mothers and fathers, the teachers, the catechists, the parishes, the schools, the hospitals, the orphanages, the farmers, the laborers, the artists, and the poor whose wealth is Jesus.”

Cardinal Tagle told the pope, “By God’s grace, the Filipino Christians have continued to receive the faith, one of the sources of hope in facing poverty, economic inequality, political upheavals, typhoons, volcanic eruptions, earthquakes, and even the current pandemic.” He added that “as we confess our failure in living the faith in a consistent manner, we also recognize the great contribution of the Christian faith in shaping the Filipino culture and the Filipino nation.”

The Filipino cardinal told the pope and his global audience, “The gift must continue being a gift. It must be shared. If it is kept for oneself, it ceases to be a gift.”

Indeed, he said, “by God’s mysterious design, the gift of faith we have received is now being shared by the millions of Christian Filipino migrants in different parts of the world. We have left our families, not to abandon them, but to care for them and their future.

“For love of them, we endure the sorrow of separation. When lonely moments come, Filipino migrants find strength in Jesus who journeys with us, the Jesus who became a Child and known as the Nazarene, bore the Cross for us. We are assured of the embrace of our Mother Mary and the protection of the saints.”

Speaking with deep emotion, the cardinal told his friend the pope, “When we miss our families, we turn to the parish, our second home. When there is no one to talk with, we pour our hearts to Jesus in the Blessed Sacrament and ponder His word. We take care of the children under our charge as our own children, and the elderly as our own parents. We sing, we smile, we laugh, we cry, and we eat.”

Concluding his address, Cardinal Tagle told the pope, “We pray that through our Filipino migrants, the name of Jesus, the beauty of the church, and the justice, mercy and joy of God may reach the ends of the earth.” Then, looking at Francis with a smile, he said, “Here in Rome, when we miss our grandfathers, we know we have a Lolo Kiko. Thank you very much, Holy Father.”

Pope Francis, who had listened attentively and smiled at times, stood up to thank the cardinal whom he clearly likes and whom he has brought to Rome to assist him in the government of the universal church. Afterwards, they joined in the singing of the hymn to Our Lady and then processed out of the basilica with a look of joy on their faces.

The Catholic Church in the Philippines, for its part, has chosen Easter Sunday, April 4, to formally inaugurate a year-long celebration of its fifth centenary, ending in April 2022. The theme of the jubilee celebration is “Gifted to Give.”

Correction: An earlier version of this article stated incorrectly that “Lolo Kiko” meant “Grandpa George.” “Kiko” is a common nickname for Francisco, the Spanish version of Francis.