Dear Pope Francis: Thank you for 8 years of challenging and healing the church. But women still deserve more. 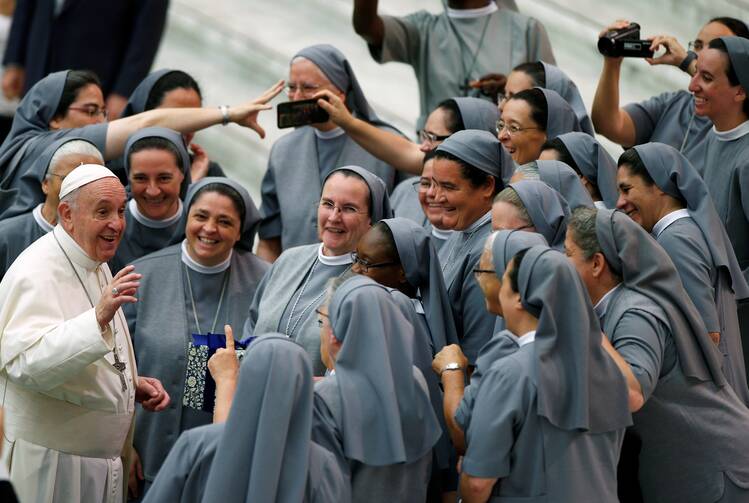 Pope Francis greets a group of women religious as he arrives for his general audience in Paul VI hall at the Vatican Aug. 7, 2019. (CNS photo/Yara Nardi, Reuters)

Editors’ note: This is the English translation of an open letter to Pope Francis by María Lía Zervino, the president of the World Union of Catholic Women’s Organisations. It is published here with the author’s permission.

First of all, a big thank you

Thank you for having given yourself completely in these eight years. From the beginning, you have challenged us with pastoral conversion for the whole Church and you are the first to strive for it. The Second Vatican Council marked a historical event in the life of the Church and from your pontificate there will be a milestone in the intense and long process of implementation of the Council. For this, as we Argentines say, you have “put all the meat on the grill” (“give it all one’s got”).

Thank you for letting yourself be guided by the Holy Spirit, as the Saint of Assisi. You responded to "Francis: go and rebuild my Church" and offered orientation with Evangelii gaudium. You heard the cry of the poorest and of the planet, identifying them in a single crisis, to which you teach us to respond with Laudato si’. And you discerned that the key to facing the problems of our world, plunged in a third world war fought piecemeal, is a society of brothers and sisters, as pointed out in Fratelli tutti and to continue on the path of ecumenism and interreligious dialogue, undertaken by your predecessors. Thank you for being the Francis of the 21st century and for your passion for families, especially those most in need, shown in Amoris laetitia.

Thank you for trying to purify and heal the open sores of the Church, the atrocities of modern abuses and slavery, the violations of the dignity of women and our detachment in living the Gospel daily. Thank you for moving beyond the criticism and the devil's whirlpool, guiding the boat of humanity in the midst of the storm caused by the Coronavirus. Thank you for showing us that it is essential to undertake processes to achieve change and that each change requires an educational process that involves everyone. Thank you especially for trying to give the Church the feminine face that identifies her by her tenderness, closeness and mercy.

Second, the desire to go one step further

Dear Pope Francis, I remember that last year you personally recommended us to be brave like Mary Magdalene even when addressing the Pope. That is why I allow myself to tell you, with all respect, trust and affection, that as a woman I feel that something is owed to us. You fight against machismo and clericalism, but I think that not enough progress has been made in taking advantage of the wealth of women who make up a large part of the People of God. There is already a theology of women with multiple elaborations. The suitability of women has been proven in civil society, in the economy, health, education, in caring for the planet, the defence of human rights and many other fields, of course, in addition to in the family and catechesis.

May the wish expressed by you for women to join decision-making teams together with men cease to be considered a utopia and become something common in the Church.

This message does not want to be a claim. It is not a question of occupying positions to be "like flower vases", just an ornament, because it is fashionable to appoint women, nor is it about reaching posts to “climb” to positions of power. No. It is about serving the Church with the gifts that the Creator Father has given us: a peculiar intelligence and sensitivity, an affectivity and particular capacity for the gestation and formation of people and a special aptitude for the generation of relational goods. May the wish expressed by you for women to join decision-making teams together with men cease to be considered a utopia and become something common in the Church.

Can I share a dream of mine with you? I dream of a Church that has suitable women as judges in all the courts in which matrimonial cases are processed, in the formation teams of each seminary and for exercising ministries such as listening, spiritual direction, pastoral health care, care for the planet, defence of human rights, etc., for which, by our nature, women are equally or sometimes better prepared than men. Not only consecrated women, but how many lay women in all regions of the globe are ready to serve!

And I dream that, during your pontificate, you will inaugurate, together with the Synods of Bishops, a different synod: the synod of the People of God, with proportional representation of the clergy, consecrated men and women, and lay men and women. We will no longer be happy just because a woman votes for the first time but because many prepared lay women, in communion with all the other members of such synod, will have given their contribution and their vote that will add to the conclusions that will be placed in your hands. Probably, Holy Father, you already have this “card in your deck” to put synodality into practice and wait for the right moment to play it.

I confess you that every morning, when I wake up, I ask myself: what is the Pope going to surprise us with today? Thank you for opening so many paths for the Church.

I assure you, dear Pope Francis, together with the communities to which I belong, the World Union of Catholic Women’s Organisations (WUCWO) and the Association of Consecrated Virgins Servidoras – founded in your diocese of origin, Buenos Aries, by Father Luis María Etcheverry Boneo, Servant of God – our prayer, entrusting you to Mary. Sorry for not having followed your footsteps in many respects. I commit myself, together with millions of Catholic women, to reflect more deeply on your teachings and to put them into practice.

I confess you that every morning, when I wake up, I ask myself: what is the Pope going to surprise us with today? Thank you for opening so many paths for the Church. And I thank the divine Providence for this and much more that we have received through you, during these first eight years of pontificate. 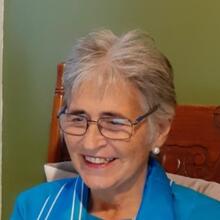 María Lía Zervino is the president of the World Union of Catholic Women’s Organisations.