Podcast: In Iraq with Pope Francis 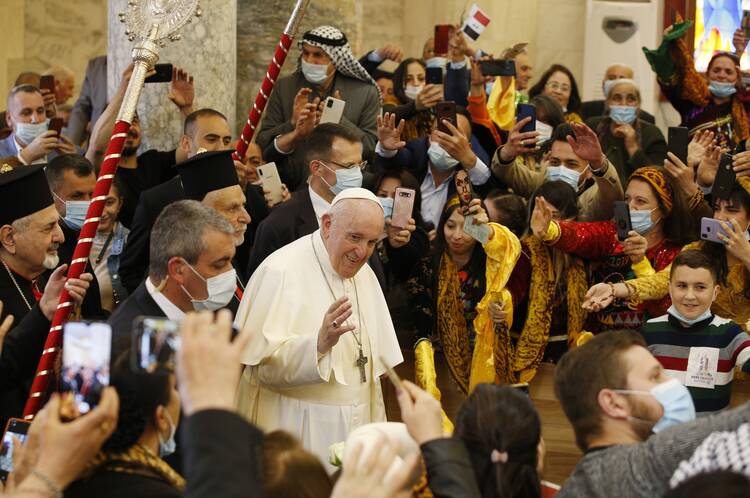 Pope Francis arrives for a visit with the community at the Church of the Immaculate Conception in Qaraqosh, Iraq, March 7, 2021. (CNS photo/Paul Haring)

Pope Francis visited Iraq March 5-8, and America’s Vatican correspondent Gerard O’Connell traveled with him. Fresh off the trip, Gerry joins host Colleen Dulle on “Inside the Vatican” to discuss what it was like to travel with the pope on his riskiest trip yet.

Pope Francis was determined to visit Iraq despite the increases in violence and coronavirus cases there because he wanted to encourage Iraqis to believe in their country’s future after decades of conflict. In particular, he hoped to bring hope to Iraq’s Christian minority, which shrunk by 75 percent as Christians fled persecution by Islamic State extremists.

Nobody at the Vatican wants Pope Francis to go to Iraq right now. Why is he so set on going?
Inside the Vatican

This week on the podcast, we hear from a young Iraqi Christian woman, Rashel Groo, who has had difficulty imagining a future for herself in her country. She went to see Pope Francis this weekend with her family. “He said so many words in each town [where] he went,” Rashel said. “All these words were...about the peace. This is what we need.” As Gerry said on this week’s show, “Peace means a future.”

[Hear more from Rashel Groo in our deep dive episode on Iraq.]

That peace will require reconciliation between the different communities in Iraq, particularly between the Shia Muslim majority and religious and ethnic minorities, like the Christians. Pope Francis worked in this trip to strengthen Christian-Muslim relations by visiting with Grand Ayatollah Ali Al-Sistani, one of the most revered clerics in Shia Islam. Gerry describes how Iraqi Christians and Muslims reacted to the leaders’ meeting positively, believing it would be a step towards peace in the country.

As for Rashel, while she said it was difficult to know exactly what effect the pope’s visit would have long-term, “I feel that something good is going to happen, really. I don’t know when, but I think it’s going to happen. I’m sure from this [visit].”