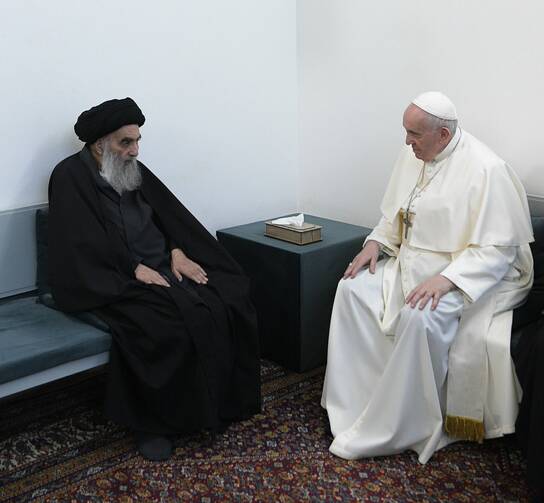 Pope Francis had a private, 45-minute meeting with Grand Ayatollah Ali al-Sistani, 90, a revered spiritual and highly influential leader of Shia Muslims, on the second day of his visit to Iraq. The unprecedented encounter is widely considered of the utmost importance for Christian-Muslim relations and peace in Iraq and other countries.

While some world leaders build coalitions for war, with this trip Pope Francis hopes to build an international religious coalition for peace, including not only Christians and Muslims but believers of other faiths.

Their meeting lasted longer than scheduled, and sources told America that both sides were “very pleased” at how the encounter between the religious leaders went.

Francis flew early Saturday morning from Baghdad to Najaf to visit Ayatollah al-Sistani at his home. As he rode into the city in a black, bulletproof Mercedes-Benz, people lined the narrow streets and waved Vatican and Iraqi flags. At the ayatollah’s house, the pope was welcomed by the release of white doves. The Islamic leader’s son accompanied Francis inside. Before entering the house, the pope took off his shoes, as is the custom. In an unusual act of respect, the ayatollah stood up to greet the pope.

While some world leaders build coalitions for war, Pope Francis hopes to build an international religious coalition for peace, including not only Christians and Muslims but believers of other faiths.

The two leaders of Christianity and Shia Islam sat beside a small wooden table and spoke with the assistance of the pope’s Palestinian-born translator.

Representatives of both leaders released statements after the meeting. “The Holy Father stressed the importance of collaboration and friendship between religious communities,” said Matteo Bruni, the director of the Vatican press office, “for contributing—through the cultivation of mutual respect and dialogue—to the good of Iraq, the region, and the entire human family.”

The encounter, Mr. Bruni said, was “an occasion for the Pope to thank Grand Ayatollah al-Sistani for speaking up—together with the Shiite community—in defense of those most vulnerable amid the violence and the great hardships of recent years, and for affirming the sacredness of human life and the importance of the unity of the Iraqi people.”

The ayatollah’s office also issued a statement, saying the two men discussed “the great challenges that humanity faces in this era and the role of faith in God Almighty and his messages, and the commitment to high moral values.” The statement listed several topics that the ayatollah had spoken about with the pope, including “injustice, oppression, poverty, religious and intellectual persecution, suppression of basic freedoms, the absence of social justice,...wars, acts of violence, economic blockades, the displacement of many peoples in our region and, especially, the Palestinian people in the occupied territories.”

According to the information released, the ayatollah underlined “the role that the great religious and spiritual leaders should play in curbing these tragedies” and “in urging the concerned parties—especially the great powers—to give priority to reason and wisdom and to reject the language of war” and to respect “the rights of peoples to live in freedom and dignity.”

The ayatollah’s office “affirmed his desire that Christian citizens can live like all citizens in security and peace” and mentioned the efforts of the ayatollah to protect Christians when “the terrorists”—meaning the Islamic state—took control of part of the country. The statement concluded by wishing Pope Francis and Catholics “well-being and happiness” and thanking the pope for making the effort to travel to Najaf.

A “message of unity” in Ur

From Najaf, the pope traveled by plane and car to Ur, which was a great Sumerian city some 5,000 years ago. Under a canopy that protected them from the hot sun, Francis joined representatives of the religions present in this region today, among them Muslim, Christian, Yazidi and Sabean Mandean groups. The Vatican said that Jewish leaders were also invited, but they were not present. (No explanation was given.) The service included hymns, readings from the bible and the Quran, and testimonies by a Muslim, a Christian and a Sabean Mandean.

“God asked Abraham to raise his eyes to heaven and to count its stars,“ Francis said, linking back to the patriarch’s call 4,000 years ago. “In those stars, he saw the promise of his descendants; he saw us.” The pope continued, “Today we—Jews, Christians and Muslims—together with our brothers and sisters of other religions, honour our father Abraham by doing as he did: We look up to heaven and we journey on earth.”

“This blessed place brings us back to our origins, to the sources of God’s work, to the birth of our religions,” Pope Francis told the gathering of about 100 people and almost as many journalists. “Here, where Abraham our father lived, we seem to have returned home. It was here that Abraham heard God’s call; it was from here that he set out on a journey that would change history. We are the fruits of that call and that journey.”

“Heaven thus imparts a message of unity,” Francis explained. “The Almighty above invites us never to separate ourselves from our neighbors. The otherness of God points us towards others, towards our brothers and sisters.”

“The Almighty above invites us never to separate ourselves from our neighbors.”

However, he added, “If we exclude God, we end up worshiping the things of this earth. Worldly goods, which lead so many people to be unconcerned with God and others, are not the reason why we journey on earth.... This is true religiosity: to worship God and to love our neighbor.”

Francis recalled the tormented recent history of much of the Middle East and appealed for a rejection of any religious justification for the violence suffered by so many innocent people. “From this place, where faith was born, from the land of our father Abraham, let us affirm that God is merciful and that the greatest blasphemy is to profane his name by hating our brothers and sisters,” said Francis. “Let us not allow the light of heaven to be overshadowed by the clouds of hatred!”

Speaking of the “dark clouds of terrorism, war and violence” in Iraq, the pope underscored the plight of the Yazidi community which, he said, “has mourned the deaths of many men and witnessed thousands of women, girls and children kidnapped, sold as slaves, subjected to physical violence and forced conversions.”

“Let us not allow the light of heaven to be overshadowed by the clouds of hatred!”

He invited those present and those watching on Iraqi television, “to pray for those who have endured these sufferings, for those who are still dispersed and abducted, that they may soon return home.” He also implored them “to pray that freedom of conscience and freedom of religion will everywhere be recognized and respected.”

Though Ur is in the south of Iraq, in his message Francis looked also to the northern part of the country, where he will go tomorrow and where the Islamic State wrought destruction between 2014 and 2017. “When terrorism invaded the north of this beloved country,” the pope said, “it wantonly destroyed part of its magnificent religious heritage, including the churches, monasteries and places of worship of various communities.”

But, the pope added, “even at that dark time, some stars kept shining.” He explained how “young Muslim volunteers” in the city of Mosul, which the Islamic State made its capital, “helped to repair churches and monasteries, building fraternal friendships on the rubble of hatred.” Christians and Muslims, he said, are “restoring mosques and churches together.”

Recalling again the example of Abraham, Francis said, “We too are called to leave behind those ties and attachments that, by keeping us enclosed in our own groups, prevent us from welcoming God’s boundless love and from seeing others as our brothers and sisters. We need to move beyond ourselves, because we need one another,” he emphasized. “There will be no peace unless peoples extend a hand to other peoples. There will be no peace as long as we see others as them and not us. There will be no peace as long as our alliances are against others, for alliances of some against others only increase divisions.”

The Covid-19 pandemic “has made us realize that no one is saved alone,” the pope said. “But the temptation to withdraw from others is never-ending.”

As the sun blazed down on the gathering, Francis declared: “It is up to us, today’s humanity, especially those of us believers of all religions, to turn instruments of hatred into instruments of peace.”

“Here we find ourselves at home, and from here, together, we wish to commit ourselves to fulfilling God’s dream that the human family may become hospitable and welcoming to all his children; that looking up to the same heaven, it will journey in peace on the same earth.”

One of those under the canopy with Pope Francis was the Iraqi imam Muder Alhilou, who is part of the school of the Ayatollah al-Sistani at Najaf. “It was a very important meeting for many reasons,” he said, when asked by America how he viewed the morning’s encounter between the ayatollah and the pope. “It puts Iraq in the world’s spotlight, and it sent a message of love to other cultures and to all peace lovers. Moreover, it sends a strong message to the international community that we want to promote love not hate. It also states clearly that we should sustain the Christian heritage in this land.”

The imam also underlined the fact that Ayatollah al-Sistani has “a great love for peace and tolerance, and the fact that he accepted to meet Pope Francis is because he sees the pope too shares this love.”

From Ur, a tireless Pope Francis returned to Baghdad. That evening, he celebrated Mass in the Chaldean rite in the crowded church of St. George in what was to all effects a highly militarized zone for his protection. Tomorrow, he travels north to the autonomous Kurdish region to pray in the city of Mosul and in the Christian village of Qaraqosh, where the Islamic State committed great destruction. Before leaving the Kurdish region he will celebrate a Mass for thousands of people, in the stadium of Erbil, the capital city of the Kurdistan Region of Iraq, his last public act in the country before he returns to Rome on Monday. 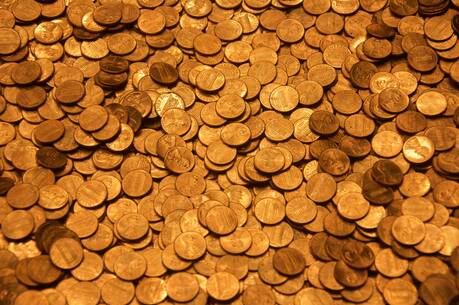 Blessed are the tax collectors, too
A reflection for the Friday of the Thirteenth Week in Ordinary Time, by Jim McDermott, S.J.
Jim McDermottJuly 01, 2022