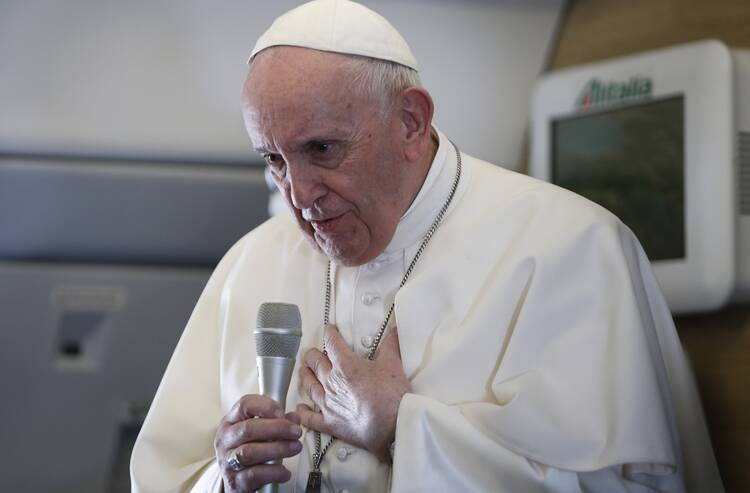 Pope Francis speaks with journalists aboard his flight from Baghdad to Rome March 8, 2021. (CNS photo/Paul Haring)

In an hour-long press conference on the plane returning from Baghdad to Rome, Pope Francis answered some eight questions relating to his meeting with Grand Ayatollah Ali al-Sistani, what he felt when he visited Mosul, whether in making the decision to go to Iraq he had taken into consideration the risk of people getting Covid-19 at the papal events and whether he would visit Lebanon.

He also spoke about how he felt he had “come back to life again” during the visit, after more than a year in “prison” when he could not meet people in audiences or foreign visits.

He extended good wishes to all women on the International Women’s Day this March 8, “the feast of the woman,” and praised the great work they do in the family and for society. The pope denounced how they are abused, trafficked, suffer violence and are subjected to genital mutilation in some African countries.

Francis spoke about how he felt he had “come back to life again” during the visit, after more than a year in “prison” when he could not meet people in audiences or foreign visits.

Pope Francis revealed that he is considering making a visit to Lebanon, “a country in crisis, a crisis of life,” and also plans to visit Hungary for the international eucharistic congress next September, as well as nearby Slovakia. He also said he desired to visit his homeland, Argentina, and could do so while visiting Uruguay and the south of Brazil, “as they have a similar culture,” if an occasion presents itself.

The Risk of Spreading Covid-19

There had been much discussion before the trip, particularly in the U.S. media, about whether it was right for the pope to go to Iraq because of the risk of spreading the coronavirus. While Francis and those accompanying him had received the vaccine, most Iraqis had not. This concern was given expression in a question posed to the pope by a reporter from The Washington Post, who asked about whether Francis had taken into consideration the fact that many people that would attend the papal events in Iraq could get infected with Covid-19, get sick and perhaps even die.

Pope Francis responded by explaining how he made the decision to go notwithstanding the risks. He explained that “the trips are cooked [prepared] over a period of time in my conscience. And this [pandemic] was one of the things that made me question in my mind, maybe, maybe.... I prayed much and in the end, I took the free decision that came from within. And I said, ‘The one who led me to take that decision, let him take care of the people.’ I made the decision, conscious of the risks.”

Pope Francis’ meeting with the Grand Imam of Al Azhar led to the publication of the Abu Dhabi document on human fraternity in 2019. One reporter asked if the pope’s meeting with Ayatollah al-Sistani will lead to a second document.

He recalled that the document on human fraternity was prepared with the Grand Imam of Al Azhar “over six months, in secret, praying and correcting.” He described it as “a first step” and said “this could be the second in a series and there could be others.” He said: “The journey of human fraternity is important. The document of Abu Dhabi made me restless, and so there came the encyclical, ‘Fratelli Tutti.’” He said it is important to study both documents, which “go in the same direction, seeking fraternity.”

“I said, ‘The one who led me to take that decision, let him take care of the people.’ I made the decision, conscious of the risks.”

He recalled that Ayatollah al-Sistani has a phrase: “Men are either brothers by religion or equals by creation.” Francis said interreligious dialogue “is also a cultural journey.” He emphasized that Christians must understand that with Muslims, “we are brothers, and we must continue forward [in the dialogue] with the other religions.” He recalled that “the Second Vatican Council did much” in promoting this dialogue through the establishment of the councils for Christian unity and interreligious dialogue.

Then, in a significant part of his response, Pope Francis emphasized that “many times one has to risk to take this step forward [in the dialogue].” He noted that “there are some critics who say the pope is not courageous; he is mindless [incosciente], that he does things that are contrary to the Catholic doctrine, that it is a heretical step, that there are risks.”

Responding to such critics, Francis said, “These decisions are taken in prayer, in dialogue, taking counsel and reflecting; they are not capricious; they are in line with what the [Second Vatican] Council taught.”

The pope emphasized that Christians must understand that with Muslims, “we are brothers, and we must continue forward [in the dialogue] with the other religions.”

Asked by another reporter if his meeting with Ayatollah al-Sistani was in a way also a message to the religious leaders of Iran, the pope answered without any specific mention of Iran. He said:

I believe it was a universal message. I felt that I had to make a pilgrimage of faith and penitence, to go to visit a great, wise, man of God. By just listening to him, one perceives this. Speaking of a message, it is a message for everyone. And he is a person who has wisdom and prudence.

The Grand Ayatollah told Francis that “for 10 years he has not received visitors with other objectives, [whether] political or cultural.” Francis said: “He was very respectful in the encounter; I feel honored. Also in greeting [people], he never stands up, but he stood up twice to greet me. He is humble and wise, this encounter did good to my soul. He is a light. Such wisdom is found in many sides; it is the wisdom of God.”

“The same is found with the saints,” Francis said, “who are not just those of the altars but those of every day, the saints next door, those who live their own faith with coherence. One has to highlight such people, put the spotlight on them, and there are many such examples.”

Will the pope visit Lebanon?

Asked if he would visit Lebanon, a country now in crisis but which St. John Paul II and Pope Benedict XVI called a message to the world because of the peaceful coexistence of Christians and Muslims in that land, Pope Francis said he was considering such a visit.

He agreed, “Lebanon is a message,” but “it suffers [now]. It is more than an equilibrium; it holds the delicate [balance] of diversity; it has the strength of public reconciliation.”

‘Peace more powerful than war’: Pope Francis ends his Iraq trip in the land once ruled by ISIS
Gerard O’Connell

He revealed that before he went to Iraq, the Maronite Patriarch Bechara Boutros Al-Rai asked him “to make a stop-over in Beirut on this journey to Iraq.” But, Francis said, a stop-over “seemed too little to me, just a crumb in the face of the problem of a country that is suffering like Lebanon.” He revealed that “I made [him] a promise to go to Lebanon, which is in this moment in crisis.”

Francis then went on to praise Lebanon for being “so generous in receiving refugees.”

Pope Francis, in response to another question, revealed that a week before he left the Vatican for Iraq, “12 Iraqi immigrants came to say goodbye before he left.” He recalled that one of them had lost his leg escaping from a truck in Pakistan. He then went onto reaffirm that “migration is a right, just as it is a right not to migrate. The world has not yet become conscious that migration is a human right.” He said that in Italy, a sociologist speaking of the country’s very low fertility rate, said that “in 40 years they would have to import foreigners because they have to work and pay the taxes for our pensions.”

On Sunday, Pope Francis met with the father of Alan Kurdi, the 3-year-old boy from Syria who drowned trying to reach Greece by raft. The image of his body lying on a beach in Turkey brought attention to the plight of migrants crossing the Mediterranean Sea in 2015. The pope described the boy “as a symbol that goes far beyond a dead child of migration; it is a symbol of civilizations that die, that cannot survive.”

His Time in Mosul

He said that when he was visiting the ruins of a destroyed church in Mosul, a thought came into his mind: “Who sold the arms to these destroyers?”

He said that when he was visiting the ruins of a destroyed church in Mosul, a thought came into his mind: “Who sold the arms to these destroyers? Those who sell the arms are responsible, at least let them have the sincerity to admit it.”

When will he restart public audiences?

Asked when he might restart holding public audiences again in the Vatican, Pope Francis replied that “there is a proposal to hold smaller ones but gradually,” But, he added, “I have not decided to do so until the [contagion] numbers decrease.”

He then went onto reveal his joy at being able to meet people on the visit to Iraq and said, “after all these months of prison, it was striking, that is to say coming back to life again because to touch the church, to touch the holy people of God, because a priest becomes a priest to serve the people of God, not for money or career.” He added that “the one thing that saves us [priests] from the leprosy of pride and cupidity is closeness [to the people of God] and not to become a privileged class of clerics or consecrated people. The contact with the people is what saves us.”