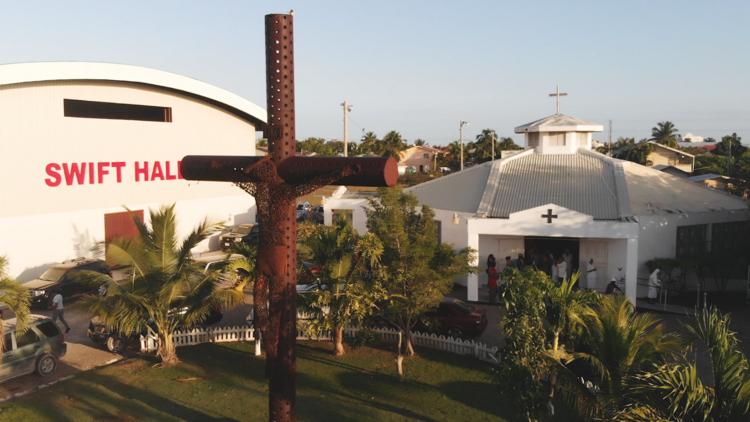 A Jesuit friend of mine says St. Martin de Porres Church is “the prayin’-est, singin’-est parish” he’s ever encountered. The first time I celebrated Mass here, I stayed put at the altar during the sign of peace (as the rubrics instruct) until an elderly Creole woman approached, grabbed my hand and literally pulled me into the congregation.

“Fada, get down off there and come be with the people,” she demanded.

The sign of peace was five minutes of joyful hugs from people I’d never met, all set to an exuberant soundtrack of Garifuna drums and singing: “Darangilou wamagua! Lian gu san waguchi woun!” (“Peace be with us! That’s what the Lord is asking of us!”)

Experimenting with virtual liturgies need not be a cause for despair but instead an invitation from the Lord to try something new.

For such a sacramental parish—where touch, sight and sound, boldfaced and in ALL CAPS, is the way we pray—Covid has been especially challenging. Belize entered a strict lockdown during the final weeks of Lent 2020, and St. Martin’s immediately transitioned to a livestream Sunday Mass.

Vatican II teaches that authentic liturgy requires “full and active” participation from the laity, and we have strived to find creative ways of doing that in a virtual format. Each Sunday, families record readings and prayers of the faithful on smartphones and then send them over to us via WhatsApp, where they’re fed live into the Mass broadcast. We use a similar technique to record choir members in their homes—guitars, drums, keyboards, singers, steel drums—all captured via smartphones as solos, then digitally assembled in editing software to create a virtual symphony. This way, even during lockdown a dozen or more parishioners are onscreen alongside the priest each Mass, leading us in worship.

If history is a guide, Mass attendance may not rebound any time soon.

Facebook’s livestream interface is designed to be interactive, and our parishioners exploit that feature liberally. As Mass begins, you’ll see lots of folks posting check-ins: “Maanin, St. Martins!” “Praying with you from Dangriga Town!”

They also type their responses to Mass parts (“And with your spirit”), and during the prayers of the faithful, the comments feed fills with prayer requests and messages of encouragement. It’s a way of parishioners keeping tabs on each other and offering help where it’s needed.

Even during the homilies—if the priest is doing his job well—we’ll get an “Amen, Fada J!” or “Preach, Fada!” in the comments.

Our virtual church is not limited to Mass. We have also produced virtual Stations of the Cross, Taizé prayer services, a Lenten parish retreat and a parish Novena. We’ve featured virtual liturgical Garifuna dances from our youth group and a virtual choir of our preschoolers. We aim to keep every service participatory and interactive.

We’ve discovered some ways in which virtual actually improves on the real thing.

One of my favorite experiments was our virtual Palm Sunday procession. Parishioners filmed video clips of their families marching in their yards and waving palm branches (readily available in every Belizean backyard!) while singing along to a lively Caribbean classic, “Enter into Jerusalem,” accompanied by choir, steel pan and Garifuna drums. Kriol, Mestizo, Garifuna, Maya and Indo-Caribbean faces sing and celebrate together, and from these we create a beautiful visual montage depicting our parish in a way we had never quite experienced it.

Though there are obvious ways in which virtual liturgy will never fully duplicate the in-person experience, we’ve discovered some ways in which virtual actually improves on the real thing. A parishioner showed me how she pipes Sunday Mass into a Zoom call so she can “attend” with a daughter living in a remote village hours from the city and with relatives in the diaspora (she has an aunt in Chicago and cousins in Los Angeles). Her extended family now has an opportunity to go to church together every Sunday in a way previously unimaginable. Belizeans in the diaspora have an opportunity for spiritual connection with home.

Our virtual church is not limited to Mass. We have also produced virtual Stations of the Cross, a Lenten parish retreat and a parish Novena.

In southern Belize, two Jesuit priests staff a parish that encompasses 35 Maya villages. Getting to them requires hours of travel on poor roads, which is why these Catholics get Mass once every few months if they’re lucky. But during the pandemic, they’ve had access to Mass as frequently as everyone else.

I heard from a 77-year-old woman from a fishing village in northern Belize, a several-hour boat ride from Belize City, that has never had a regular priest. She told me this is the first time in her life she’s been able to “attend” Mass every Sunday.

We’ve also had folks from well beyond Belize find our Mass on YouTube or Facebook. They’ve written to say they prefer the lively Belizean liturgy and engaging Jesuit preaching to the uninspired liturgies offered in their hometowns. One woman said she didn’t see herself returning to her home parish as frequently now that she had more nourishing online alternatives. Another said she hadn’t attended Mass in years—she had left after the abuse crisis when long-festering “issues” with the church reached a breaking point—but through a friend encountered our virtual Mass and has experienced a renewed connection with her childhood faith.

What Coronavirus Taught Us about Parish Life
Susan Bigelow Reynolds

We remember them: A virtual prayer service for all who died of Covid-19
America Media Events

When I hear a bishop or pastor insisting that we reopen the churches and reinstitute the Sunday obligation immediately lest the people of God never come back, what I mostly hear is fear. If history is a guide, attendance may not rebound any time soon. It didn’t after the medieval plagues nor 1918’s “Spanish flu,” and it certainly won’t happen because of a bishop ordering it. Christians and their pastors will have to get creative and not be afraid to take some risks.

I hope the pandemic will serve as something of a wake-up call. Catholics who experience their local parishes as morgues probably won’t be coming back. For my money, experimenting with virtual liturgies need not be a cause for despair but instead an invitation from the Lord to try something new. “Remember not the former things, nor consider the things of old. Behold, I am doing a new thing; now it springs forth, do you not perceive it?” (Is 43:18-19).