Pope Francis has increased leadership roles for women in the church. But there’s still work to do. 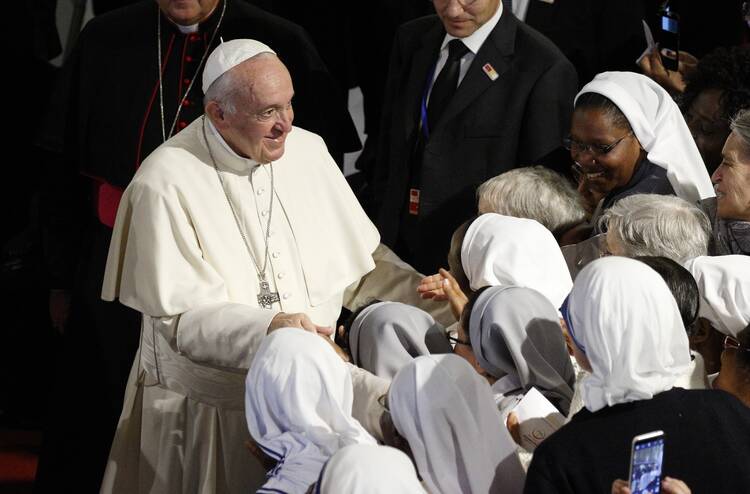 Pope Francis’ appointment of Sister Nathalie Becquart as one of two undersecretaries for the Vatican’s Synod of Bishops is a significant step in bringing more women into decision-making roles at the Vatican. While much progress still lies ahead, her appointment marks an inflection point for women’s leadership in the Catholic Church.

Hopefully, this will also help lead to greater inclusion of women in church decision-making more broadly. Sister Becquart has said that she hopes her appointment will be seen “in the field, in the dioceses, in the parishes” and will “encourage other bishops, priests, religious authorities, and that all this will include women more and more.”

While much progress still lies ahead, Sister Nathalie Becquart’s appointment marks an inflection point for women’s leadership in the Catholic Church.

It is hard to think of someone better suited for this role than Sister Becquart. A member of the Congregation of Xavières, she’s smart and experienced and has already held several key Vatican roles, including as a consulter to the general secretariat of the Synod of Bishops—itself a first. As Cardinal Grech notes, Sister Becquart “brings a theological depth of understanding of synodality, experience of working with youth for the Bishops’ Conference of France and Ignatian spirituality,” and as a religious woman, her presence opens up “possibilities for accompaniment and support that we can offer to the Church at local, national and regional levels—all of whom will be travelling with us on a synodal journey.”

Sister Becquart was deeply involved in both the Synod on Young People, Faith, and Vocational Discernment and the Synod for the Pan-Amazon Region. Her work has focused on evangelization of young people and on synodality, both key priorities of Pope Francis and central to the church’s mission in the years to come. Observers say that one of the reasons Sister Becquart was so effective at the 2018 Synod on Young People was that she spoke her mind, treated the young adult auditors as peers with something valuable to offer to the discussion and was widely accessible. In other words, she is an effective and engaging leader.

Pope Francis has called for greater roles for women in church leadership, noting in “Querida Amazonia” that “women have kept the Church alive...through their remarkable devotion and deep faith.” Among other actions, this January he modified canon law to open the lay ministries of lector and acolyte to women. He has also taken steps to increase women’s leadership at the Vatican, most recently with the appointment of six laywomen as members of the Council for the Economy, as well as numerous others in key roles in various Vatican bodies. Women play important staff roles throughout the Vatican as well, and Dr. Linda Ghisoni, Sister Veronica Openibo and Valentina Alazraki were powerful voices at the February 2019 Vatican meeting on the protection of minors in the church, strongly pushing for needed reforms in response to the global clergy abuse crisis.

Pope Francis has called for greater roles for women in church leadership, noting in “Querida Amazonia” that “women have kept the Church alive...through their remarkable devotion and deep faith.”

Women also exercise leadership throughout the broader church, from roles in families, parishes and schools to directing the work of major ministries. Here in the United States, in recent years Catholic Charities USA, Catholic Relief Services, the Catholic Health Association, the National Catholic Educational Association and Jesuit Refugee Service have all been led by women, and women have leading roles in dioceses large and small. Women lead many Catholic universities, and Catholic women scholars, journalists, activists and advocates are leaders in their fields. Women religious have long been models of living out the Gospel call to serve those “lying wounded by the roadside,” and we should all be humbled by and grateful for their work.

All of this stands as real progress in an institution that spans the globe and measures time in centuries. In my limited and positive experience serving as a member of the Dicastery for Communication and in other roles, I have learned that Pope Francis is committed to including women and that bringing more women into leadership roles in Rome and throughout the church would be both a sign of and a way of bringing about needed reforms. There can be no doubt that there is much more work to be done. The fact that we are having this discussion at all stands out: In 2021, women’s widespread participation in professional life in many cultures is commonplace, and it should be commonplace in our church.

There is no simple answer here, but at a minimum, young women need to know that their gifts are respected and valued, and that means seeing more Catholic women in leadership roles.

More women like Sister Becquart in leadership roles would strengthen church decision-making, and moving this effort forward is an urgent issue. The clergy abuse crisis stands as exhibit A here: Had more women been in the rooms where decisions were made about abusive clerics, we would not be where we are today. U.S. bishops can take further concrete steps toward engaging the gifts of laywomen as one way to help overcome the clericalism that has too often characterized our church.

Increasing the number of women in leadership roles in the church is also key to evangelization and mission. According to a 2017 study by Georgetown’s Center for Applied Research in the Apostolate, only 17 percent of millennial women in the United States attend Mass weekly—and who knows where that number will be after Covid-19. This presents an urgent challenge, particularly since women are so often the lifeblood of parishes and those who most often transmit the faith to the next generation. There is no simple answer here, but at a minimum, young women need to know that their gifts are respected and valued, and that means seeing more Catholic women in leadership roles.

Sister Becquart has said that the Synod of Bishops “is a tool of the reform of the church. It’s a school of conversion, transformation.” Such reform is key to more effective decision-making and key to effective witness. Pope Francis’ appointment of Sister Becquart as an undersecretary in the synod is a crucial step in this direction. Let’s hope for more such steps from leaders throughout the church. 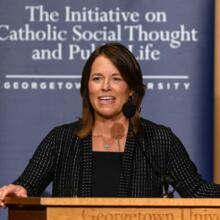 Kim Daniels is the co-director of Georgetown’s Initiative on Catholic Social Thought and Public Life and a member of the Vatican Dicastery for Communication.

@KDaniels8
Show Comments ()
Join the conversation: Login or create an account
Before you can comment, you need to update your profile to include your first and last name, as required in our comments policy. Then reload this page and you'll be set up for commenting. Update your profile