For the first time, Pope Francis appoints a woman with the right to vote as undersecretary of the synod of bishops 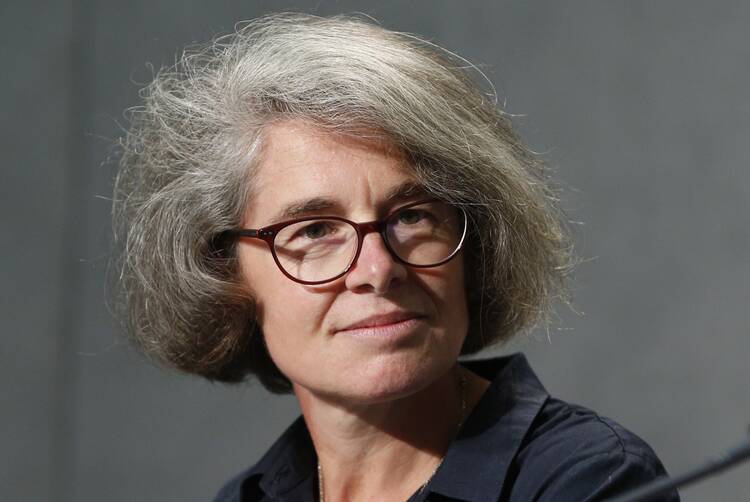 Breaking with tradition and opening a new door in the synodal process, Pope Francis has appointed a woman, Nathalie Becquart, a member of the Xavière Sisters, Missionaries of Jesus Christ, in France, as one of two new undersecretaries of the synod of bishops. As such, she will have the right to vote in the synod. It is the first time this right has been given to a woman in the synod and raises the prospect that the right could be extended to other women participants at future synods.

Some have questioned whether Sister Nathalie will have the right to vote in the synod, but sources contacted by America point to two reasons for confirming this. First, the apostolic constitution “Episcopalis Communio,” promulgated by Pope Francis on Sept. 15, 2018, states, “The General Secretary and the Undersecretary are appointed by the Roman Pontiff and are members of the Synod Assembly” (Art. 22, No. 3). The members have the right to vote. Second, in an interview with Vatican News, Cardinal Mario Grech, the secretary general of the synod, speaks in Italian of her “possibilità di partecipare con diritto di voto,” which properly translated to English means “she can participate with the right to vote.”

As the other undersecretary of the synod, Pope Francis appointed a Spanish priest, Luis Marín de San Martín, O.S.A., the assistant general of the Augustinian order, and nominated him bishop.

Pope Francis’ nomination of Sister Nathalie to this position is another affirmation of his determination to appoint women to senior positions in the Vatican that do not require priestly ordination. Commenting on this appointment, Cardinal Grech recalled that “during the last synods numerous synodal fathers emphasized the need that the entire Church reflect on the place and role of women within the Church.” He said Pope Francis has frequently “highlighted the importance that women be more involved in the processes of discernment and decision making in the Church” and has increased the number of women participating as experts or auditors in the synods.

Breaking with tradition and opening a new door in the synodal process, Pope Francis has appointed a woman, Sister Nathalie Becquart, as one of two new undersecretaries of the synod of bishops.

Significantly, Cardinal Grech said: “With the appointment of Sr Nathalie Becquart, and the possibility that she can participate with the right to vote, a door has been open. We will then see what other steps could be taken in the future.” This suggests that the possibility of giving women a vote in future synods is under consideration. It is something that has been requested for some time, including by several cardinals, bishops and other synod participants.

Cardinal Grech added, “The appointment of Sr Nathalie Becquart as Under-secretary will thus help us to remember in a concrete way that on this synodal way the voice of the People of God has a specific place and that it is fundamental to find ways to encourage the effective participation of all the baptized along this way.”

“This perspective has characterized the way in which Pope Francis has interpreted the Synod in his entire pontificate,” he said.

Commenting on the appointment of Father Luis Marín de San Martín, the cardinal said, “He has a vast experience in accompanying communities in decision-making processes and his knowledge of the Second Vatican Council will be precious so that the roots of the synodal way remain always present.”

“With the appointment of Sr Nathalie Becquart, and the possibility that she will participate with the right to vote, a door has been open. We will then see what other steps could be taken in the future.”

“The fact that both under-secretaries are religious, each one having matured in a specific spirituality, says how important it is that the synodal Church take into consideration the various charisms present in the Church as well,” Cardinal Grech said. In addition, he said, “these appointments highlight the importance that the journey of a synodal Church be accompanied by a group that works together: the structure and the way the General Secretariat works must itself be synodal! Working together as a team allows the laity greater participation within the dynamics of responsibility.”

The cardinal drew attention to the fact that “synodality” is the theme for the next synod of bishops, which will be held in October 2022.

Both new appointees have impressive curriculum vitae as outlined by Vatican Media.

Sister Becquart was born in 1969 in Fontainebleau, France. She gained a master’s degree in management at HEC Paris, studied philosophy and theology at the Centre Sévres of Paris and sociology at the School for Advanced Studies in the Social Sciences (EHESS) and specialized in ecclesiology at Boston College, with research on synodality. While working as a volunteer teacher in Beirut, Lebanon, she took philosophy and theology courses at St. Joseph Jesuit University. After working as a consultant in a marketing and advertising agency for nongovernmental orgnanizations and Christian groups in Paris, in 1995 she joined the Xavières sisters, a religious congregation with roots in Ignatian spirituality.

Since then, she has worked in a variety of roles including spiritual director for the Ignatian Youth Network in France, national coordinator of a French scouting program for youth in poor urban areas and director of the National Service for the Evangelization of Youth and for Vocations at the French Episcopal Conference from September 2012 to August 2018. She served as part of the preparatory team for the synod on youth and was an auditor at that synod. Since then, she has been following Vatican sabbatical programs at Catholic Theological Union, Chicago.

Bishop-elect Marín de San Martín was born in Madrid, Spain, 1961. He joined the Order of Saint Augustine in 1982 and after studying philosophy and theology in the Seminario Mayor Tagaste in Madrid was ordained a priest in 1988. He gained a license in spiritual theology and a doctorate in theology, with a thesis on the ecclesiology of St. John XXIII, from Comillas University, Madrid. He also obtained a license in dogmatic theology from the Gregorian University in Rome. He did parish ministry for several years, served as the director of Augustinian theological studies at Tagaste (1995–99) and as a provincial counselor for the Augustinian Province of Spain. From 2009 to 2013, he was secretary of the Augustinian Historical Institute. Since 2004, he has been teaching in the theology faculty of the Norte de España. Since 2008, he has served as general archivist of the Order of Saint Augustine and as an assistant general of the Augustinian Order and president of the Augustinian Spirituality Institute since 2013.