Journalist at abuse summit: The press is not the enemy of the church 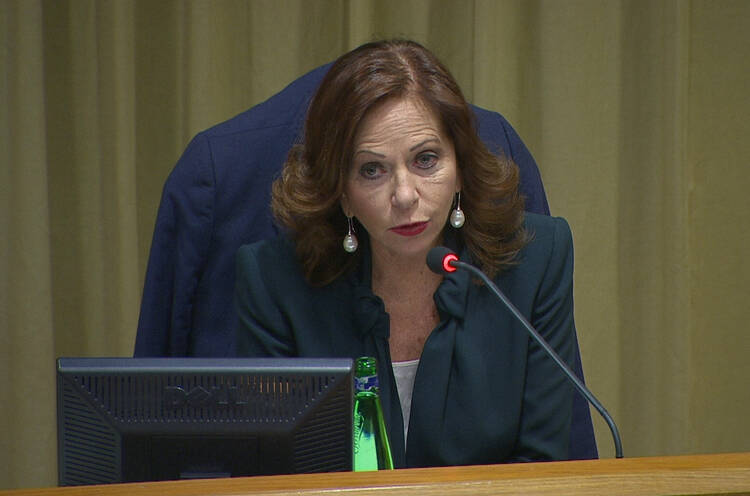 Television reporter Valentina Alazraki of Televisa speaks during a meeting on the protection of minors in the church at the Vatican Feb. 23, 2019, in this image taken from Vatican television. (CNS photo/Vatican Television)

“I think you should know that the more you cover up, the more you play the ostrich, fail to inform the mass media and thus the faithful and public opinion, the greater the scandal will be.”

That is what Valentina Alazraki, a Mexican television reporter, told the 190 patriarchs, cardinals, bishops, heads of women and men’s religious orders and senior officials of the Roman Curia attending the Vatican summit on the protection of minors on Feb. 23.

She had been invited to speak at the summit on the third and final working day about communication and, in particular, “about how transparent communication is indispensable to fight the sexual abuse of minors by men of the church” because she knows the Vatican well.

For the past 45 years, Ms. Alazraki, a mother of two, has reported on the Vatican, from the end of the pontificate of Paul VI right up to the present day, and has accompanied the last three popes on 150 foreign journeys. She is well known by Pope Francis, who was present as she spoke with the boldness (parrhesia) that he often encourages.

“I think you should know that the more you cover up, the more you play the ostrich...the greater the scandal will be.”

“In these four decades, I have seen it all,” she said referring to the major events and the scandals that have rocked the Vatican. “How many times have I heard that the scandal of abuse is ‘the fault of the press,’ that it is a plot by certain media outlets to discredit the church, that there are hidden powers backing it in order to put an end to this institution.”

While acknowledging that some reporters are “more thorough” than others and that some media outlets are “more or less dependent on political, ideological or economic interests,” she told them, “I believe in no case can the mass media be blamed for having uncovered or reported on the abuse.” Ms. Alazraki reminded them that abuse against minors “are neither rumors nor gossip: They are crimes,” and she recalled that Benedict XVI said “the greatest persecution of the church comes not from external enemies but arises from sins within the church.”

Speaking as a journalist, a lay woman and a mother, she told them that “we think abusing a minor is as contemptible as is covering up the abuse.” Moreover, “communicating is a fundamental duty because if you fail to do so, you automatically become complicit with the abusers.”

“How many times have I heard that the scandal of abuse is ‘the fault of the press.’”

She told them frankly: “The faithful do not forgive the lack of transparency because it is a new assault on the victims. Those who fail to inform encourage a climate of suspicion and incite anger and hatred against the institution.” She recalled that she had seen this happen when Pope Francis visited Chile last year.

Ms. Alazaraki, who is the dean of the press corps accredited to the Vatican, told them, “I think it would be healthier, more positive and more helpful if the church were the first to provide information, in a proactive and not reactive way, as normally happens.”

“In the age we live in,” she reminded them, “it is very difficult to hide a secret. With the prominence of social networks, the ease of posting photos, audio and video, and the rapid social and cultural changes, the church has only one path: to concentrate on awareness and transparency, which go hand in hand.”

She urged bishops, religious superiors and the Vatican to “report things when you know them. Of course, it will not be pleasant, but it is the only way, if you want us to believe you when you say, ‘From now on we will no longer tolerate cover-ups.’”

“The first to benefit from transparency is the institution,” she said, “because the focus is on the guilty party.”

Ms. Alazraki went on to recall the terrible scandal of Marcial Maciel, the Mexican founder of the Legion of Christ, which as a journalist she had covered in depth. She said, “For me this is the most emblematic case of unhealthy, corrupt communication, from which various lessons can and must be learned.”

“The faithful do not forgive the lack of transparency because it is a new assault on the victims.”

Drawing on what she has seen in that case, she told them that “behind the silence, the lack of healthy, transparent communication, quite often there is not only the fear of scandal, concern for the institution’s good name, but also money, compensation, gifts, construction permits for schools and universities perhaps in areas where construction was not permitted.” She recalled that Pope Francis often says “‘the devil enters through the pockets,’ and he is absolutely right.”

Ms. Alzaraki reminded them that secrecy is “strictly tied to the abuse of power: It is a safety net for those who abuse power.”

She next offered three “practical tips for living transparency.” First, she said, “put the victims in first place.” As part of this, she encouraged them to meet victims regularly as Pope Francis does.

Second, she said, “let yourselves seek advice. Before making decisions, seek advice from people with sound judgment who can help you,” and among these advisors “there should always be communicators.” She emphasized that especially today the church needs advisors in communication and should heed them when they say “it is always better to inform than to keep silent or even lie.”

Cardinal Marx: the Catholic Church must be transparent in its handling of sexual abuse
Gerard O’Connell

“It is an illusion to think that a scandal can be hidden today,” she said. “Silence is far more costly than facing reality and making it public.”

Third, she recommended that they “professionalize” their communications. She told them that in today’s world “the response cannot be silence or ‘no comment’ because [reporters] will seek answers by asking others, and thus it will be third parties informing people in the way they wish to do.” Moreover, she said, “if information is not given in a timely manner, the response is no longer of interest; it will be too late and others will do so, perhaps incorrectly.” She assured them that “investing in communication...is a long term investment.”

Ms. Alzaraki concluded her talk by reminding these top-ranking church leaders that “we are at the threshold of another scandal, that of nuns and women religious as victims of sexual abuse by priests and bishops.” And by way of friendly advice she told them, “I would like that on this occasion the church play offense and not defense, as has happened in the case of the abuse of minors.” Indeed, she said, “it could be a great opportunity for the church to take the initiative and be on the forefront of denouncing these abuses, which are not only sexual but also abuses of power.”

She bade them farewell by telling them, “I hope that after this meeting you will return home and not avoid [the press] but instead seek us out. And that you will return to your diocese thinking we are not vicious wolves but, on the contrary, that we can join our forces against the real wolves.”

The faithful do not forgive the Church because keeping a grudge feels good. Nobody wants the simple peace found in forgiving others. Just ask people on both sides of the issus of gay, female and married ordination or the pope v protestant debate or on filioque. Or Trumpism.

In 1966 the great German theologian Karl Rahner, SJ, in a lecture in Freiburg presented some reflections which seem appropriate in relation to today’s moral crisis in the Church.
“Tomorrow’s priest will not have power drawn from the social power of the Church, but will have the courage to do without that power” (p. 113).

“The priesthood will become less and less a social factor that is taken for granted; it will have to be exercised more and more in the diaspora of unbelief, of the Church’s social insignificance, of the world’s incomprehension of God. And it is certainly a question whether a great deal more of the social status which the priest still has today will not have to be lost….

“The Constantinian age is ending not only for the Church as a whole but also for every priest in particular. He no longer carries out his mission from a little ecclesiastical State, he is no longer a village pope, he no longer figures automatically among the notables; social privilege and social prestige are slipping away. By degrees he is becoming no more than he is meant to be – the man who is God’s, homo religiosus, who believes, hopes, loves” (pp. 114-15).

This material is taken from the book, SERVANTS OF THE LORD, by Karl Rahner (New York: Herder and Herder, 1968).