Vincent Rougeau named president of the College of the Holy Cross 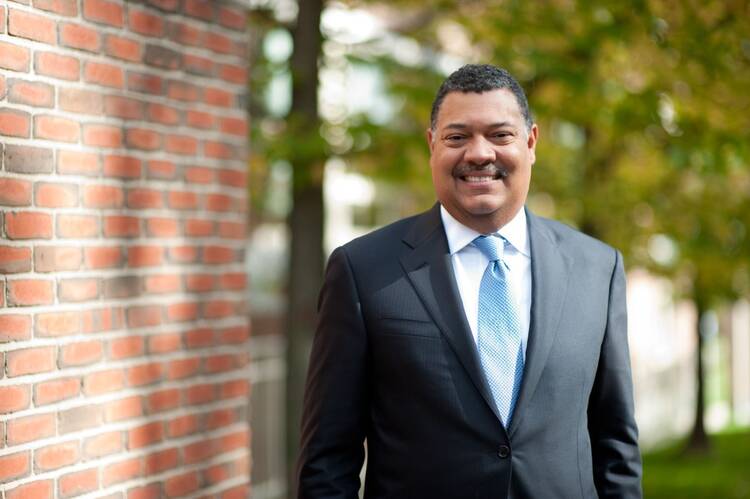 On July 1, Vincent Rougeau, the dean of Boston College Law School, will become the next president of the College of the Holy Cross in Worcester, Mass. He will succeed Philip L. Boroughs, S.J., who has served as the president of Holy Cross since 2012.

"Vince’s demonstrated leadership, commitment to the liberal arts, and deep embrace of Jesuit, Catholic higher education distinguished him from a diverse and highly qualified pool of candidates after a thorough national search process," said Rick Patterson, the chair of Holy Cross' Board of Trustees. "We are excited to welcome him to Holy Cross, and look forward to his leadership in furthering our mission and building on the College’s success."

“Since he arrived at Boston College a decade ago, Vince Rougeau's leadership at the Law School and across campus has been extraordinary,” said Boston College’s Provost David Quigley. “He has hired a strong cohort of faculty colleagues and encouraged far greater engagement with the University's other schools and centers, all while advancing a powerful vision for the contemporary importance of our mission. Vince is recognized as a national leader in legal education and will surely be a great college president.”

On July 1, Vincent Rougeau, the dean of Boston College Law School, will become the next president of the College of the Holy Cross in Worcester, Mass.

Mr. Rougeau will be the second African-American layperson to serve as the president of a Jesuit college or university.

Mr. Rougeau’s Catholic bona fides are also well known. He authored the book Christians in the American Empire: Faith and Citizenship in the New World Order, in which he critiqued the idea of America as a Christian nation and challenged the assumption that the country’s fundamental nature as a capitalist country is compatible with Christian theology.

Recently, Mr. Rougeau wrote an article for America arguing for politicians to pay attention to the words of Pope Francis and “build a different kind of politics that requires elected politicians to adopt a humbler and more responsive pose.” He also published a piece on the work of Boston College’s Forum on Racial Justice, of which he is an inaugural director.

“It has been an honor for me to be the dean of BC Law for the past ten years,” Mr. Rougeau said. “Although I am taking on a new role at a new institution, I am not going very far away and I will be leading a college that shares the same Jesuit heritage that guides and animates us at BC Law: formative education of the whole person, a commitment to ethical and personal discernment, and passion for service to others, particularly those least fortunate.”

In addition to his position as dean of Boston College Law School, Mr. Rougeau also serves as the president of the American Association of Law Schools, as well as a senior fellow at the Centre for Theology and Community in London.

“Vince Rougeau has been a well-liked and respected leader of BC Law as well as a much-appreciated member of the Boston College community for the past decade,” said Boston College’s president, William P. Leahy, S.J. “I wish him the very best in his new role as president of the College of the Holy Cross.”

“[Boston College Law School] is one of the nation’s outstanding law schools, and that is obvious based on many objective measures⁠—the impressive faculty, the outstanding students, the extraordinary staff, and the accomplished alumni,” Mr. Rougeau said. “But what has always been distinctive about BC Law is the community. Over years and generations, BC Law has built a community of people who care deeply for one another and who are committed to the highest standards of professionalism and academic excellence. I have been so very proud to be a part of this community and to serve as its leader.”