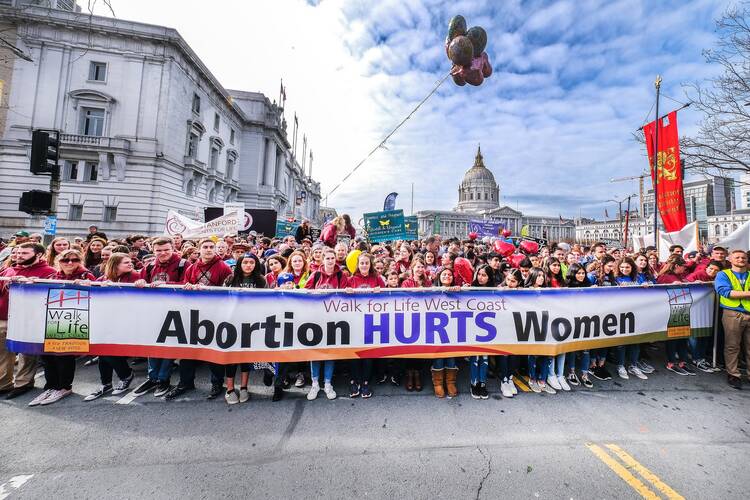 A global pandemic cannot stop pro-life advocates from marking the anniversary of Roe v. Wade. But the annual events certainly will look different this year.

In San Francisco, the annual Walk for Life West Coast will forgo the usual rally, which normally features pro-life speakers on a soundstage. Still, participants will walk down Market Street at noon on Jan. 23, following a 10:30 a.m. Mass celebrated by Archbishop Salvatore Cordileone of San Francisco.

“As is the case with everyone, everything is different this year,” Eva Muntean, Walk for Life organizer and co-founder, said in an email to America. She noted that the city is not giving permits for events.

“The Biden/Harris pro-abortion agenda will of course motivate and energize pro-lifers, and we anticipate their actions will convince more folks who are ‘on the fence’ to realize that that agenda must be opposed.”

“The walk will proceed as an expression of our First Amendment rights, under the same rules that allow protests,” Ms. Muntean said. “Not only will the walk be smaller, but every year there are lots of associated events, prayer vigils, special Masses, events for the young people who come from all over the Western U.S., which made the walk weekend one of the most Catholic weekends of the year. Most of those won’t be happening, or happening virtually.”

On Jan. 22, the anniversary of Roe v. Wade, the Supreme Court decision that legalized abortion, Archbishop Cordilione will celebrate a livestreamed Mass for the legal protection of unborn children at St. Mary’s Cathedral. He will also lead a webinar that day with other pro-life leaders to “reflect on the accomplishments and challenges facing the pro-life movement.” The Dominican Friars will also livestream Vespers and Mass that day at St. Dominic Church.

Last year, Donald J. Trump became the first sitting U.S. president to address the annual March for Life event in Washington, D.C. This year, Ms. Muntean said, “the Biden/Harris pro-abortion agenda will of course motivate and energize pro-lifers, and we anticipate their actions will convince more folks who are ‘on the fence’ to realize that that agenda must be opposed.”

The pandemic, she said, does not change the central message of the Walk for Life, which began in 2005. It only “influences our means of disseminating that message.”

“There’s more to being pro-life than abortion and assisted suicide. We want to keep our families safe. We didn’t think it was worth the risk. Life is precious.”

The message is “that there has never been a more important time to stand up for those who can’t stand for themselves, to speak out for those who cannot speak for themselves and to be there for women and families who have been hurt by abortion,” Ms. Muntean said. “The hallmark of the Walk for Life West Coast from day one is that it has been a beacon of hope and love. Hope is greater than knowledge. Hope is our way of reaching toward the Kingdom of God and bringing new realities into being. Every child allowed to be born is an act of hope!”

In Los Angeles, the annual OneLife LA event, now in its seventh year, will be virtual. That choice in itself reflects a broader commitment to the pro-life movement, said Kathleen Domingo, senior director of the Office of Life, Justice and Peace for the Archdiocese of Los Angeles.

“There’s more to being pro-life than abortion and assisted suicide,” she said. “We want to keep our families safe. We didn’t think it was worth the risk. Life is precious.”

Contrary to what some may believe, the event is not a political protest, she said, but a celebration “to thank God for the gift of life.” Typically, the event concludes with a fiesta, including food trucks and a salsa band.

Contrary to what some may believe, the event is not a political protest, Kathleen Domingo said, but a celebration “to thank God for the gift of life.”

“Some of our speakers have overcome special needs, some used to be in gangs,” Ms. Domingo said. “The pattern that runs through is when they were at their time of need, someone reached out and recognized their dignity.”

Along with Archbishop José H. Gomez of Los Angeles, this year’s speakers include Noemi Amezcua, a parent who has adopted three children and fostered several others; Sarah Wilson, who served at-risk women and children; and Gloria Purvis, a leading Catholic voice on racial justice and the pro-life movement. (The full list of speakers is available on the OneLife LA website.)

The pro-life movement must make it clear: Donald Trump does not represent us.
Xavier Bisits

In addition to the speakers, Ms. Domingo explained that OneLife LA also connects participants with organizations that serve those in need. This year, that includes Hearts to Serve, a joint effort led by the Archdiocese of Los Angeles, the Knights of Columbus and St. Vincent de Paul to help those facing hardships because of the Covid-19 pandemic.

Ms. Domingo, who recently took part in a Georgetown discussion on faith in a time of crisis, is also mindful of the incoming Biden administration’s position on abortion and conscience protection.

“It’s important for people to remember that abortion has been politicized. But it’s not a partisan issue. It’s a human issue and involves real people,” she said. “We try to humanize the issue at OneLife LA. Voting is a piece of it. But it’s not the end. The end is sharing the love of Christ.”