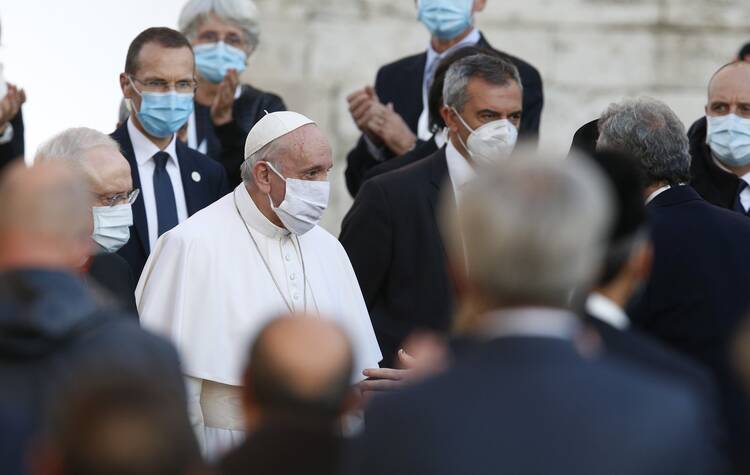 Pope Francis was tested for Covid-19 on Monday, Dec. 21, and received a negative result, the Italian news agency ANSA reported today, saying it got the information from Vatican sources.

The pope underwent the test after Cardinal Konrad Krajewski, 57, the pope’s almoner, tested positive after showing some symptoms of coronavirus that same Monday morning. A medical check showed that the cardinal had initial signs of pneumonia, and he was taken to the Gemelli Hospital in Rome, where he is being treated.

Vatican sources told America that Pope Francis, who celebrated his 84th birthday on Dec. 17, and the Polish-born cardinal were seen speaking together for a minute or so last Friday, Dec. 18, in the chapel of the apostolic palace, before listening to the Advent homily given by the preacher of the papal household, Cardinal Raniero Cantalamessa. Significantly, however, both the pope and the cardinal were wearing masks when they spoke that morning, thereby greatly reducing the risk of infection.

A second cardinal, the Italian-born Giuseppe Bertello, 78, president of the governorate of the Vatican City State, also tested positive for Covid-19, but a source told America that his condition was less severe than Cardinal Krajewski’s. He was asked to isolate in his apartment and has not been hospitalized. There is no evidence that he had been in close contact with the pope in recent days.

A Vatican source told America that all those who had been in contact with the two cardinals in recent days have been identified and tested for Covid-19 by Vatican health officials and that all results were negative.