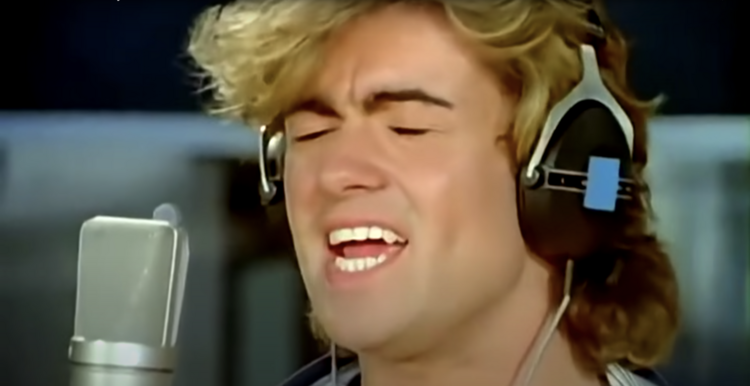 George Michael, Band Aid's "Do They Know It's Christmas?" (YouTube)

The last choral notes drifted away like the snow that fell reluctantly outside on Blondo Street. Oh the poor starving Africans! The six of us looking at each other like, are you kidding me? And the glorious European pop stars to the rescue! They really wrote songs like that. No matter how many times you hear it: unbelievable.

“We sang that song in eighth grade,” a voice said. We whirled around. All of us, at once, whirled.

Stepping out from the shadows, an old Irishman with a creased face and a dark black peacoat, in about his late 40’s. “We had to bring a record player into the church,” he said. “It was a breakthrough moment in the history of Christmas concerts at St. Pete-bogs , and no one ever forgot it.”

An Irishman. A novelty act. We let him go on.

“But you’ve got issues with the song. It’s always issues with your lot. For instance himself Mr. Bono’s Well tonight thank God it’s them instead of you. How terrible! Thanking the Lord for other people’s suffering!”

“And then Band-Aid’s mourning there won’t be snow in Africa. Very problematic. Everything’s problematic with you all, too. Because maybe Africans wouldn’t even want snow over there, right?”

“Mr. Bono’s Well tonight thank God it’s them instead of you. How terrible! Thanking the Lord for other people’s suffering!”

Before we could respond: “And the very title of the song, ‘Do They Know It’s Christmas.’ We thinking these poor Africans just because they’re all hungry and dwelling in sand are unable to read a calendar let alone count to 25 and thus are totally in the dark about it being Christmas. It’s othering the Africans to think that. Everything’s othering with you all, isn’t it?

It was a legitimately disheartening bar we were in. Hands plunged into thin leather coats, we went there to feel better about ourselves, to have one up on something. Even if it was just a bar. Our late twenties had not exactly turned out to be the promised land.

Before we could respond: “But perhaps my lads and lassies, we consider that Mr. Bono himself is being sarcastic about ‘thanking God’ other people are starving and not us. Sarcasm. Are ye unable to catch it when it’s happening?”

We were all silent, unsure if he was being sarcastic. Outside it had stopped snowing, as if the sky itself had quit what it was doing to listen in.

“As for the song title and the grievous lack of snow in Africa,” he said, “consider your standard socialist take on these issues. And you lot are all devout socialists, I assume?”

We considered this for a moment and then nods all around.

“So you know that ye olde Christmas cheer is owned by the bourgeois propertied class whose finely tuned economy dispenses from a colander with holes too small for a mouse to pee in Christmas gifts and generosity and not starvingness. So indeed it is an open question within bridle-free capitalism, wherein Christmas is essentially a collateralized debt obligation and snow a glinty metaphor for the material wealth December 25th supposedly bestows upon the 99 percent but doesn’t, it is an open question whether in fact the people of the Sub-Sahara do not know it’s Christmastime at all and indeed are completely flackered they have no snow.”

We stared at him with reluctant awe. He took off his Irishman’s brown driving cap and slapped it on his knee to get the dust off, and there was no dust.

“So given all of this and other lyrics whose supposedly troubling nature we could readily defuse, consider, do, the somber clangs at the outset of this crushing holiday ode and Mr. Young, Paul, quietly telling us It’s Christmas time, there’s no need to be afraid and then throwing to Mr. George, Boy, who declaims with a ghostly precious voice rising like purple mascara fog into the half sunlight And in our world of plenty, we can spread a smile of joy, throw your arms around the world...at Christmas time.”

“And Mr. Collins, Phil, starting on the drums for Mr. Michael, George, who alongside a thrumming bass, gently but firmly transitions us into the shaming part of the whole thing, But say a prayer, pray for the other ones, at Christmas time, when you’re having fun. And then handing off the lyric to some other fellow who looks like Mr. George, but not as drop-dead you know, Because there’s a world outside your window, and it’s a world of dread and fear."

“Consider all of this and then imagine”—a sharp gust of wind blew outside, like a fierce assent to all that had been said—”imagine them Band-Aid fellas not only singing in 1984 for all guilty Nordic types around the world but also floating above, stay with me here, floating above the wretched stable of 2,000 years ago where the wee spitting image of the Lord is taking rest in a disgusting mound of wet hay looking at all these beasts hanging over him and rank shepherds and vagrant kings and one tatty unrhythmic little drum cutting through it all and wondering, what the deuce did I come down here for?”

“The wee spitting image of the Lord is taking rest in a disgusting mound of wet hay...wondering, what the deuce did I come down here for?”

“And then maybe thinking ahead a bit, because he can do that you know, to what’s in store for him.”

“But hearing nevertheless these shimmery voices, the Lord, and perhaps seeing even a shadow of the tufted layers of Mr. Michael’s golden locks as he’s up there singing about prayers for the other ones and too the sound of Mr. Boy re-entering the song a few moments later with an unearthly Ohhhh and the Lord thinking, maybe I’m the other one they’re praying for, maybe that heart-wrenching Ohhhh is for me.”

“So but this song whenever it’s played and no matter your unwavering magisterial judgment on it is helping our tiny Lord just plunked down into the brutish world make it through another and another and yet again one more miserable second of life in his cow-infested maternity ward.”

The wet glaze on our plastic cups, the bar’s faint chill, the old man’s voice and nothing else.

“And maybe it’s not only that he’s being born there in that manger but the Lord’s being born over and over, in, I don’t know, whoever’s starving today or glad or twined up in Human Studies-major debt or hopeful or lonely or sheer just wondering what’s the point of it all and why even go on.

“He’s bursting up right there, and ‘Do They Know’ is always playing, and him nestled into that unearthly Ohhhh, one precious note covering Christ for all eternity wherever he is, and Christ himself repaying the favor, sheltering forever all of us.”

He stopped. The bar had grown deathly still. A few candles flickered, a few snowflakes held in the trees. We stood there, unsure what to do next, pondering these things, wanting him maybe to say more.