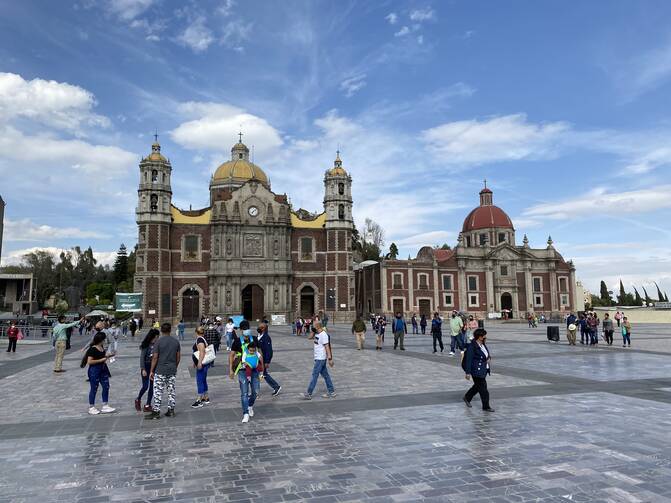 The usually bustling main plaza before the Basilica of Our Lady of Guadalupe. Photo by Jan-Albert Hootsen.

“Don’t get me wrong, it does make me feel bad,” said Noé Macías, a hint of disappointment in his voice. “I travel to the Basilica of Guadalupe every year. The pilgrimage means a lot to me, but if the government tells us we can’t do it, we have to stick by the rules.”

Any other year on Dec. 12, Mr. Macías, a 60-year-old construction worker from Apizaco in the central Mexican state of Tlaxcala, would have been one of millions of pilgrims to visit Mexico City and the Basilica of Our Lady of Guadalupe, which hugs the slopes of Tepeyac Hill in northern Mexico City, for the Virgin’s feast day.

But 2020 is not a normal year. Mexico is one the countries hardest hit by the Covid-19 pandemic; the virus has caused officially at least 110,000 deaths here (some believe the toll is much higher, closer to 140,000), the fourth highest in the world, and coronavirus cases are escalating. Under such circumstances, the massive “Guadalupana,” as the annual celebration of the Day of the Virgin of Guadalupe is commonly known, would be a potential public health catastrophe.

The Archdiocese of Mexico City decided not to wait for that to happen. On Nov. 23, the Mexican Episcopal Conference announced in a statement that the basilica will be closed between Dec. 10 and Dec. 13. The decision was made jointly with Mexico City authorities. (Observances of Guadalupana in the United States are similarly being curtailed or canceled this year because of the pandemic.)

The massive “Guadalupana,” as the annual celebration of the Day of the Virgin of Guadalupe is commonly known, would be a potential public health catastrophe.

“Our common concern is the health and life of the faithful,” Cardinal Carlos Aguiar Retes, the archbishop of Mexico City, said. “St. Mary of Guadalupe stands for life, which is why we go to her. The Virgin will now come to our houses, instead of expecting us in her house.”

Like so many religious observances and celebrations across the globe, the Guadalupana will move online. The bishops’ conference urged pilgrims to set up shrines at home and hold smaller gatherings in their own communities and parishes. They will be able to follow the annual Mass online and on television.

The Basilica of Our Lady of Guadalupe is the second most visited Catholic site in the world, only behind St. Peter’s Basilica in Rome. The yearly Guadalupana is by far the most important religious event in Latin America. Last year alone, more than 10 million pilgrims flocked to the capital to commemorate the appearance of the Virgin Mary to San Juan Diego, an indigenous farmer, in 1531.

It will be the first time in almost a century that the annual pilgrimage will not be held. The last time the celebration was canceled was in 1927, when the then revolutionary and anti-clerical government of Mexico closed all churches in the country.

Mr. Macías has been a pilgrim his entire life. He and his family not only visit the Basilica of Guadalupa, but participate in other pilgrimages to places such as Oaxaca as well, often walking long distances carrying images of the Virgin. He told America that physical participation in a pilgrimage is an important part of his Catholic faith. “It will be difficult and a bit strange to do it at home,” he said. “It’s not the same.”

The Basilica of Our Lady of Guadalupe is the second most visited Catholic site in the world, only behind St. Peter’s Basilica in Rome.

For many Mexican Catholics, the Guadalupana is the most important spiritual event of the year. Celebrating the appearance of the Virgin to Juan Diego is both a symbol of their faith and of their Mexican identity.

“To us, she is the mother,” Mr. Macías told America. “The pilgrimage is very important to us, it’s central to our faith. Not being able to celebrate the Guadalupana is a loss to us.”

According to Francisco Rodríguez Labastida, a spokesperson for the archdiocese, the church still hoped in September and early October that a Guadalupana could be held. He pointed out that the number of Covid-19 hospitalizations seemed to be heading down in early autumn.

“Early last month, however, we began to receive reports that the infection rate was going up again and that a new peak was coming,” he told America. “Ultimately we decided that it would be best to close the basilica.”

Even before the yearly celebrations were canceled, access to the basilica had been limited. Last week, only a few hundred pilgrims could be found at main plaza. The two principal church buildings on the ground were already closed, and many kneeled and prayed at the entrance instead.

Eduardo Aguilar, holding a plastic statuette of the Virgin of Guadalupe, said he was disappointed to learn that the Guadaluapana would not take place at the basilica this year. “For us it’s more than just a symbol of our faith,” he said. “The Virgin takes centerstage in our lives as Mexican Catholics.”

“To us, she is the mother. The pilgrimage is very important to us, it’s central to our faith. Not being able to celebrate the Guadalupana is a loss to us.”

Still, he supports the archdiocese’s move. “I think it was a good decision to cancel, given the situation.” He added, “As long as one believes, you can celebrate at home.”

Pilgrims are not the only ones disappointed, of course, by the cancellation of the great celebration. To the dozens of shopkeepers near the basilica, hawking candles, rosaries and other religious items, an all-digital Guadalupana spells commercial disaster.

Día de los Muertos is a celebration—even during a pandemic.
J.D. Long-García

Juana López is one of them. She runs a little store in one of the buildings facing the main entrance of the basilica. The facade of her building is obscured behind a large sign that says “Welcome, Pilgrim,” but last week few pilgrims were browsing through her shop.

“For us, they’re the most important days of the year, so the cancellation means that things will be difficult,” Ms. López said. “It’s already been a difficult year for us. We’re currently having perhaps only a third of the business we’d normally have.

“The pilgrims buy all kinds of things here,” she said. “They buy rosaries, wristbands, religious images.

“For us the blow strikes extra hard. We had to close for four months when the coronavirus epidemic started, and now we also have to deal with this,” Ms. López said. “Some of the families running the stalls here will have to look for other means of income because we’ll end up without money.”

According to the archdiocese, the situation for the vendors is a matter for the government of Mexico City to respond to. “But we understand that this is a sad and dramatic situation for them as well,” Mr. Rodríguez said.

—10 things to know about the Virgin of Guadalupe
—Guadalupe’s Legacy: How a 486-year-old vision of Mary in Mexico continues to influence the church
—Pope Francis proclaims a year dedicated to St. Joseph

More: International / Mexico / Coronavirus / Faith in the time of Coronavirus