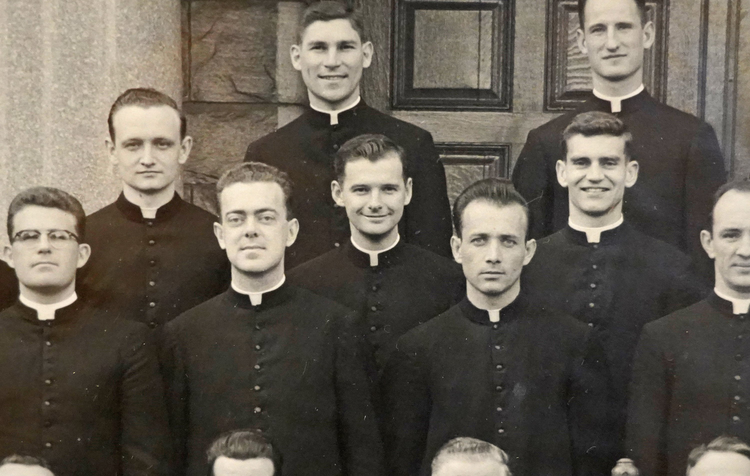 Theodore E. McCarrick, middle row center, is seen with fellow seminarians in a close-up of the official portrait of the class of 1958 of St. Joseph's Seminary in Yonkers, N.Y. (CNS photo/Gregory A. Shemitz)

When the former cardinal Theodore McCarrick was bishop of the diocese of Metuchen, N.J., he routinely asked seminarians to join him at his vacation home, visits that regularly included the bishop sharing a bed with young men. Any reasonable standards would characterize those episodes, in which a powerful authority figure even suggested sharing a bed with students, as instances of sexual harassment. Stories like these led to Mr. McCarrick’s downfall, as was laid out in a recent Vatican investigation into allegations of harassment and abuse.

But a group of theologians, bishops and administrative professionals say that, even decades after Mr. McCarrick’s abuse, seminaries and formation houses are still learning how best to equip their students to recognize and report inappropriate behavior. According to the working group, assembled by the University of Notre Dame theologian John Cavadini, seminary and formation house leaders should strive to implement five benchmarks when it comes to protecting faculty, staff and students. There is a need, the group agreed, for regular training on harassment policies, clarity around reporting and investigating, support for victims, periodic review of policies, and the ability to apply guidelines to specific conditions. Meeting these benchmarks would not only protect seminarians from abuse and harassment but could also shape the culture in parishes.

Seminaries and formation houses are still learning how best to equip their students to recognize and report inappropriate behavior.

“It’s not just policy training but part of the seminarian’s human and pastoral formation. These seminarians are going to be priests, and we want them to go away from the seminary formed in the kind of culture that takes this seriously,” Mr. Cavadini, who directs the McGrath Institute for Church Life, told America.

According to research released last year from the McGrath Institute and the Center for Applied Research in the Apostolate at Georgetown University, 6 percent of active Catholic seminarians surveyed in 2019 said they had been subject to sexual harassment, abuse or misconduct. Nine in 10 seminarians said they had not been subjected to sexual harassment, abuse or misconduct.

The Rev. John Kartje is the rector of Mundelein Seminary in suburban Chicago, which educates about 150 seminarians from 30 dioceses across the United States. Father Kartje said he and leaders from other Catholic seminaries have discovered that one of the most important tools to protect students is creating independent structures to report harassment and abuse and to make students aware of how to use it. Providing support to victims is an essential follow-up, he said.

One of the most important tools to protect students is creating independent structures to report harassment and abuse and to make students aware of how to use it.

“Let seminarians know there is a zero-tolerance policy, that this is the expectation of anyone in seminary today, and make it clear that this is never something that should be suffered in silence,” added Father Kartje, who was a member of the working group.

While seminary culture can be secretive, in recent years some high-profile allegations of sexual harassment inside Catholic institutions have been brought to light, though church leaders say they are increasingly rare.

Last year, the Archdiocese of Boston released a report after two former seminarians posted on social media in 2018 that a culture of excessive drinking and sexual activity was common. Investigators found “only isolated incidents of sexual conduct and alcohol use that are inappropriate in a seminary setting. However, most of the factual assertions in the social media postings were largely confirmed.”

A seminary in the Diocese of Buffalo was rocked by scandal in 2019 when a former seminarian and some seminary staff accused the diocese of covering up sexual harassment and misconduct committed by a diocesan priest, which partly led to the resignation of Bishop Richard Malone last December.

And the rector of Philadelphia’s seminary wrote in a letter to priests in 2018 that the seminary was investigating claims of sexual harassment posted on social media by a former seminarian. The following year, the rector shared in a letter to the seminary community that an investigation had been completed and that seminarians would continue to be made aware of sexual harassment policies each year.

The working group led by Mr. Cavadini asked seminarians for ideas about what would be helpful in creating safe environments. Some laypeople who teach at Catholic seminaries say seminarians deserve basic protections from sexual harassment and commend the group’s efforts, but they also noted the task of curbing sexual harassment and holding institutions accountable should not be left to students.

“Seminarians are not experts on sexual violence,” Julie Hanlon Rubio, an ethicist at the Jesuit School of Theology, told America. “Calls for better training on policies, reporting and victim support are important, but most social science research on clergy sexual abuse suggests a need for better sexual formation, including study of sexual violence, sex and gender.”

Seminarians are also preparing for life in an institution that requires celibacy. Dawn Eden Goldstein has taught at Catholic seminaries in the United Kingdom and the United States. She said seminarians need to be guaranteed protections as robust as those offered any other students but that sexuality and celibacy must be addressed more candidly.

Seminarians need to be guaranteed protections as robust as those offered any other students but that sexuality and celibacy must be addressed more candidly.

“Seminiarians should have particular protections against sexual harassment because with the discipline of celibacy comes the opportunity for predators to use that discipline to hide and pressure and blackmail,” she said.

The working group that created the benchmarks, which includes representatives from more than five seminaries, five bishops and the church management group Leadership Roundtable, said in a statement that fewer than half of U.S. seminaries allowed its students to participate in the anonymous survey, a development it called “worrying.”

The working group’s convener, Mr. Cavadini, said that rather than simply lament the seemingly endless stream of bad news surrounding the church—Mr. McCarrick’s long record of abuse, the Pennsylvania grand jury report and harassment in seminaries—he wanted to do what he could to help bring about change. “It just seemed like nothing ever changes,” he said, adding that feelings of helplessness prevent many Catholics from trying to help.

As for next steps, the group said it wants seminaries and religious formation houses “to revise and update their own policies” to reflect the benchmarks and then ask them to sign a public commitment.

“Signing on publicly is a big step forward. It makes it easier for others to do so and makes it easier for mutual accountability,” Mr. Cavandini said. “But it’s not the last step,” he added, saying that he hopes U.S. bishops and other church leaders will take up the working group’s project. He said he was dismayed at how little attention seminary culture received in the McCarrick report and warned, “Unless you change that culture, you’re going to have the same thing happen again.”

– I forgave my abuser. But I will never forget his abuse.
– Pope Francis talks about Uighurs, George Floyd and Universal Basic Income in new interview
– The McCarrick Report confirms it:Clericalism powered the sex abuse crisis.
– Does the McCarrick report exonerate Pope Francis? Yes and no