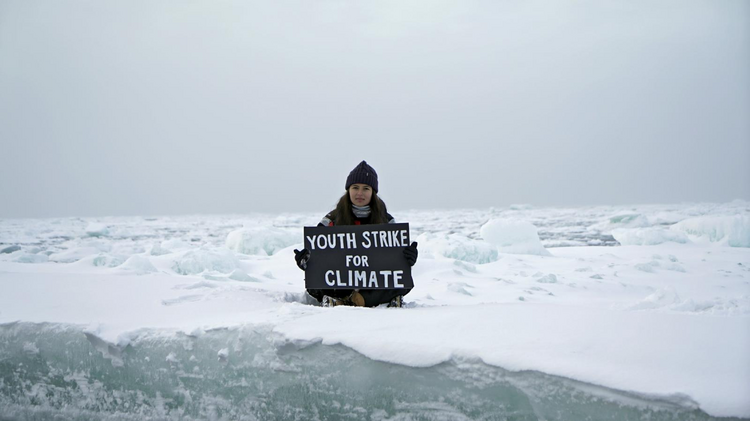 Environmental activist and campaigner Mya-Rose Craig, 18, holds a cardboard sign reading "youth strike for climate" as she sits on the ice floe in the middle of the Arctic Ocean, hundreds of miles above the Arctic Circle, Sept. 20, 2020. Young people from around the world met virtually in Assisi, Italy, Nov. 19-21 to talk about the economy and ecology, including from the point of view of Pope Francis' encyclical, "Fratelli Tutti, on Fraternity and Social Friendship." (CNS photo/Natalie Thomas, Reuters)

The economists, entrepreneurs and “change-makers,” all of whom were under age 35, were not calling for an end to capitalism but for a style of doing business that focused on creating jobs, wealth and human flourishing without excluding anyone and without destroying the environment.

The Economy of Francesco project, sponsored in part by the Vatican Dicastery for Promoting Integral Human Development, hosted a virtual global meeting Nov. 19-21.

The young adults were joined by experts in their fields who participated in their online discussions, offered encouragement and gave feedback for ways to improve their projects and research.

Paraphrasing a prayer of St. Francis, Cardinal Peter Turkson, prefect of the dicastery, thanked the young adults “for bringing light into our dark world, for bringing love in these times of indifference, for bringing hope to many of us who are in despair, and for bringing faith in a different economy that can serve an inclusive and sustainable world.”

“The economy must serve people, not the other way around,” the cardinal said, and it should do so “by healing what hurts people, meaning inequality, corruption, individualism and all sorts of social illnesses related to the creation of ‘not so good’ wealth.”

“Good wealth,” he said, is not measured simply by quantity; it “promotes integral human development while caring for our common home.”

Archbishop Domenico Sorrentino of Assisi welcomed the young people virtually to the city of St. Francis by reading from the saint’s famous “Canticle of Creation,” praising God in the gifts of his creation.

Maria Carvalho, senior consultant for climate policy and carbon pricing at South Pole in London, said she joined the Economy of Francesco project because she wanted “a theological reorientation to what we do in the social sciences,” as well as a structure for interdisciplinary, holistic approaches to the problems of poverty, climate change, inequality and a lack of human flourishing.

A self-described “oil brat seeking redemption,” Carvalho was born in India but, because of her father’s work in the oil industry, grew up in Saudi Arabia and in Alberta, Canada.

Her work is technical and scientific and tends to focus on a “meta level,” she told Catholic News Service Nov. 20. “What I wanted from the Economy of Francesco was to first step back and realize this is about God’s creation.”

At the same time, she wanted to look at the interconnectedness of the economy and climate change and, particularly how they impact the world’s poorest people, not as a category, but as actual human beings.

“St. Francis started off with the conversion of his heart. And then he did his work,” she said. What she hopes for, she said, is “a reorientation for all the brokenness in our world,” and a recognition of “the woundedness at an individual level, at a family level, at a societal level,” which make it difficult for people to imagine a different way of living and acting.

“We have forgotten that God is a loving father who actually wants to be with us, who wants to heal, who wants to orient us to what is truly good, truly beautiful and truly true,” Carvalho said.

Provide feedback on this article
Join the conversation: Login or create an account
Before you can comment, you need to update your profile to include your first and last name, as required in our comments policy. Then reload this page and you'll be set up for commenting. Update your profile
More: Environment / Climate Change / Youth