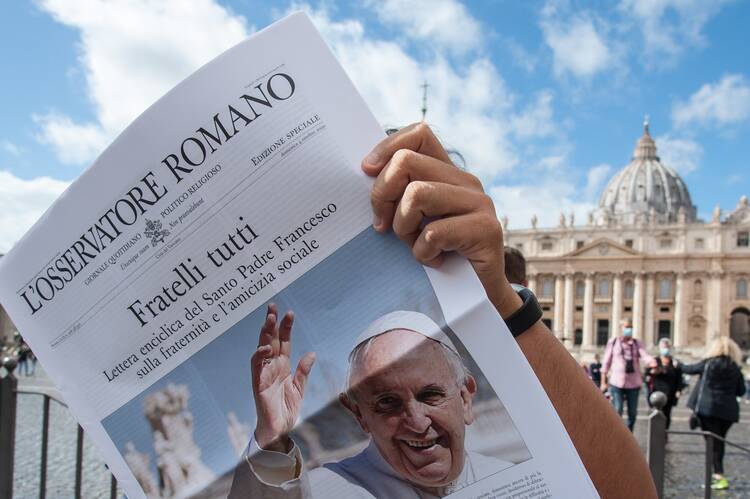 In his new encyclical, “Fratelli Tutti,” Pope Francis offers two keys through which to interpret politics: first, love, and second, the principles of his 2013 apostolic exhortation “Evangelii Gaudium.”

The first, love, suffuses the text as the great theme of the parable of the good Samaritan. As Pope Francis notes, “The parable is clear and straightforward, yet it also evokes the interior struggle that each of us experiences as we gradually come to know ourselves through our relationships with our brothers and sisters” (No. 69). In focusing on this interior struggle, he stresses that the primary challenges we face in public life today are spiritual, not theoretical or technocratic. Jesus, Pope Francis writes, “asks us not to decide who is close enough to be our neighbor, but rather that we ourselves become neighbors to all” (No. 80).

According to Pope Francis, the challenge the parable sets for politics is clear: “The decision to include or exclude those lying wounded along the roadside can serve as a criterion for judging every economic, political, social and religious project” (No. 69). This is a high bar for politics, to which he offers a noble brief in “Fratelli Tutti”: “Good politics combines love with hope and with confidence in the reserves of goodness present in human hearts” (No. 196), reiterating from “Evangelii Gaudium” that politics is “a lofty vocation and one of the highest forms of charity, inasmuch as it seeks the common good” (No. 180).

Pope Francis: “The decision to include or exclude those lying wounded along the roadside can serve as a criterion for judging every economic, political, social and religious project.”

This love plays out in politics in many ways. It leads to an authentic populism: “The truly ‘popular’ thing—since it promotes the good of the people—is to provide everyone with the opportunity to nurture the seeds that God has planted in each of us: our talents, our initiative and our innate resources” (No. 162). It helps leaders to know the world through the genius of their home cultures (No. 144). It helps them recognize the dignity of the human person and the many ways in which it is violated (No. 187). Above all, it helps them to fight to realize all the ideals that otherwise remain only words. But all of these prescriptions must find root in the love the Good Samaritan showed the stranger on the roadside: “Everything, then, depends on our ability to see the need for a change of heart, attitudes and lifestyles” (No. 166).

The second key Pope Francis offers for interacting with politics in the encyclical is a combination of the four principles of “Evangelii Gaudium.” These four principles can help us live out the love of the good Samaritan (Nos. 222-37). Pope Francis particularly invokes the principle of unity over conflict, which is closely tied to the principle of the primacy of the whole over the part.

Many commentators have noted that Pope Francis rejects nationalism. Indeed, he notes the many ills that divide and oppress the world today, while aggravated by globalization, are the product of “[n]arrow forms of nationalism” (No. 141). They have ancient roots in “the proclivity to selfishness that is part of what the Christian tradition refers to as ‘concupiscence,’” which can only “be overcome with the help of God” (No. 166). But he does not propose “an authoritarian and abstract universalism” as an alternative (No. 100). He recognizes that our deepest attachments are local, and he urges us to embrace them (No. 142).

Pope Francis often speaks of the importance of culture, and here he stresses that a grounding in and love for one’s own culture is what makes one open to other cultures (Nos. 142-45). But he also wants us to see every culture as open to the universal: “It is impossible to be ‘local’ in a healthy way without being sincerely open to the universal” (No. 46).

Pope Francis argues throughout "Fratelli Tutti" that some of the most sacred principles of modern politics remain hollow slogans.

This dynamic between the universal and local leads Pope Francis to discuss subsidiarity more in this encyclical than in his other documents. Subsidiarity appears as the place where authentic solidarity happens, “the conscious and careful cultivation of fraternity” (No. 104). The “local has to be eagerly embraced” because it is capable of “sparking mechanisms of subsidiarity” (No. 142). In other words, subsidiarity helps us to live out the tension between the part and whole.

The gap between realities and ideals is a leading motif of “Fratelli Tutti,” and the third principle in “Evangelii Gaudium” (Nos. 231-33). Pope Francis argues throughout the encyclical that some of the most sacred principles of modern politics remain hollow slogans. For example: “We are still far from a globalization of the most basic of human rights. That is why world politics needs to make the effective elimination of hunger one of its foremost and imperative goals” (“Fratelli Tutti,” No. 189). Further: “Nor is equality achieved by an abstract proclamation that ‘all men and women are equal.’ Instead, it is the result of the conscious and careful cultivation of fraternity” (No. 104).

Pope Francis: “Each day we have to decide whether to be Good Samaritans or indifferent bystanders.”

Prioritizing realities over ideals raises the question of truth: “Charity needs the light of the truth that we constantly seek” (No. 185). Pope Francis rejects majoritarianism, relativism, fideism and dialogue that does not seek truth as its end. He emphasizes that charity is more than feelings but rather, in combination with truth, offers objective and universal guidance (No. 184). He urges us to see that “[t]here is no need, then, to oppose the interests of society, consensus and the reality of objective truth” (No. 212).

Pope Francis’ principle that “time is greater than space” is perhaps his most subtle formulation from “Evangelii Gaudium,” but it, too, pervades the text of “Fratelli Tutti.” The pope castigates populists who favor their own short-term advantage rather than seeking the good of the people (No. 161). He proposes that politicians take time to reflect on their public service with a series of profound questions, including “What good did I achieve in the position that was entrusted to me?” (No. 197). Perhaps most urgently, he encourages us to see the kairos the coronavirus pandemic has brought to us: “Anyone who thinks that the only lesson to be learned was the need to improve what we were already doing, or to refine existing systems and regulations, is denying reality” (No. 7). As Michael Czerny, S.J., said at the recent Catholic Immigrant Integration Initiative conference: “We can’t go back! Lord, deliver us from the temptation to go back.”

The four principles of “Evangelii Gaudium” are ways to live out the love exemplified by the good Samaritan, but love itself has a role to play in straddling these tensions in politics: “Charity, on the other hand, unites both dimensions—the abstract and the institutional—since it calls for an effective process of historical change that embraces everything” (No. 164). Love compels not just a desire for actions on behalf of others in need, but leads to seeking transformation of our ability to address those needs both individually and communally. This may be one of the most extraordinary lines of the encyclical and in line with the pope’s words in “Evangelii Gaudium”: “There are ecclesial structures which can hamper efforts at evangelization, yet even good structures are only helpful when there is a life constantly driving, sustaining and assessing them. Without new life and an authentic evangelical spirit, without the church’s ‘fidelity to her own calling,’ any new structure will soon prove ineffective” (No. 26).

Pope Francis wants his encyclical to move us to action. Perhaps we can begin with Francis’ own words: “Each day we have to decide whether to be good Samaritans or indifferent bystanders” (“Fratelli Tutti,” No. 69). We will make that decision not in the abstract but each and every time we are confronted by a stranger in need.