The United States is becoming more Latino every day. Encuentro shows there is nothing wrong with that. 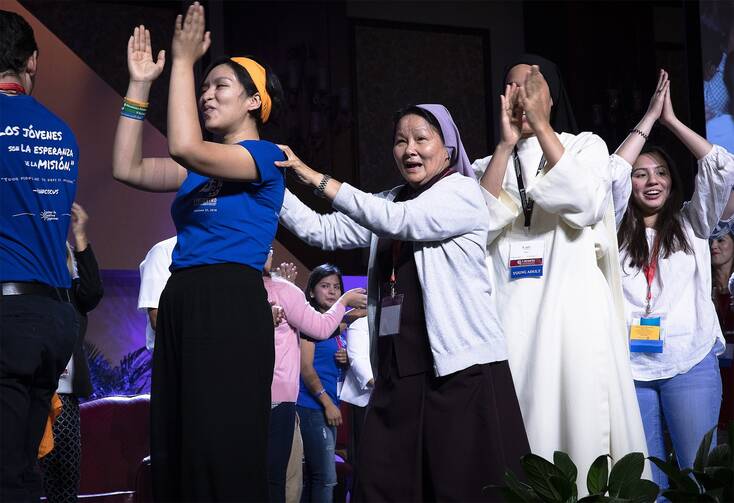 Zoom meetings and virtual conferences don’t usually start with music, laughter and dancing, but that’s how V Encuentro does it. The virtual diocesan in-service Oct. 9-10, which brought together Latino Catholic leaders from 103 dioceses throughout the United States, kicked off with Iván Diáz’s “Nuestra Alegría (Our Joy),” the official youth and young adult song for the V Encuentro process.

It is impossible to hear “Nuestra Alegría” and not dance. It makes you feel at one with God, your neighbor and, well, the entire universe. Mr. Diáz sings:

For those of you who don’t speak Spanish, he is singing about Jesus calling us to encounter each other, to be missionaries of peace and love. Mr. Díaz continues in the chorus: Our joy comes from serving others. Our mission is to evangelize. And our culture is a culture of encounter with God and humanity.

“Nuestra Alegria” has become an anthem for the V Encuentro process. It at once captures the hope of our community, our cultures and the common mission we have before us. The V Encuentro process is a response to Pope Francis’ call in “Evangelii Gaudium” for the church to go forth as a community of missionary disciples.

Encuentro is an initiative from the U.S. bishops intended to better serve the growing Latin American community. The process involves evangelization, consultation and mission, themes that resonate with Catholics from Latin America. Thousands are participating across the United States. Representatives have gone to the margins to listen to those who have not felt welcomed in the church. The findings of the consultative process will be implemented during the next two years.

“Nuestra Alegria” has become an anthem for the V Encuentro process.

“I encourage you to continue this journey,” Archbishop Nelson Pérez of Philadelphia said during the virtual in-service. “This weekend is not the end. It opens the next phase for implementing what we have learned—a new vision for pastoral ministry in the United States.”

It was a striking message of hope and unity during a time when society is beset with so much doubt and despair. We are almost a year into a global pandemic, which has exposed economic inequality and deep-seated racial divisions in the United States. We are also in the middle of a contentious presidential campaign that has further divided the country along partisan lines.

But Encuentro offers a different vision of the United States. “The landscape has changed and there is an urgent need to be even more creative and resourceful as we adapt our pastoral response generated by the V Encuentro process to this new reality,” said Auxiliary Bishop Arturo Cepeda of Detroit, the chairman of the U.S. Conference of Catholic Bishops’ Subcommittee on Hispanic Affairs.

Teresa Maya, a Sister of Charity of the Incarnate Word, said the process has helped participants listen to each other. “We need each other to conquer fear,” she said. “Hope is the gift of community.” She described Encuentro as the way to face fear, as a way forward, as a process, not a destination.

“We are called to be who Jesus created us to be: Inclusive, forgiving, merciful.”

Making the reign of God a reality means that we cannot sit idly and accept the divisions we see around us, Sister Maya said. “We are called to be who Jesus created us to be,” she said. “Inclusive, forgiving, merciful.”

The V Encuentro process is taking place while the overall number of Christians in the United States is declining. Last year, the Pew Research Center also found that less than half of U.S. Latinos are Catholic, a significant drop from 10 years ago.

Personally, I hope the findings of V Encuentro will enable the church to make a much-needed pivot. Lay Latino Catholics, including young adults, are poised to take on more responsibilities in the church and in society. The United States is becoming more Latino with each passing day, and truly there’s nothing wrong with that.

Take the Friday evening music celebration, for example. Pedro Rubalcava and other Catholic musicians sang songs from different Latin American countries in English and Spanish. They demonstrated how cultures can coexist and celebrate together while retaining their unique heritage. Over the next several years, experts expect the Latino community to continue to flourish in the United States. In 50 years, who knows? It may be a different group that is prominent. But whatever the culture or language or ethnicity, Encuentro identifies the common center of Christian life: Jesus.

“In the face of all the sadness we see, the world is waiting for an outpouring of Christian love, from you and from me,” Archbishop José H. Gomez of Los Angeles, the president of the U.S.C.C.B., said in the closing Mass. “Our Lord is calling us to love without holding anything back.”

The time has come for Latinos to lead the church and push society forward. Nothing will hold us back.

@jdlonggarcia
See all work by J.D. Long-García
Show Comments ()
Join the conversation: Login or create an account
Before you can comment, you need to update your profile to include your first and last name, as required in our comments policy. Then reload this page and you'll be set up for commenting. Update your profile