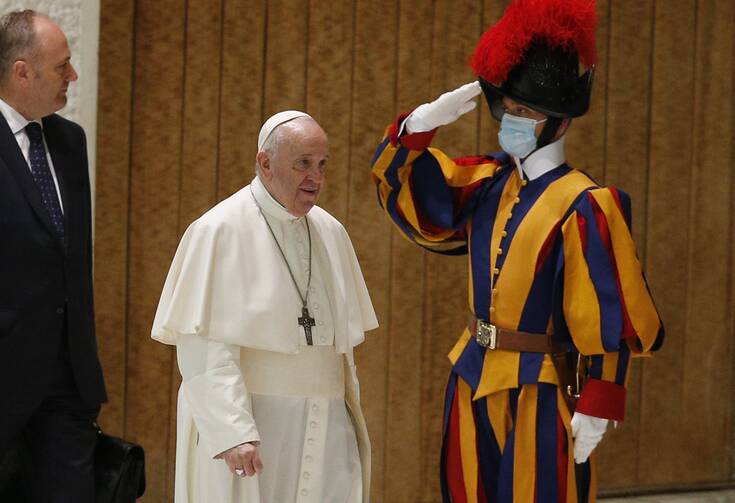 A Swiss Guard salutes as Pope Francis arrives for his general audience in Paul VI hall at the Vatican Oct. 14, 2020. A few days after four Swiss Guards tested positive for COVID-19, the pope broke from his normal pattern and did not personally greet people in the crowd. (CNS photo/Paul Haring)

A maskless Pope Francis met guests at a crowded indoor papal audience last week, kissing the hands of newly ordained priests and embracing and chatting with people who pulled their masks down or did not wear masks at all, flouting the Vatican’s coronavirus protocols.

The scene, which America’s Vatican correspondent Gerard O’Connell described as a “disaster” on the “Inside the Vatican” podcast, caused concern among Vatican officials not only about the pope’s health but whether papal audiences could safely continue at all. Today’s audience was held with new restrictions: Pope Francis, without a mask, remained distanced from pilgrims and the monsignors who usually surround him. He apologized to the audience, saying: “Sorry if I greet you from afar today. By following the regulations, it will be a help in dealing with this virus.”

An Oct. 6 letter sent to the heads of Vatican entities states that employees are required to wear masks outdoors and in any work places where social distancing cannot be guaranteed. The letter also instructs employees to wear a mask in “social contacts” and to follow other health guidelines like social distancing and sanitizing hands. Similarly strict guidelines and contact tracing measures apply to guests visiting the city-state.

Meanwhile, the Vatican has seen a second wave of the virus after successfully containing its first 12 cases by June. In recent weeks, three Vatican residents tested positive, and the Vatican disclosed Monday that four Swiss Guards had been infected and were in isolation. These latter cases have caused additional concern in the Vatican, as the Swiss Guards live together in barracks and at least one guard is always stationed outside the pope’s door. Pope Francis has a habit of shaking hands with the guard each morning when he leaves his suite.

It is the pope’s tendency toward physical closeness that has some in the Vatican concerned that he could be at risk of contracting the coronavirus.

It is the pope’s tendency toward physical closeness that has some in the Vatican concerned that he could be at risk of contracting the coronavirus. Pope Francis has rarely been seen wearing a mask since the start of the pandemic, even as he denounced as “adolescent” people who complained about mask and distancing requirements.

While most Vatican employees switched to remote work when Italy’s lockdown began, Pope Francis has continued to hold in-person meetings, sitting at least six feet away from the next person. In April, the pope visited the Church of the Holy Spirit, just outside the Vatican, and greeted the rector in the street, shaking his hand and breaking Italian social distancing protocols. Neither of the men wore masks.

Pope Francis resumed his public audiences in September, holding them outdoors with guests seated six feet apart. Francis usually wears a mask in the car on the way to these audiences, as he was photographed doing Sept. 9. When he leaves the car, however, he takes the mask off. When he enters the audience down the center aisle, guests tend to flock toward the pope, breaking distancing guidelines, and the pope likes to get close to the people.

These problems were exacerbated when the audience was held indoors last week for the first time since the spring, and the pope personally greeted guests with no masks. Mr. O’Connell explained on “Inside the Vatican” that the lack of distancing had made Vatican officials reconsider whether to hold the public audiences at all.

Francis alluded to that reconsideration today when explaining that he would not be greeting the socially distanced crowd in the audience hall, saying that there is a tendency for people to get too close to one another when the pope is near. “This way, everyone wearing their mask and maintaining their distance, we can go forward with the audiences,” the pope said. Most of the aides and all of the security and Swiss Guards near the pope wore masks and remained at a distance.

While most Vatican employees switched to remote work when Italy’s lockdown began, Pope Francis has continued to hold in-person meetings, sitting at least six feet away from the next person.

Still, Francis himself prefers not to wear a mask or keep distance. The Vatican has not responded to questions about why the pope has chosen not to wear a mask even when in close contact with others, leaving people to speculate about possible reasons. One theory is that Pope Francis struggles to breathe in a mask, as he is missing a small part of a lung. Others have pointed to the pope’s previous words and actions, saying he believes pastors should be close to people and that he has had little concern for his own safety. Early in his pontificate, the pope decided to forgo riding in a bulletproof car to greet crowds in favor of a more open vehicle, saying, “I know that something could happen to me, but it’s in the hands of God.”