Podcast: Covid cases are rising in Vatican City. Is Pope Francis at risk?

Podcast: Covid cases are rising in Vatican City. Is Pope Francis at risk? 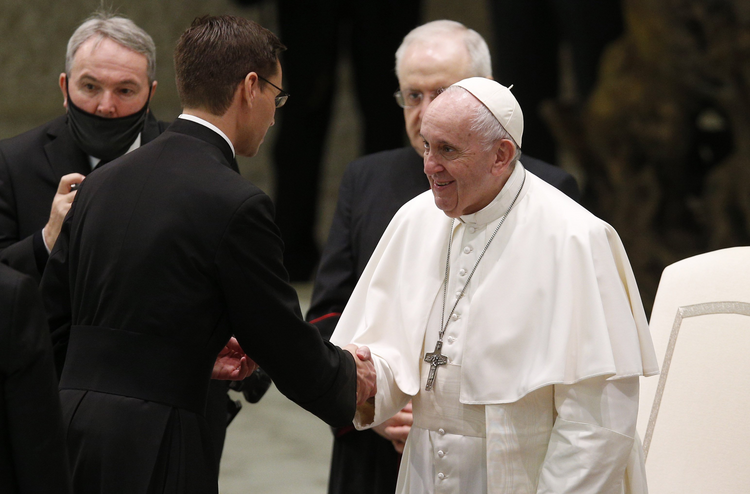 Pope Francis greets a cleric during his general audience in Paul VI hall at the Vatican Oct. 14, 2020. A few days after four Swiss Guards tested positive for COVID-19, the pope broke from his normal pattern and did not personally greet people in the crowd. (CNS photo/Paul Haring)

Vatican City saw seven new cases of the coronavirus this week, marking a sudden second wave of infections in the world’s smallest nation. Four of those infected were Swiss Guards; the other three were Vatican residents. As Vatican employees attempt to trace and test those who may have been exposed to these individuals, the influx of cases has thrown into question whether it is safe to continue papal audiences, where many people ignore social distance protocols and some, including Pope Francis, do not wear masks.

This week on “Inside the Vatican,” hosts Colleen Dulle and Gerard O’Connell discuss the Vatican’s existing protocols and why Pope Francis may be hesitant to wear a mask.

The hosts also explain Cardinal George Pell’s visit with Pope Francis this week. Is it really the final flourish in a “victory lap” around the Vatican? This week on the show, Colleen and Gerry discuss what they make of the meeting.

Gerard O’Connell: Why is Australia’s Cardinal Pell returning to Rome?