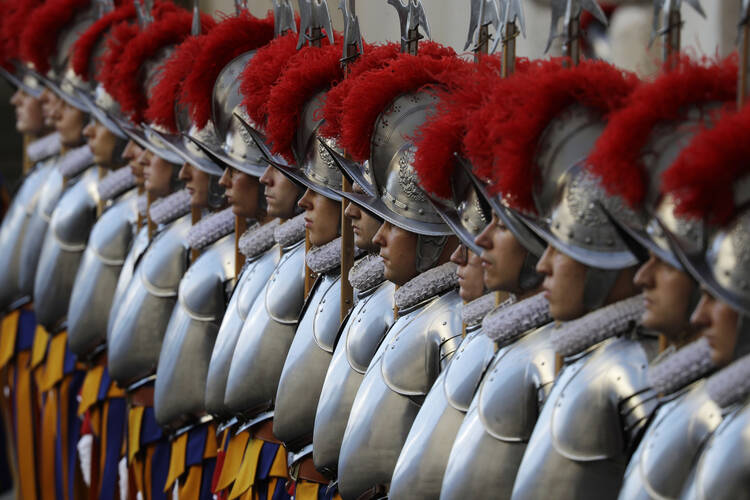 In this Oct. 4, 2020 file photo, Vatican Swiss Guards stand attention at the St. Damaso courtyard on the occasion of their swearing-in ceremony, at the Vatican, Sunday, Oct. 4, 2020. On Monday, Oct. 12, 2020, the Vatican said in a statement that four Swiss Guards have tested positive for the coronavirus, as the surge in infections in surrounding Italy enters the Vatican walls. (AP Photo/Gregorio Borgia, file)

ROME (AP) — Four Swiss Guards have tested positive for coronavirus and were showing symptoms, the Vatican said Monday, as the surge in infections in surrounding Italy penetrates the Vatican walls.

Despite the positive cases among his own guards, Francis on Monday was seen once again without a mask. He warmly greeted Cardinal George Pell in his private studio, and neither man wore a mask. Also unmasked were Pell's secretary and the Vatican photographer.

Francis, who lost part of one lung to illness when he was a young man, has drawn sharp criticism in social media for shunning a mask during his Wednesday general audience, held last week indoors. He was seen shaking hands with clerics and otherwise mingling with the masked crowd. His bodyguards were similarly maskless.

Italy is seeing a sharp surge in COVID-19 cases, with the Lazio region around the Vatican among the worst-hit in this second wave of the pandemic. Lazio currently has more people hospitalized with the virus than any other region, at 911, with 69 in intensive care.

The Vatican last week amended its mask mandates to conform to that of Italy, requiring them indoors and out. The Vatican didn't immediately respond when asked why Francis wasn't wearing one to receive Pell.

The guards, famous for their billowy blue, red and yellow striped uniforms, are all single Swiss men under age 30 and must be upstanding Catholics. They sign up for two-year tours of duty and live communally inside the Vatican City State.

During their annual swearing in ceremony — usually held in May but postponed until Oct. 4 because of COVID-19 — none of the recruits donned a mask, even though they wear them while standing guard at the entrances to Vatican City.