Why is Australia’s Cardinal Pell returning to Rome? 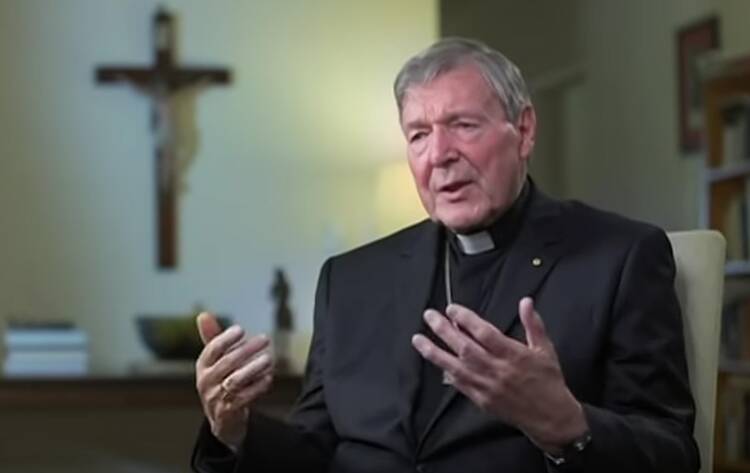 Cardinal George Pell returns to the Vatican on Sept. 30 and is likely to remain there at least until June 8, when he turns 80. His long-term plan, however, is to return to Sydney, Australia, according to a source close to the cardinal, who asked not to be identified.

“His return to Rome has been planned for the last three months. It was not a sudden decision,” the source said. He made clear the cardinal’s return was in no way linked to Cardinal Angelo Becciu’s recent renunciation, as suggested by Italian and other media in reports that recalled how the two had clashed strongly over the reform of Vatican finances. Cardinal Becciu had blocked some of Cardinal Pell’s initiatives.

Some media even suggested that Francis had asked Cardinal Pell to return to Rome, but there is no evidence for this assertion. In fact, shortly after his acquittal and release from prison, Cardinal Pell had told Sky News Australia last April that “I think I might go to Rome for a while.”

Cardinal Pell’s return was in no way linked to Cardinal Angelo Becciu’s recent renunciation, as suggested by Italian and other media in reports that recalled how the two had clashed strongly over the reform of Vatican finances.

Pope Francis will receive Cardinal Pell in audience in due course, sources told America. Although the two differ significantly on some theological questions and on the vision of the church, Francis has always stood by him in these years when the pope saw that Cardinal Pell was already being judged guilty by much of the media. Francis insisted on Cardinal Pell’s right to be presumed innocent—“in dubio pro reo”—until the judicial process had reached its completion.

After his release from prison in April, Cardinal Pell “received encouragement” from some high-level Vatican officials “to return to Rome,” the source said.

On June 29, 2017, Francis granted the cardinal a leave of absence “so he could defend himself from the accusations” of child sexual assault. Cardinal Pell always protested his innocence and returned to Australia to stand trial to clear his name. But on Dec. 12, 2018, he was convicted by a jury for historical sexual offenses against two choir boys (only one of whom was alive and could testify). He was sentenced to prison on March 10, 2019, for six years, with the possibility of parole after three years and eight months. He spent 405 days in solitary confinement until the Australian High Court acquitted him on April 7, 2020.

The tall, outspoken Australian cardinal is still a polarizing figure in his own country and was to an extent also in the Vatican. Notwithstanding his acquittal by the High Court, he will carry for the rest of his days the painful memory of the tragedy of the child abuse scandal in his homeland and the negative verdict of the Royal Commission’s report on him. Nevertheless, his return to Rome can be seen as a vindication for the man who always claimed he was innocent of the charges leveled against him. He is now eagerly looking forward to his face-to-face meeting with Pope Francis in the near future, the source told America.

Cardinal Pell’s return to Rome can be seen as a vindication for the man who always claimed he was innocent of the charges leveled against him.

In any case, the 79-year-old cardinal departed from Sydney on the roughly 24-hour flight to Rome on Sept. 29 and is due to arrive at Rome’s Leonardo Da Vinci airport on Sept. 30. From there, he was due to be driven directly to the Vatican’s health service unit for a Covid-19 test. Whatever the result, he will spend at least some days in isolation before meeting people.

Cardinal Pell still has the Vatican apartment that was assigned to him as prefect of the Secretariat of the Economy, and much of his personal belongings are there. His original plan was to come back for a short time, pack up his belongings, vacate the apartment and then return to Sydney, but some Vatican officials and friends in Rome appear to have convinced him to stay longer “for his own sake, for the sake of his family, for the sake of the church.”

“He could be here until his 80th birthday next June, and perhaps even longer, but his long-term plan is to return to Sydney, where he has a house, and where he intends to spend the last part of his life,” the source who is in frequent contact with him said.

“His health is brilliantly good, he has lost weight [in prison], and his knees are fine [after operations],” the source added.

Cardinal Pell no longer has any official position or responsibilities in the Roman Curia. His five-year term as prefect of the Secretariat for the Economy ended in February 2019, and Pope Francis also terminated his membership of the Council of Cardinal Advisors in October 2018.

Prior to his judicial odyssey and imprisonment in Australia, he was on the board (the Vatican uses the term “congregation”) of several Roman Curia offices and was considered “a big hitter.” The Vatican’s 2019 Yearbook (Annuario Pontifico), for example, listed him as a board member of three important congregations: for bishops, for the evangelization of peoples, and for the institutes of consecrated life and societies of apostolic life.

In these roles he was involved in the appointment of bishops in dioceses across the globe, except for those of the Eastern Catholic Churches, and in overseeing men and women religious orders worldwide. He was also a board member of the Pontifical Council for Promoting New Evangelization.

However, the Vatican’s Yearbook for 2020 (which was finalized before he left prison) does not list him as a board member of any congregation. In other words, he is a retired cardinal without any specific responsibilities in the Vatican.

That will, of course, offer him ample time to meet and converse with other cardinals and Vatican officials, and to write and give talks, lectures and interviews, as well as comment on what’s happening in the Vatican—things he has always enjoyed doing. He will also need to raise more money to pay for his sizable legal fees and may be able to do some of that through his writings.

While in prison, Cardinal Pell kept a journal that is already being released in 58 digital installments by Ignatius Press. The 1,000-page diary details his 405 days in solitary confinement, where he was held for his own protection, and is sure to keep him in the limelight during his Roman sojourn.