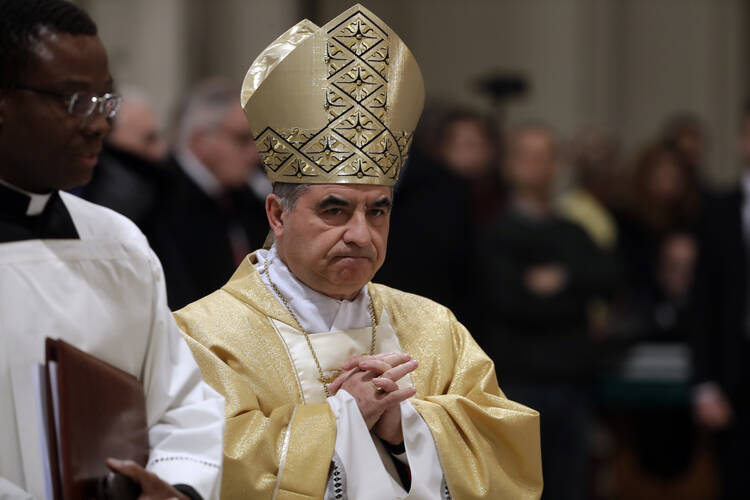 In this Feb. 9, 2017 file photo, Mons. Giovanni Angelo Becciu presides over an eucharistic liturgy, at the St. John in Latheran Basilica, in Rome. The powerful head of the Vatican's saint-making office, Cardinal Angelo Becciu, has resigned from the post and renounced his rights as a cardinal amid a financial scandal that has reportedly implicated him indirectly. (AP Photo/Gregorio Borgia, File)

In a stunning decision, Pope Francis has accepted the resignation of the Italian cardinal, Angelo Becciu, from his position as prefect of the Congregation for Saints. The cardinal has also renounced all the rights connected with his being a cardinal, the Vatican announced this evening.

This means that he no longer has the right to vote in a conclave, the principal right and prerogative of a cardinal.

Before being made cardinal by Pope Francis in June 2018, then Archbishop Becciu held the second highest ranking position at the Vatican as “substitute” or chief of staff, from May 10, 2011 to June 2018, first under Benedict XVI who appointed him as chief of staff, a position Francis confirmed when he became pope. He was one of the most powerful men in the Roman Curia in those years.

The 72-year-old cardinal was born in Sardinia and entered the diplomatic service of the Holy See, where he served as nuncio to Angola and Cuba.

The last cardinal to resign in this manner was the late Scottish cardinal Keith O’Brien. Cardinal O’Brien did not participate in the 2013 conclave that elected Pope Francis, though he could have. Following a Vatican investigation ordered by Pope Francis, the pope accepted his resignation in March 2015 from “the rights and privileges of a cardinal expressed in canons 349, 353, and 356 of the Code of Canon Law.” He was allowed to retain the title of cardinal but without the rights and privileges associated with it. The same could happen to Cardinal Becciu, but the Vatican has yet to clarify this.

The Vatican did not explain the reasons for the pope’s acceptance of Cardinal Becciu’s resignation, but it is likely that it is connected to the scandal around the purchase of the London Sloane Avenue properties. A judicial investigation of that real estate deal by the Vatican magistrates is ongoing. A number of Vatican employees have been suspended because of it so far. Vatican prosecutors have not yet brought charges against anyone related to the scandal, but since Cardinal Becciu was one of the main figures involved in the original decision regarding the purchase of the property, it would seem reasonable to conclude that his resignation is linked to this. He has denied all wrongdoing.

He is the third cardinal that Pope Francis has deprived of the rights of a cardinal, following former cardinals Keith O’Brien and Theodore McCarrick.