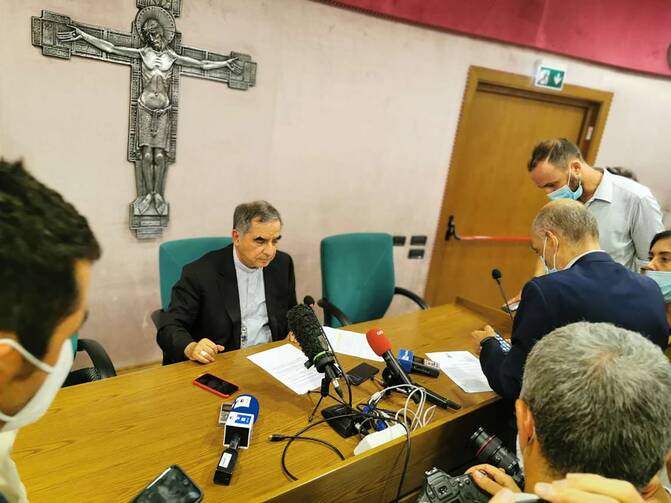 Cardinal Angelo Becciu speaks with journalists during a media conference in Rome Sept. 25, 2020. The cardinal told journalists he was asked by Pope Francis Sept. 24 to resign as prefect of the Congregation for Saints' Causes and renounce the rights associated with being a cardinal due to an embezzlement investigation involving Vatican funds and a charitable organization run by his brother. (CNS photo/Junno Arocho Esteves)

“I am shocked. Disturbed. [It’s] a blow for me, for my family and the people of my town. Out of a spirit of obedience and love that I have for the church and the pope, I accepted his request to step aside. But I am innocent, and I will show it. I asked the Holy Father to have the right to defend myself.”

That is what Cardinal Angelo Becciu told Il Messaggero, the Rome daily, on the evening of Sept. 24, shortly after Pope Francis had asked for and received his resignation as prefect of the Vatican’s Congregation for Saints, taking away his rights as cardinal, the most important of which is the right to vote in a conclave.

Today, the once-powerful Vatican cardinal held a press conference at the Istituto Maria Bambina, not far from the entrance to the Vatican, just across the road from where he lives, in what was clearly just the beginning of his battle to prove his innocence. The clearly distraught 72 year-old Sardinian-born cardinal, who for over seven years met Pope Francis almost every day, travelled with him on all his foreign trips and was seen as one in whom Francis had maximum confidence, began by recalling what happened at last night’s dramatic meeting.

As he entered the pope’s room at 6:02 p.m. (local time) for his usual weekly work report, Cardinal Becciu said, “I felt a friend of the pope and a loyal servant of the pope.” But almost immediately Francis stunned him by telling him straight out: “I do not trust you anymore!”

The pope explained that the Vatican magistrates, based on an investigation by the Italian Finance Guards, had informed him that the cardinal had committed “a crime of embezzlement.” According to the magistrates, he said, the crime was committed during his tenure as “substitute in the Secretariat of State” or chief of staff, when he made a bank transfer for 100,000 euros ($116,000) from funds of the Vatican’s Secretariat of State to the Caritas organization in his home diocese of Ozieri in Sardinia for the benefit of a cooperative that is integrated with Caritas. It assists migrants and poor unemployed people.

The once-powerful Vatican cardinal held a press conference in what was clearly just the beginning of his battle to prove his innocence.

A key factor is the fact that his brother is the president of the cooperative. The charge was of embezzlement and “favoring” one of his family.

The cardinal described the meeting with Francis, which lasted just 20 minutes, as “surreal.” He said he tried to explain to the pope that the money was not for his brother, but only for the work of Caritas, that his order to transfer the money was “within his discretionary powers” as chief of staff, as is clear from the mandate given him at the time of his appointment.

But Francis, convinced by the magistrates, asked for his resignation as prefect and for his renunciation of his rights as cardinal. Cardinal Becciu said he submitted this immediately.

Before he bade goodbye, he asked Francis if he had to leave his Vatican apartment, but the pope said he could remain there “because of all the work you have done for me.”

Just over one hour later, the Vatican press office informed the world that Pope Francis had accepted “the renunciation of the cardinal from his post as prefect and from the rights connected with the cardinalate.”

At the press conference, Cardinal Becciu confirmed that while he retains the title of cardinal, he loses, among other things, his right to vote in a conclave or participate in consistories.

Cardinal Becciu charged that some Italian media have sought to discredit him as a corrupt person, who was favoring his family, and said his lawyers told him he could take a libel charge against them.

He told the press he believes there was some “misunderstanding” regarding the 100,000 euros that he had transferred to the Sardinian cooperative, and he revealed that neither the Italian financial guards nor the Vatican magistrates had ever questioned him regarding that transfer, which they label as a crime of embezzlement. He professed his readiness to respond to any questions they may have about this.

He informed the press that after his meeting with the pope, he phoned his brother and the bishop of his home diocese and they told him that the 100,000 euros is still in the Caritas bank account and has not yet been given to the cooperative. “All the money is there. Everything is documented,” he said.

Consequently, he said, he failed to understand how the transfer could be classified as a crime of embezzlement or favoring his brother. “I sought to help the diocese, not my brother,” the cardinal stated, “And I hope that sooner or later the Holy Father will come to understand that this was a misunderstanding.”

Surprisingly, however, he revealed that the pope never raised the question of his role in the controversial purchase of the London property in Sloane Avenue. Indeed, he said that in the past the pope had told him that he believed he had acted honestly in that investment operation. Moreover, the Vatican prosecutors have not questioned him about this, even though the investigation is still ongoing.

At the press conference, the cardinal responded to questions raised by the Italian left-wing weekly, L’Espresso, which will publish a long expose on Sunday charging that Becciu had not only mishandled the Vatican funds but had also engaged in other questionable operations.

He denied its charges that he had used his influence to get the Italian bishops conference to award a grant of 300,000 euros ($350,000) to the same cooperative in Sardinia. He said he had never intervened with them for that purpose.

He rejected L’Espresso’s accusation of having favored his family by contracting another brother, a carpenter, for work related to the refurbishment of the nunciature in Angola and in Cuba when he was nuncio in both those countries before he was appointed as chief of staff in the Vatican by Benedict in 2011—a post he held until 2018 when Francis gave him the red hat.

He explained that the work given to his brother in relation to both embassies had been approved by the Secretariat of State. Moreover, he charged that some Italian media have sought to discredit him as a corrupt person, who was favoring his family, and said his lawyers told him he could take a libel charge against them.

Asked at the press conference about his relationship with Cardinal George Pell, the Australian appointed by Pope Francis as the first prefect of the Vatican’s Secretariat for the Economy in February 2014 with the mandate to carry out reforms in Vatican finances. As was well known in Rome, the two had clashed on a number of occasions. Cardinal Becciu admitted this, saying they saw things differently, but that before Cardinal Pell returned to Australia in mid 2017 to face trial, he had sent him a note of “solidarity.”

Cardinal George Pell, now living in Sydney, Australia, clearly still feels they are poles apart and in a Sept. 25 statement released to the media, he appeared to rejoice at Cardinal Becciu’s resignation. He said: “The Holy Father was elected to clean up Vatican finances. He plays a long game and is to be thanked and congratulated on recent developments. I hope the cleaning of the stables continues in both the Vatican and Victoria.”

While Cardinal Becciu has now been demoted, it was clear from the press conference today that he has every intention of fighting on to prove his innocence.

[Read this next: Has Pope Francis dismissed five Vatican employees linked to a property deal in London?]