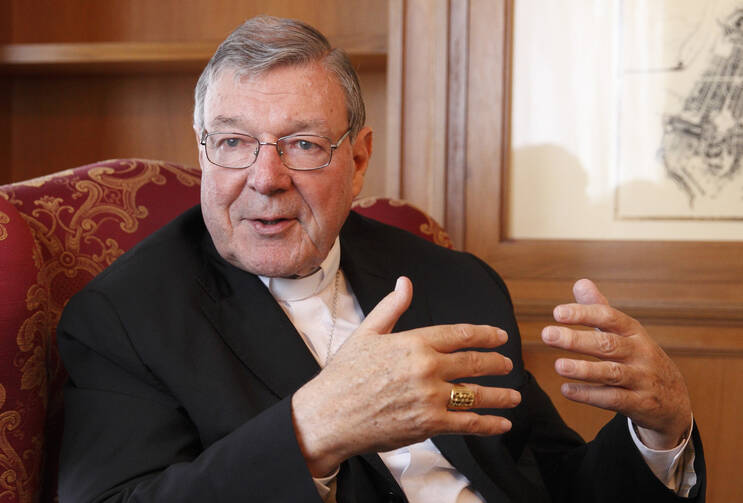 Cardinal George Pell will be released from prison after Australia’s highest court dismissed the convictions of the most senior Catholic found guilty of child sex abuse. Ending an almost five-year juridical odyssey, Chief Justice Susan Kiefel delivered the court’s decision to an almost empty courtroom in Brisbane, Australia, just after 10 a.m. on April 7. Because of the ban on travel due to the coronavirus pandemic, the other high court judges remained in their home states. The decision means Cardinal George Pell will be released from Barwon Prison outside Melbourne.

Pope Francis’ former finance minister was convicted by a Victoria state jury in 2018 of sexually abusing two 13-year-old choirboys in a back room of St. Patrick’s Cathedral in Melbourne in December 1996 while he was archbishop of Australia’s second-largest city.

Pell was also convicted of indecently assaulting one of the boys after a Mass in early 1997. The 78-year-old cleric has served more than a year of a six-year sentence. He was ordered to serve three years and eight months behind bars before he became eligible for parole.

The High Court examined whether the Victorian Court of Appeal was correct in its 2-1 majority decision in August to uphold the jury verdicts.

The High Court of Australia announced via Twitter that in a unanimous 7-0 decision, they found that “the jury, acting rationally on the whole of the evidence, ought to have entertained a doubt as to the applicant’s guilt with respect to each of the offences for which he was convicted, and ordered that the convictions be quashed and that verdicts of acquittal be entered in their place.”

The written judgment from the high court questioned whether a reasonable doubt had been overcome in the jury’s vote of guilty in the 2018 trial in which Cardinal Pell was convicted on five charges: the sexual abuse of two 13-year-old choirboys in Melbourne cathedral in the 1990s, including the sexual penetration of a child, and four counts of committing an indecent act with, or in the presence of a minor. They concluded:

The Court held that, on the assumption that the jury had assessed the complainant’s evidence as thoroughly credible and reliable, the evidence of the opportunity witnesses nonetheless required the jury, acting rationally, to have entertained a reasonable doubt as to the applicant's guilt in relation to the offences involved in both alleged incidents.

The cardinal received news of the court’s decision in Barwon Prison from his lawyers, where he has been held in solitary confinement. He was originally held in a prison in Melbourne but had to be transferred here for his safety.

The cardinal, who has maintained his innocence throughout, was convicted on the testimony of one of the choir boys, who only decided to go to the Victoria police in 2015 after attending the funeral of the other alleged victim, who had died of a heroin overdose.

The High Court of Australia announced that in a unanimous 7-0 decision, they found that “the jury, acting rationally on the whole of the evidence, ought to have entertained a doubt as to the applicant’s guilt.”

Detectives subsequently interviewed the cardinal in Rome in October 2016 and charged him with historical sexual offenses on June 29, 2017. He then returned to Australia to face trial in August 2018. The jury at the first trial failed to reach a verdict that September, and a second trial began in November and ended in a unanimous guilty verdict.

On March 13, 2019, Judge Kidd of Victoria County Court sentenced Cardinal Pell to six years in prison with the possibility of parole after three years and eight months, which meant he could regain his freedom in October 2022.

The cardinal appealed his conviction, and his appeal was heard in June 2019 by the Victoria Court of Appeal. Its three judges reached a decision on Aug. 21, rejecting two of the grounds for the cardinal’s appeal unanimously and the third by a count of two to one. His conviction was therefore upheld and the cardinal’s attorneys took his case to the High Court, the final arbiter of his appeal.

Cardinal Pell’s attorneys had challenged the appeal court judges for not giving due weight to the many witnesses in the cardinal’s favor and especially for not recognizing the arguable implausibility of his committing a sexual assault in Melbourne cathedral under the circumstances presented to the court.

The cardinal received news of the court’s decision in Barwon Prison from his lawyers, where he has been held in solitary confinement.

The conviction of the cardinal and his sentencing to prison hit the Vatican and the church in Australia like an earthquake. He has long been the most senior figure in the Australian church and was the first-ever cardinal to be convicted of the sexual abuse of minors.

Moreover, at the time of his trial he still held a senior position in the Vatican as prefect of the Secretariat of the Economy and as one of the nine members of Pope Francis’ council of cardinal-advisors. His conviction polarized public opinion both nationally and internationally.

Over the years, the Vatican has offered a measured response to his conviction and his sentencing as well as to the rejection of his previous appeals, expressing its confidence in the Australian judicial system and declaring its concern for the victims of abuse. It also noted the cardinal’s constant insistence of his innocence.

Pope Francis has refused to comment on the case other than to insist that Cardinal Pell, like everyone else, has a right to due process and the presumption of innocence until a final judgment is delivered. The pope said he would speak on the case only after that had been rendered.

Following the cardinal’s sentencing in March, the Vatican said it had opened its own investigation into the allegations against Cardinal Pell but said that it would wait until the Australian judicial process had eånded before proceeding further.

The Vatican is expected to issue a statement tomorrow, following today’s decision by the high court.