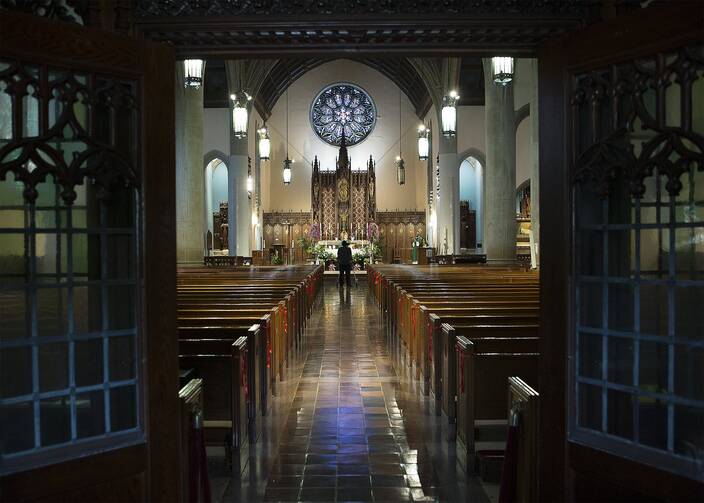 A cameraman films Father Kevin Kennedy at the altar at St. Gabriel Catholic Church in Washington, D.C., on July 11, for a live-streamed Mass. (CNS photo/Tyler Orsburn)

Not many young adult Catholics are tuning into Masses on television or online, according to a survey conducted in July and August by the Center for Applied Research in the Apostolate. A more troubling finding is that 36 percent said they plan to attend Mass less frequently when stay-at-home orders related to the Covid-19 pandemic end and churches fully reopen.

Only 25 percent said they participated in Mass online or on television during the pandemic “somewhat” or “very” often.

Another 51 percent say they will return to their normal pattern of attendance after the pandemic, and 14 percent said they plan to go to Mass more often.

We surveyed 2,214 self-identified Catholics between the ages of 18 and 35; only 25 percent said they participated in Mass online or on television during the pandemic “somewhat” or “very” often. (The CARA poll has a margin of error of 3.6 points.) Another 22 percent said they watched Mass “a little,” and 54 percent said they had not watched at all.

The respondents saying that they plan to attend Mass less often in the future cut across all categories of prior attendance. Of the weekly attenders, 31 percent said they will be attending Mass less often when things return to normal, compared with 42 percent of monthly attenders and 35 percent of those who used to attend a few times a year or less often.

There are few demographic differences between those who say they will return to normal frequency, attend more often or attend less often. Non-Hispanic white young adults are among the least likely to say they will attend Mass less often after the pandemic (29 percent). Black and Asian Catholics are among the most likely to say they will attend less often (45 percent and 44 percent, respectively). Plans to reduce attendance are more common among divorced (41 percent) and separated (46 percent) young adults than among those who are married (34 percent).

CARA uses its polling and Google search data to estimate Mass attendance by the week. Each year, searches for Mass-related terms peak at Christmas, which is known to have the highest attendance of the year (approximately 64 percent of all self-identified Catholics). In 2019, that meant about 44.1 million attended Masses at the church’s 16,914 parishes. Weekly Mass attendance in 2020 had been averaging 16 percent of self-identified Catholics before Ash Wednesday and the first day of Lent, on Feb. 26.

Plans to reduce attendance are more common among divorced (41 percent) and separated (46 percent) young adults than among those who are married (34 percent).

We estimated Mass attendance on March 1 to be about 18 percent. On March 8, it fell to 15 percent, then on the following two Sundays to 10 percent and 6 percent. Attendance for Easter services was more difficult to estimate, as the uptick in Google searches may have indicated people looking for a way to watch Mass on television or online. As of the end of August, weekly Mass attendance was still averaging an estimated 6 percent.

When asked in an open-ended question how they were practicing their faith at home, respondents indicated praying, watching Masses online or on television, reading the Bible and participating in religious discussions. Some noted celebrations of Easter at home, and a few indicated praying the rosary. Many included helping others as one of their ways of practicing their faith while home. Eighteen percent said they had not done anything to practice their faith while at home during the pandemic.

CARA also asked respondents if their parish had done anything to reach out to them during the pandemic. Among those who were aware their household was registered with a parish, 34 percent said they knew of their parish reaching out to them. Seven percent who said their household was not registered indicated that their parish nevertheless had contacted them during the pandemic in some manner. Asked about the nature of contacts from their parishes, many said they were asked to donate money or to help distribute food or Bibles. There were also efforts by parishes just to make sure everyone in a household was well. The outreach took the form of emails, phone calls, texts and posts on social media.

Only 13 percent of respondents said their households have been regularly contributing since the pandemic began.

Only 29 percent of the Catholic young adults in our survey said that their households had been regularly contributing to their parishes before the pandemic. But note that many young adults still live with their parents and may not be fully aware of their parents’ pattern of giving. (Before the pandemic, CARA surveys had indicated that 45 percent of self-identified Catholics in the United States resided in a household that regularly gave to their parish’s weekly offertory collection.) Only 13 percent of respondents said their households have been regularly contributing since the pandemic began.

Data from CARA’s most recent National Survey of Catholic Parishes, conducted in 2014, revealed that about half of the responding parishes provided their parishioners with the opportunity to contribute online, a share that presumably has increased during the pandemic. CARA estimated in April that weekly giving to parishes was likely only about 42 percent of what it was prior to the pandemic shutdowns.

Once the pandemic is over, 53 percent of young adult Catholics say they will give as they did before, and 13 percent say they will give more frequently than they used to. Thirty-four percent say they plan to give less often. This may reflect people assuming the pandemic will be over but the economy will take longer to recover and they may not be as financially able to give as they used to.

Note: The CARA survey of Catholics ages 18 to 35 was conducted by NORC at the University of Chicago, using their AmeriSpeak panel. The survey was offered in English and Spanish, and respondents chose to participate either through an online survey or a telephone interview. The weighted cumulative response rate was 4.2 percent. Survey results are weighted by age, sex, education, race/Hispanic ethnicity, housing tenure, telephone status and Census Division. For more information about the study, contact Mark Gray at mmg34@georgetown.edu. 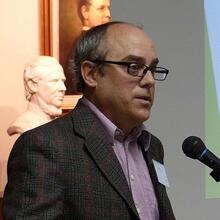