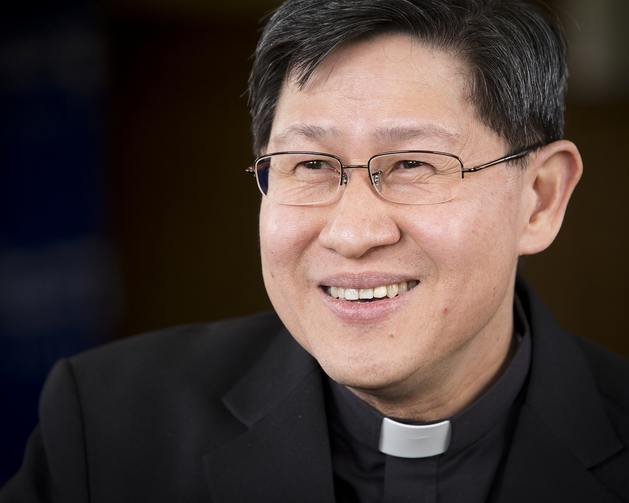 Cardinal Luis A. Tagle of Manila, Philippines, is pictured in this 2014 file photo taken in Washington. (CNS photo/Tyler Orsburn)

Cardinal Luis Antonio Gokim Tagle, 63, the prefect of the Vatican’s Congregation for the Evangelization of Peoples, tested positive for Covid-19 on his arrival at Manila airport on the evening of Sept. 10. He showed no symptoms when tested but is now in isolation, the Vatican confirmed today.

Matteo Bruni, the director of the Holy See Press office, confirmed the news to ANSA, the Italian news agency. The cardinal does not have any symptoms and will remain in mandatory self-quarantine in the Philippines, he said.

He is the first Vatican cardinal-prefect to have contracted the virus. There have been 12 confirmed cases of Covid-19 in the Vatican since the pandemic hit Italy on Feb. 21, but all have been cured. The Vatican has strict regulations governing the prevention and management of the virus, and has closely followed the Italian norms for the pandemic since most of those working in the Vatican actually live in Italy.

There is no concern that he could have infected Pope Francis, with whom he is very close, because the cardinal had his last private meeting with the pontiff on Aug. 29.

Cardinal “Chito,” as he is popularly known in the Philippines, appears to have been infected by the virus in the past 72 hours. He did not have the virus on Sept. 7 when he was tested for it at the Vatican health and hygiene unit. Therefore, he was either infected in the 48 hours between that date and his departure for Manila or, perhaps, on the long flight from Rome to Manila where he arrived last evening (Rome time), Sept. 10.

Once he received the news of the positive test, the cardinal informed his closest advisors in the Vatican. Mr. Bruni said the Vatican’s health and hygiene office is now “carrying out the necessary checks among those who have been in contact with him in the past few days.” But it seems that in recent days he had few meetings with officials at the Vatican congregation to which Pope Francis appointed him last December.

Furthermore, there is no concern that he could have infected Pope Francis, with whom he is very close, because the cardinal had his last private meeting with the pontiff on Aug. 29.

Health checks relating to the virus are also being carried out at the Filippino College in Rome where the cardinal has resided ever since his arrival here earlier this year, and where he has probably interacted with persons living there in these past days.

The Philippines has registered 253,000 cases of infection from the coronavirus pandemic, and more than 4,000 deaths.