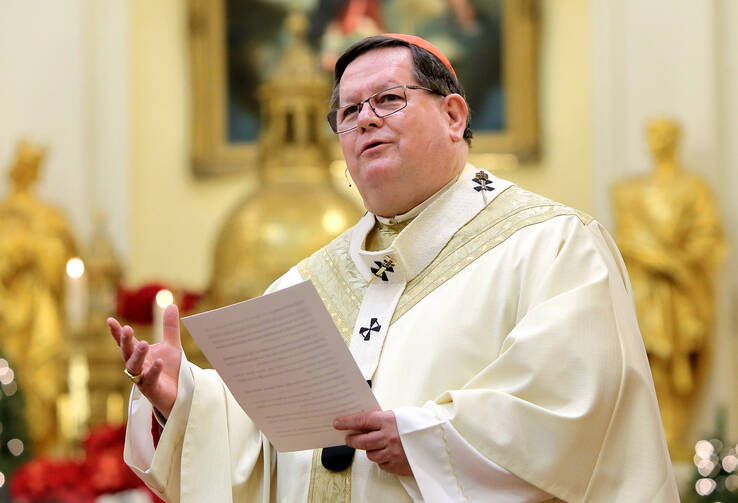 In a strongly worded statement on July 26, Cardinal Gérald Cyprien Lacroix called on the Quebec government and its health authorities to “stop ignoring the existence of” the many faith communities in the province—Christian, Muslim, Jewish and others—and to enter into dialogue with them for the good of the whole of society, particularly at this time of the pandemic that has already infected over 58,800 and caused the deaths of some 5,670 Quebecers.

“Please, let us breathe! Over the past four months, we have solidly proven our good faith and our willingness to collaborate entirely with the authorities. Do not abuse our patience, and stop ignoring our existence and our sense of responsibility,” the 63-year old cardinal pleaded with the Quebec authorities in a statement, which he read at the end of Mass in the Basilica of Sainte-Anne-de-Beaupré, on the Feast of Saint Anne, the patron saint of Quebec.

Speaking by phone with America on July 28, Cardinal Lacroix explained that he decided to speak out because, as the government slowly seeks to reopen society following coronavirus lockdowns, “millions of believers from the different faith communities in the province of Quebec feel betrayed, ignored, by the authorities. There are very many believers in the province, not just those who go to church or synagogue or mosque every week.”

“Even casinos have been granted, before us, the right to accommodate 250 people in areas much smaller than our churches.”

In his statement on July 26, the cardinal said he considered it incredible, for example, that “funeral homes were quickly allowed to offer funeral rites in their small parlours” while “we [were] prevented from celebrating Christian funerals in our large churches.” He found it hard to accept that “while throughout the pandemic the sale of alcohol and cannabis was considered an essential service, faith communities, which undoubtedly we consider capable of offering an essential service to the community, were virtually ignored.”

He recalled that it took questions from journalists at news conferences with the premier and the director of public health “to find out what was happening with places of worship.” Indeed, he said, from the Quebec government’s planning chart, published on May 25, “we learned that after the preliminary phase, after phases 1, 2, 3, 4, 5 and 6, in the item called ‘Subsequent Phases,’ appeared ‘places of worship,’ alongside bars and cruises.”

He described as “unbelievable” that “even casinos have been granted, before us, the right to accommodate 250 people in areas much smaller than our churches.”

“We learned that after the preliminary phase, after phases 1, 2, 3, 4, 5 and 6, in the item called ‘Subsequent Phases,’ appeared ‘places of worship,’ alongside bars and cruises.”

Asked why he thought the Quebec authorities have adopted such a closed position towards faith communities, Cardinal Lacroix told America, “The position of the authorities is based on a false conception of separation of church and state and not understanding the place of faith and spirituality in the life of a society. They think we will be telling them what to do, but we have no intention of doing that; we see ourselves as partners in society, working for the good of the entire population.” He concluded: “We just want an open, frank, respectful dialogue with the authorities so that we can work together for the good of all the people, not just of the faithful.”

Among those present in the basilica when the cardinal spoke was Anne Leahy, former ambassador of Canada to the Holy See. Well versed in church-state relations in Canada, she provided perspective on the cardinal’s statement in an email exchange with America. “We have a real issue of an openly hostile government of Quebec, ignoring all religious leaders and refusing to acknowledge that there is a public religious dimension in society,” she said.

She was referring to the government led by Premier François Legault, who heads the Coalition Avenir Québec, a coalition of more to less indépendantistes, all nationalist, that last June introduced legislation that bans public workers in positions of “authority” from wearing religious symbols, while they are on duty, and now in the name of the laicité of the state ignores faith communities.

“The plan the church submitted for deconfinement was scientific and comprehensive, and the government had no justifiable motive to ignore them.”

Ambassador Leahy considered it “noteworthy” that “given that the pandemic is not over, the cardinal judged that he had no other option but publicly to address the government of Premier Legault to plead for direct contact in the future.” She described his intervention as “factual, practical and forward-looking, not meant to complain or admonish.” In her view, “the plan they submitted for deconfinement was scientific and comprehensive, and the government had no justifiable motive to ignore them. This statement by the most conciliatory of prelates, Cardinal Lacroix is remarkable. I was in the basilica when he spoke. He got a standing ovation!”

According to the 2011 census (the most recent figures available) 82 percent of the province’s population identified as Christian, and Catholics counted for 75 percent of Quebecers. Non-Christian religions have grown due to immigration, and Muslims account for some 3 percent of Quebec’s population, while Hindus, Sikhs and Buddhists each represent less than one percent. Significantly, however, the number of Quebecers who do not identify with any religion had reached 12 percent by 2011.

Even given a change in these percentages, one thing is clear, religion is still a significant factor in the life of the people of Quebec. Cardinal Lacroix told America: “When we saw that we [faith communities] were being ignored, we got together the leaders of the different religious communities—Christians, Jewish, Muslim—and we decided to unite, to work together to search for paths for a fruitful dialogue with government authorities.”

“When we saw that we were being ignored, we got together the leaders of the different religious communities—Christians, Jewish, Muslim—and we decided to unite.”

In his 1,200-word statement delivered in French on Sunday, Cardinal Lacroix summarized events in this province of 8.4 million people since the pandemic struck last March. He said, “the situation…has not been easy for anyone, neither you nor us. No one had anticipated such a pandemic, and no one had a plan to face up to it. We had to develop one as the situation progressed.” He recalled that in the church “all of us have done our best to protect the health of the faithful, ordained ministers, and coworkers” and this involved making “difficult” decisions related to the “closure of our places of worship and the cancellation of many pastoral activities” for four months; it caused pain and upset many pastors and faithful alike.

Throughout these months, he said, “we have proved to be team players, wishing to play our part for the good of society and to participate in the collective effort in this time of crisis. It was necessary for us to be in solidarity, and we have been.” But “unfortunately,” he said, “we are forced to conclude that there has been little or no recognition of all these efforts. Faith communities, of whatever denomination, do not seem to be worthy of the attention of our elected representatives or the public health authorities.”

Cardinal Lacroix concluded: “This leaves me with the impression that the government authorities are not taking us seriously and that they deliberately ignore our existence.” Indeed, he said, “We have never been able to establish a frank and direct dialogue with government nor public health officials. Our contacts have been continually limited to third parties.”

“Spiritual needs are an integral part of human life for those who express the need for them.”

Cardinal Lacroix reminded the Quebec authorities that “spiritual needs are an integral part of human life for those who express the need for them—and there are still many of those in Quebec” and these people “deserve to be treated with respect…by their government.” He reminded them too that “faith communities are not simply places to pray” but also places where people “find support” and “aid at social, family, and human levels.”

He declared that the government’s failure to undertake “any form of open and measured dialogue with the leaders of faith communities, doesn’t appear healthy for our society in Quebec.” While stating clearly that “we aren’t begging the government for any favour or privilege,” the cardinal reminded the Quebec government that “believers are regular citizens, women and men who are fully committed in many aspects of society in the Quebec we love. We have the right to be treated with respect and not ignored or relegated to item VARIA [his emphasis].”

He informed the public that as church leaders “we still have to negotiate week after week with the authorities” that “are trying to impose restrictions on us that go beyond reasonable,” even though the church has implemented all the sanitary measures they decreed.

At the same time, Cardinal Lacroix assured the faithful that “just because we haven’t yet been able to be heard doesn’t mean that we are giving up” and, he added significantly, “this doesn’t only apply to our Catholic community, but also to the well-being of all the communities of faith, for the quality of the way that the people of Quebec wish to live together.”

Speaking forthrightly, he told the Quebec authorities that “after 400 years of presence, of commitment and partnership in building this nation, it just isn’t right to treat communities of faith in this manner.” He added: “We are proud of our contribution and we have no intention of entrenching ourselves in our sacristies. The mission of the church is to be at the heart of society; this is where the disciples of Jesus must bear witness to the faith that animates and sustains them, in order to be alongside their brothers and sisters, believers or unbelievers, all together to work together for the good of this nation.”

Cardinal Lacroix concluded, “The state is secular, but society is not! In our beloved Quebec, believers and unbelievers live together. All must be respected because everyone has a right to their place.” He promised they would “continue to seek paths of dialogue” because that is “the most promising way to continue the road together, in harmony, respect and peace.”

Church officials in Quebec told America on July 30 that the cardinal’s statement has produced “a positive response” from the government, and a path to dialogue appears to be opening up.