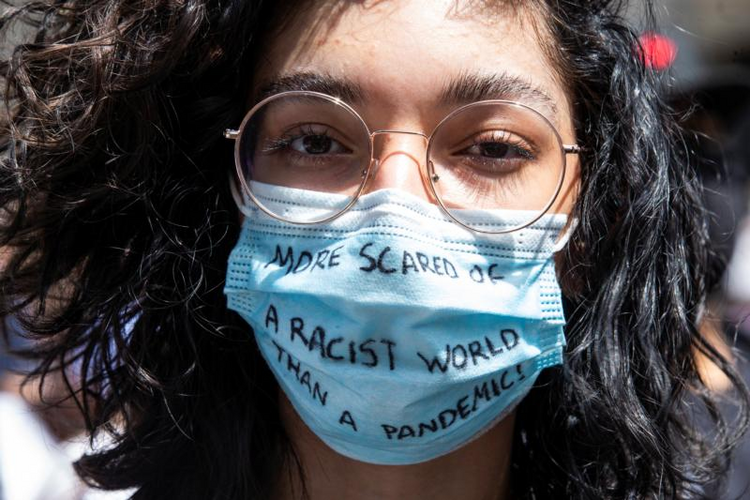 A woman wearing a protective mask takes part in a protest against racial inequality and police brutality in Montreal June 7, 2020. Bishops across Canada have condemned racism and encouraged peaceful protest amid the global wave of outrage at the police killing of George Floyd, an unarmed African American. (CNS photo/Christinne Muschi, Reuters)

TORONTO (CNS) -- Bishops across Canada have condemned racism and encouraged peaceful protest amid the global wave of outrage at the killing of George Floyd.

"These protests reflect justifiable anger and frustration," Vancouver Archbishop Michael Miller wrote in a pastoral letter June 7. "Racist attitudes and discrimination have been tolerated for far too long."

Racism is not just an American problem, Archbishop Miller wrote, drawing attention to the suffering of indigenous Canadians.

A statement from the Canadian Conference of Catholic Bishops called racism "the denigration of humankind, the denial of God-given rights."

"The bishops and Catholic faithful of Canada join with Pope Francis in lamenting all who have lost their lives and suffered because of exclusion, racism and violence, which are antithetical to the Gospel of Jesus Christ," the bishops wrote in a June 8 statement.

"We invite all Canadians to pray for all those who have lost their lives as a result of the sin of racism, to work for reconciliation and healing, as well as for peace and justice in our land and throughout the world."

The bishops' statements followed the May 25 killing of Floyd, an African American, while in the custody of Minneapolis police. A video showed Floyd died after a white officer knelt on his neck for almost nine minutes. The officer, Derek Chauvin, has been charged with second-degree murder.

Cardinal Thomas Collins of Toronto emphasized the reality of racism in our society.

"Racism knows no boundaries, and it remains a present-day challenge that must not be ignored," Cardinal Collins said in a June 5 statement.

"It is important that ... we authentically listen to the plight of those who have been victims of racism, intolerance and violence. I firmly believe on these occasions that we should all listen more than we speak, in order to gain a better understanding and appreciation of the suffering of others."

Ottawa-Cornwall Archbishop Terrence Prendergast called for "respect for the personal dignity and life of each person created in God's image," in a June 5 statement.

Protests in Ottawa organized by the No Peace Until Justice Coalition drew Prime Minister Justin Trudeau and several of his Cabinet ministers, who knelt in silence for eight minutes and 46 seconds, the amount of time Chauvin knelt on Floyd's neck.

"I invite you (to) speak about and to pray for the healing of relationships between people of different races and to help bring about the elimination of expressions or gestures of racism wherever these are found, including in Canada," said Archbishop Prendergast.

"It is above all in his death on the cross -- which was death by asphyxia -- that the Lord ultimately witnessed to how the deepest transformation is brought about by God. George Floyd, too, died by asphyxiation, and the Lord who invites us to stand with the crucified in our day summons us to solidarity," Archbishop Bolen said.

The archbishop was quick to point out racism does not respect boundaries.

"Here in Canada, here in Saskatchewan, we, too, struggle with an embedded racism," Archbishop Bolen said. "Why is it that our indigenous people are on the losing end of so many societal indicators of well-being?"

Archbishop Bolen also had a question for Christians.

"How is it that our churches, inspired by the Gospel of the crucified Christ, are so often blind to the suffering and injustice, humiliation and wounds of our sisters and brothers?"

Michael Swan
Provide feedback on this article
Join the conversation: Login or create an account
Before you can comment, you need to update your profile to include your first and last name, as required in our comments policy. Then reload this page and you'll be set up for commenting. Update your profile