Singing in church on hiatus for now but will return, say music ministers

Singing in church on hiatus for now but will return, say music ministers 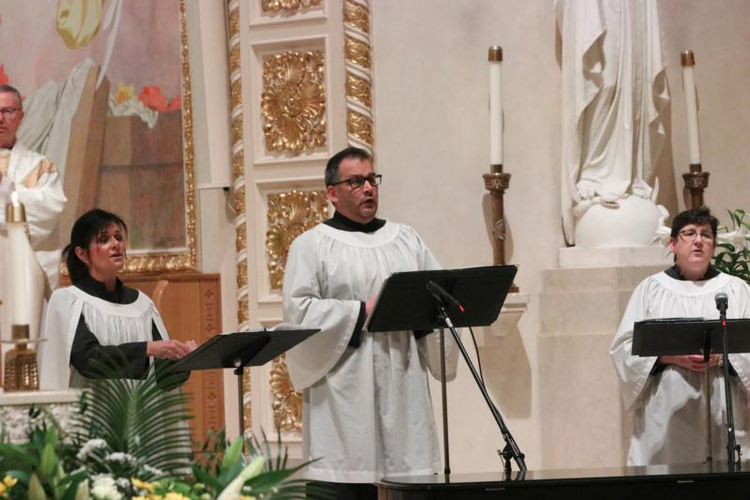 PORTLAND, Ore. (CNS) -- With choirs and hymnals suspect because they may spread the coronavirus -- and perhaps the next pathogen -- what is the future of singing at Mass?

Though a few parishes have set singing aside for now, liturgical experts say worship is inconceivable without the musical voices of the faithful. Scripture and church history show that the earliest Christians sang as part of their commemorations. The task amid the current pandemic, the experts say, is to believe the science and then adapt.

"For most of the problems in the world that have arisen, people have stepped up to work on that problem," said Luke Rosen, music director at Corpus Christi Parish in Toledo, Ohio, and choir teacher at St. John's Jesuit High School. "The entire world is working on this one. We will come up with better solutions than to shut choirs down for two years."

Oregon Catholic Press, which publishes much of the nation's Catholic liturgical music, is working with liturgists and pastoral musicians around the country to find creative and safe ways to sing.

"I don't believe removing all music and singing from Mass is the answer," said Wade Wisler, publisher of OCP. "Our love for God and worship of him requires it."

But one of the most dramatic instances of COVID-19 infection came March 10 when the Skagit Valley Chorale an hour north of Seattle practiced for more than two hours in a concert hall about the size of a volleyball court.

Choir members knew the virus was spreading in the metro area, so avoided shaking hands and hugging. They used hand sanitizer and brought their own copies of music. They did, however, share snacks.

A single carrier of the coronavirus -- who had minor cold symptoms -- spread the disease to 52 of 60 choristers. Two died.

Some investigators reported that singing, more so than talking, turns respiratory droplets into vapor that can carry the virus as far as 16 feet. And singers take big gulps of air. It's a heyday for a virus, the researchers said.

The American Choral Directors Association held a May 5 webinar in which health officials explained some views of the science. The webinar's bottom line: There is no safe way for choirs to perform or rehearse until a COVID-19 vaccine is proven effective.

Rosen, also a composer of sacred song, said church musicians should not panic but should rise to the occasion with creativity. He has proposed plexiglass shields or even booths to keep singers and congregations safe, at least for the next year or two.

"Choir directors around the world know we aren't going to go back to what we were doing," Rosen told the Catholic Sentinel, Portland's archdiocesan newspaper. But canceling choirs for Mass and other events six months or a year ahead is unwarranted, he argues.

"The only way forward cannot be to just stop," said Rosen, who thinks the Skagit Valley example is not enough to draw scientific conclusions. Though he wants everyone to take bold precautions now, he called for more study.

"I don't think we are giving science enough credit," he said, predicting that there will be quick tests to ensure choir members are healthy before they sing.

Rosen said science also might save songbooks, suggesting ultraviolet light. New York City is now experimenting with ultraviolet lamps to kill the coronavirus on its buses and trains. Medical operations have long used the high-intensity light for disinfecting operating rooms and clinic surfaces.

Most Catholic parishes will continue music with a small crew. With small numbers allowed in a church at one, pastors don't want limited spaces filled by singers and other liturgical ministers.

Wisler of OCP said that, under the present circumstances, a single cantor and accompanist is reasonable, as is focusing on songs the community already knows and loves.

In the Archdiocese of Portland, cantors need not wear masks, but only worshippers who have masks can sing along. But a few parishes in western Oregon have nixed music for the time being.

"Congregational singing will not be employed as I have seen little tendency toward the wearing of face masks and this is essential to have singing," Father William Palmer said in a note to members of Sacred Heart Parish in the coastal town of Newport, where a seafood plant suffered an early June outbreak of COVID-19 that sickened more than 100 workers.

All parishes have been ordered to remove communal songbooks as a way to prevent spread of the virus. "We don't want to have to sanitize books after every Mass," said Father Ken Sampson, pastor of Sacred Heart Parish in Medford.

The Catholic Church has a long history of people bringing their own missals to Mass. The pandemic may revive that custom.

The real question is crafting liturgy so the people of God can participate as fully as possible while staying safe, said Benedictine Father Godfrey Mullen. He taught liturgical theology for 14 years at St. Meinrad Seminary and School of Theology and now is rector of St. Benedict Cathedral in Evansville, Indiana.

"We're looking for a middle road that respects the science as we have it but respects the rights of the faithful to participate actively," Father Mullen said.

He cites teaching from the U.S. Catholic bishops, who say song is a gift God has bestowed upon his people. "Removing that should not be done lightly," the priest said.

He knows that masked worshippers cannot project their voices, but he thinks that is a decent compromise that keeps people safe while allowing worship.

"We cannot eliminate the risk, but there are ways we can do it safely," said Msgr. Gerard O'Connor, director of the Office of Divine Worship at the Archdiocese of Portland. "Music is such an important part of Catholic liturgy. It would be terrible if we had no singing at church. We can figure it out."

Msgr. O'Connor predicted that while choirs are on hold for now, they will return and "will always be a part of Catholic liturgy."

One solution to the absence of songbooks is musical simplicity, said Msgr. O'Connor. The church has a rich collection of antiphonal singing -- songs in which all repeat a simple refrain with the cantor singing verses. The responsorial psalm is in antiphonal form. There are antiphonal arrangements for processions, Communion and other parts of Mass.

Some churches have suggested projecting music and lyrics onto a screen or wall during Mass. That does not fit Catholic liturgy, Msgr. O'Connor said. He describes projection as a "secular and worldly" practice imposed on a timeless action.

Participation in liturgy is vital, but that does not always mean doing something, said Father Andrew Menke, executive director of the Secretariat of Divine Worship at the U.S. Conference of Catholic Bishops in Washington.

Listening as a cantor sings and meditating deeply might be one way liturgical music will happen during the pandemic, and that is acceptable to Father Menke.

"What participation means is that with your mind and heart you are part of that prayer," explained Father Menke. "I am by no means discouraging singing, but a mature Catholic realizes that I can participate even if I am not singing a hymn."