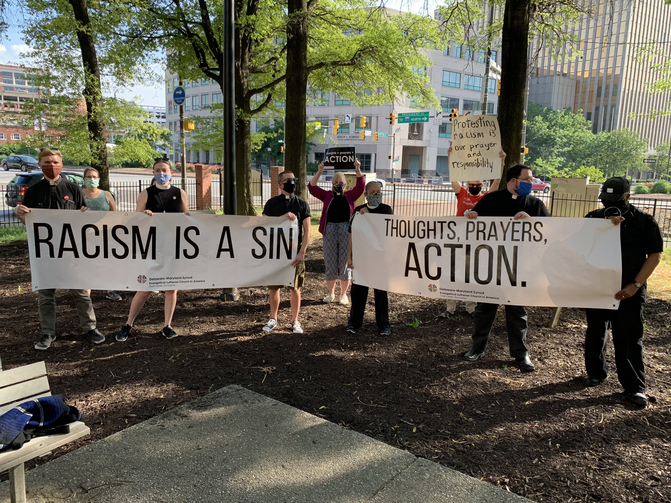 Members of Maryland Lutheran churches hold up banners calling for action against racism during an interfaith prayer vigil in Baltimore June 3, 2020, to pray for justice and peace following the May 25 death of George Floyd -- an unarmed black man said to have spent several minutes under a Minnesota police officer's knee before becoming unconscious. (CNS photo/Tim Swift, Catholic Review)

Pope Francis spoke out on the police killing of George Floyd last week as protests against racism spread across the globe. This week on Inside the Vatican, veteran Vatican correspondent Gerard O’Connell describes the protests in Europe and the change of heart some Europeans have had about racism in their countries.

Pope Francis made his position on the death of George Floyd clear as he called two American bishops to thank them for speaking out against racism. One, Bishop Mark Seitz of El Paso, had been photographed kneeling with a Black Lives Matter sign; the other was Archbishop Jose Gomez of Los Angeles, president of the United States Conference of Catholic Bishops. On the show, Gerry and I unpack the pope’s statement that “we cannot tolerate or turn a blind eye to racism and exclusion in any form and yet claim to defend the sacredness of every human life.”

We also give an update on the recent arrest of one of the two Italian real estate brokers who profited from the Vatican’s controversial London real estate deal. Gerry explains what role Gianluigi Torzi, the broker who was arrested, played in the deal and what questions remain to be answered in the Vatican’s ongoing investigation.