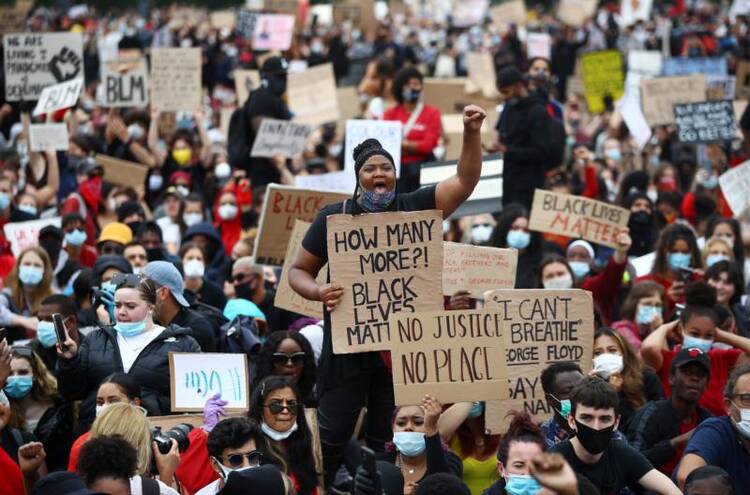 People hold banners in London's Hyde Park during a "Black Lives Matter" protest June 3, 2020, following the death of George Floyd, an African American man who was taken into custody by Minneapolis police and later died at a Minneapolis hospital. (CNS photo/Hannah McKay, Reuters)

MANCHESTER, England (CNS) -- English Catholic bishops say they "stand in solidarity" with anti-racism protests over the police killing of an unarmed U.S. African American, declaring that "racism is an evil which must be opposed."

In a June 3 statement, Bishops Declan Lang of Clifton and Auxiliary Bishop Paul McAleenan of Westminster said the May 25 death of George Floyd also highlighted "systemic racism" in British society. They suggested such racism might help explain the disproportionate number of black, Asian and minority ethnic people who have died in the U.K. from COVID-19 since March.

"We stand in solidarity with our sisters and brothers in the USA as they challenge the evil of racism and the brutal killing of George Floyd," said Bishop Lang, chairman of the English and Welsh bishops' Department for International Affairs, and Bishop McAleenan, the lead bishop for racial justice.

"As the U.S. bishops made clear: 'We cannot turn a blind eye to these atrocities and yet still try to profess to respect every human life. We serve a God of love, mercy and justice.'

"Systemic racism is embedded in our own society," they continued.

"The peaceful Black Lives Matter protests taking place in our towns and cities this week reflect the understandable anger that so many people feel about this," they said.

The bishops added: "As Catholics, we recognize that racism is an evil which must be opposed. We all have a responsibility for actively promoting racial justice. Whenever we ignore racism or dismiss ... people's experience of it, we are complicit in violations of human dignity."

The death of Floyd, 46, while in police custody in Minneapolis has triggered demonstrations in central London since late May, while civic buildings in cities such as London, Liverpool and Cardiff, Wales, have been lit up in purple in tribute to him.

Thousands converged on Hyde Park June 3, holding up banners in support of Black Lives Matter or bearing the words of Floyd as he died: "Please, I can't breathe."